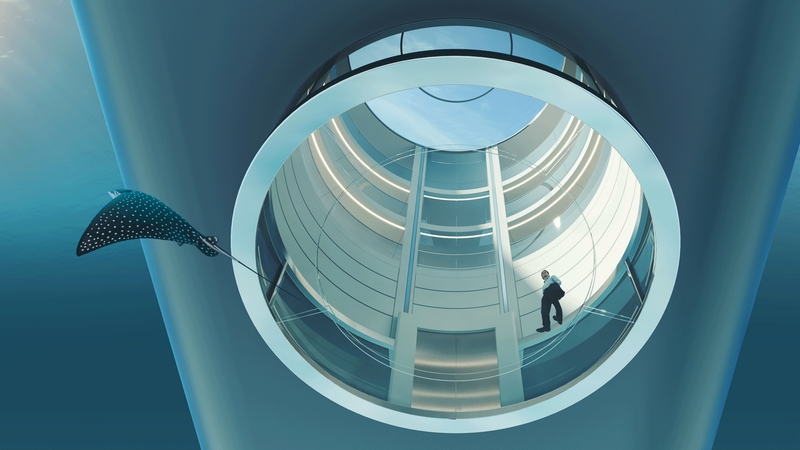 Escape from this Superyacht in your private submarine.

Feadship CEO Jan-Bart Verkuyl and senior designer Ruud Bakker unveil how a bright bunch of yacht brokers imagined the  freedom to Escape from it all. The Escape superyacht concept was presented in the fourth episode of Feadship Unveils, a YouTube series in which the yard revisits designs that were never built.

Escape yacht concept was designed during the yard’s three-day 2014 brokers course which saw attending brokers challenge the yard to design a yacht for “a very extrovert client”. The fictional prospective yacht owner was described as a “rockstar who is also aware of the environment” who wants a “yacht that can escape everything but also to escape from his own boat from a submarine”.

Feadship Escape’s forward-looking design includes a greenhouse, ocean lounge, a moon pool and solar panelling, among other exceptional features. Escape’s bow stores a personal drone beneath opening hatches. Once open, the owner can use the drone to explore air or sea.

Escape’s slow sleek profile includes a submersible craft for exploring the underwater world and a foredeck hangar from which the owner’s personal aerial vehicle emerges. The deck hatch rotates towards the sun to catch the rays on its large PV cells, part of a solar panelling plan covering some 700 square metres and generating 133 kW of energy. 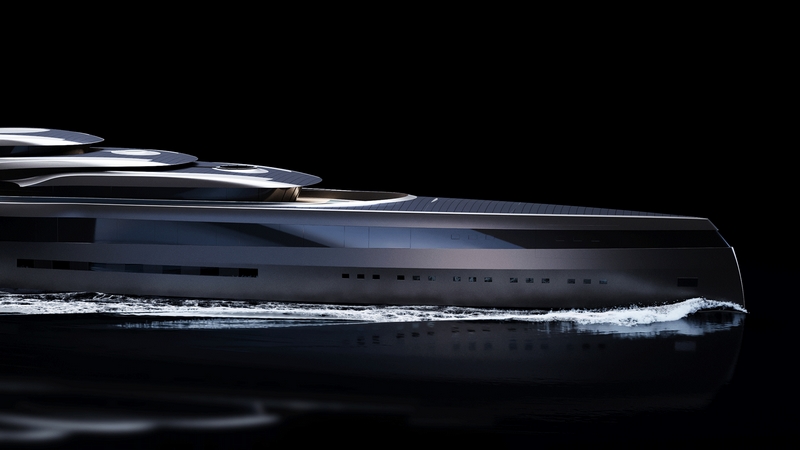 “Designed with the life and style of an eco-conscious rock star in mind, Escape is a super-sleek 110-metre Feadship with a submarine and myCopter craft, an awesome atrium with moonpool and panoramic elevator, and a veritable solar system of green innovations. The ultimate escape yacht in every sense, in true James Bond style! There’s even room to grow your own vegetables,” said Feadship’s team of designers. 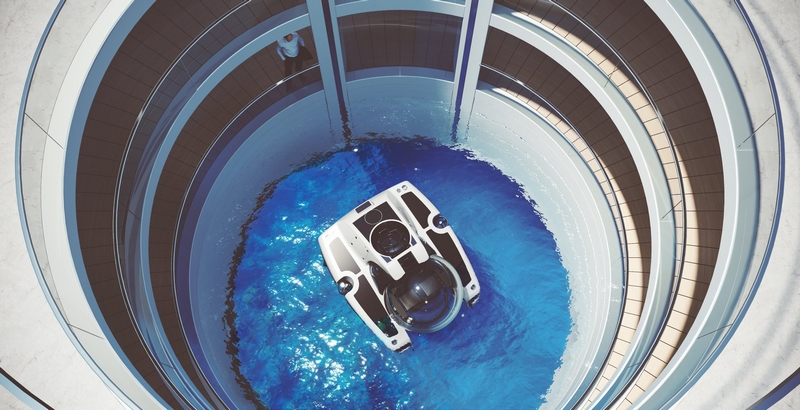 The epicentre of Escape is an amidships atrium that includes a wellness area and a moon pool with seawater which is actually inside the vessel and doubles as a secret submarine landing zone. There’s even a giant slide for inter-deck splashes and a panoramic elevator descending into the sea. The atrium is more than just a visual wow factor: it serves as a place for the owner and his friends to gather, replacing the function traditionally held by lounges.

“It’s quite a big boat but very low and sleek with lots of surfaces for solar panelling,” said Feadship Senior designer Ruud Bakker. The atrium which stretches down through the decks of the boat is a standout feature. Located in the middle of the boat, the atrium looks down into the moon pool, which allows sea water inside the boat.

“You can dive in there and swim out of the boat. You can close it off and have it as a safe swimming pool for the children or you can launch your submersible there,” explained the superyacht’s Senior designer. 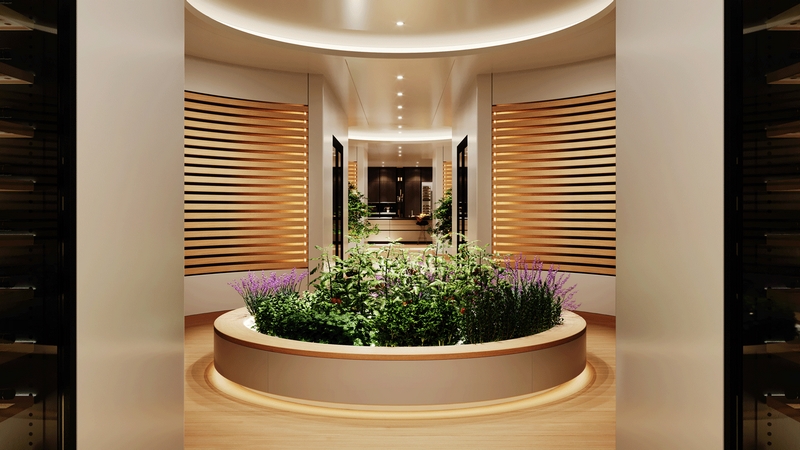 Care for the environment is taken to the next level on Escape.

This includes green innovations, such as an enthalpy wheel to pre-cool the AC intake with exhaust air, reheating of AC air with waste heat from the generators and hybrid propulsion, as predicated on the Feadship Future Concept Breathe.

These innovations offer fuel consumption savings of up to 35%, excellent manoeuvrability at full speed, silent electric cruising and a wealth of redundancy options. The owner will also use his sub to research the status of the oceans in which Escape cruises. 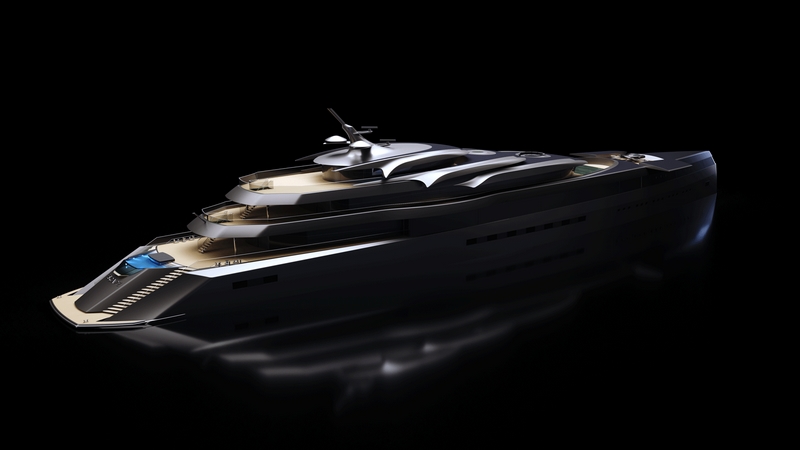 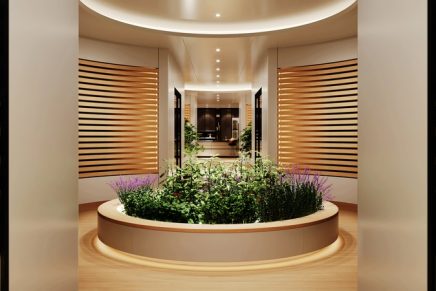 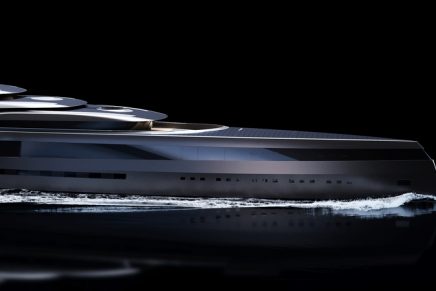 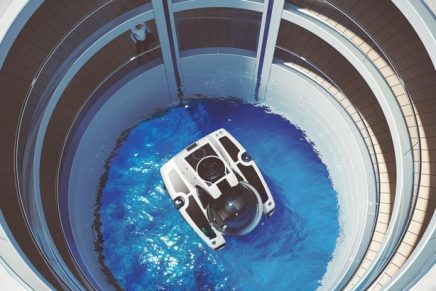 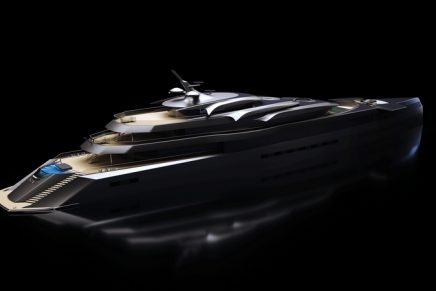 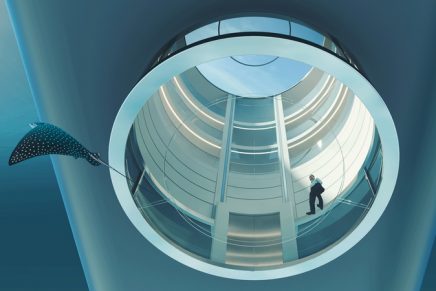