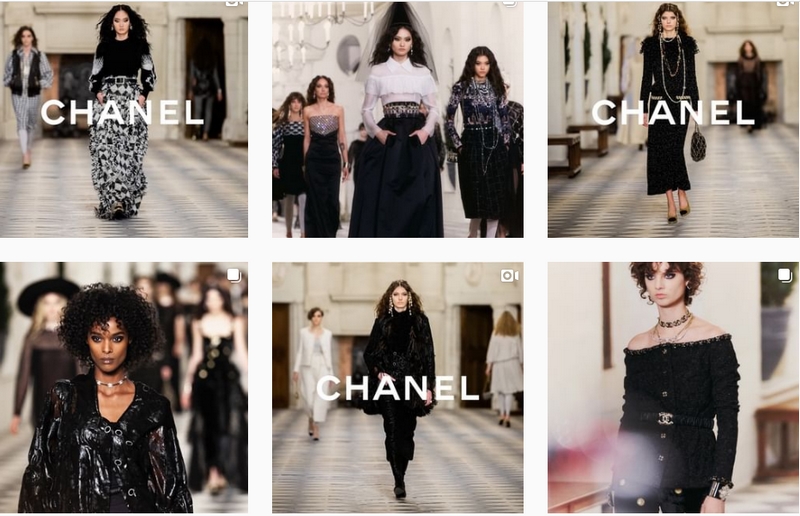 This article titled “‘It’s about the emotion’: why Chanel hired a chateau for a catwalk show with no guests” was written by Jess Cartner-Morley, for The Guardian on Thursday 3rd December 2020 18.27 UTC

How important is a catwalk show to a fashion house? Important enough, in the case of Chanel, to take a team of 300 – including the actor Kristen Stewart, the photographer Juergen Teller and a small army of models – to put on a show in one of the most magnificent chateaux in France, despite an audience capped at zero.

Chanel had hoped to welcome 200 guests to admire chic black-velvet coats, rich damask gowns with lace collars and double-ply cashmere embroidered with double-C logos on a promenade across Chateau de Chenonceau’s 60-metre ballroom, which spans the River Cher. This proved impossible, but – in contrast to May, when a planned show in Capri was replaced by a digital-only presentation – Chanel chose to go ahead with the Métiers d’Art event on Tuesday, even though it was viewed only online.

“The show is just the same as it would have been, but without an audience,” said Bruno Pavlovsky, Chanel’s president of fashion. “We don’t see any other way to talk about the collections, other than having a show. We need to have impactful events to maintain a strong bond with our audience.”

Those who would have been on the guest list for the event, which showcased the craftsmanship of the 38 specialised ateliers supported by Chanel, instead received a coffee-table book of Teller’s photographs of the chateau and a QR code revealing an audio file of the actor Keira Knightley telling its history. “We are trying to give almost a backstage experience,” Pavlovsky said.

The takeover of one of France’s top tourist attractions served as an effective reminder of Chanel’s status as a leader of French style, but the chateau’s place in the history of women in France is equally significant.

Known as the Chateau des Dames, after the women who designed it, much of its architecture was commissioned and conceived by Catherine de’ Medici. She was one of a roll call of formidable chatelaines including Louise Dupin, who employed Jean-Jacques Rousseau as a secretary and helped save the chateau from destruction during the French Revolution.

Chanel is a female-founded house and the uncompromising spirit of Coco Chanel– who pioneered comfortable clothing in which women could walk, ride and travel and once said “I decided who I wanted to be and that is who I am” – is back in the spotlight after the death of the larger-than-life character Karl Lagerfeld. “Virginie [Viard, who replaced Lagerfeld as creative director,] is getting stronger and stronger,” said Pavlovsky. “She is a woman designing for women and that is very visible in her collections.”

With the world in thrall to the chessboard chic of Netflix’s The Queen’s Gambit, the chalk-and-slate checkerboard ballroom floor was a very on-trend setting for a collection that, like Viard’s wardrobe, was mostly monochrome and finished with rock-chick black eyeliner. Elegant bouclé tweeds in the pale limestone shades of the Loire architecture were worn with black-velvet chokers and pearl-studded corset belts.

Viard recently told Vogue that taking over from Lagerfeld, her boss of three decades, was “as if my grandparents had given me their fabric house and I wanted it to be the best – I wanted them to be happy. I’m often asking myself: ‘Karl, what do you think? Is it OK?’”

Pavlovsky said Viard was “very flexible” and had taken this year’s complexities in her stride. He added that Lagerfeld “would have hated this year. Karl was a communicator. He would not have been happy to be stuck at home.”