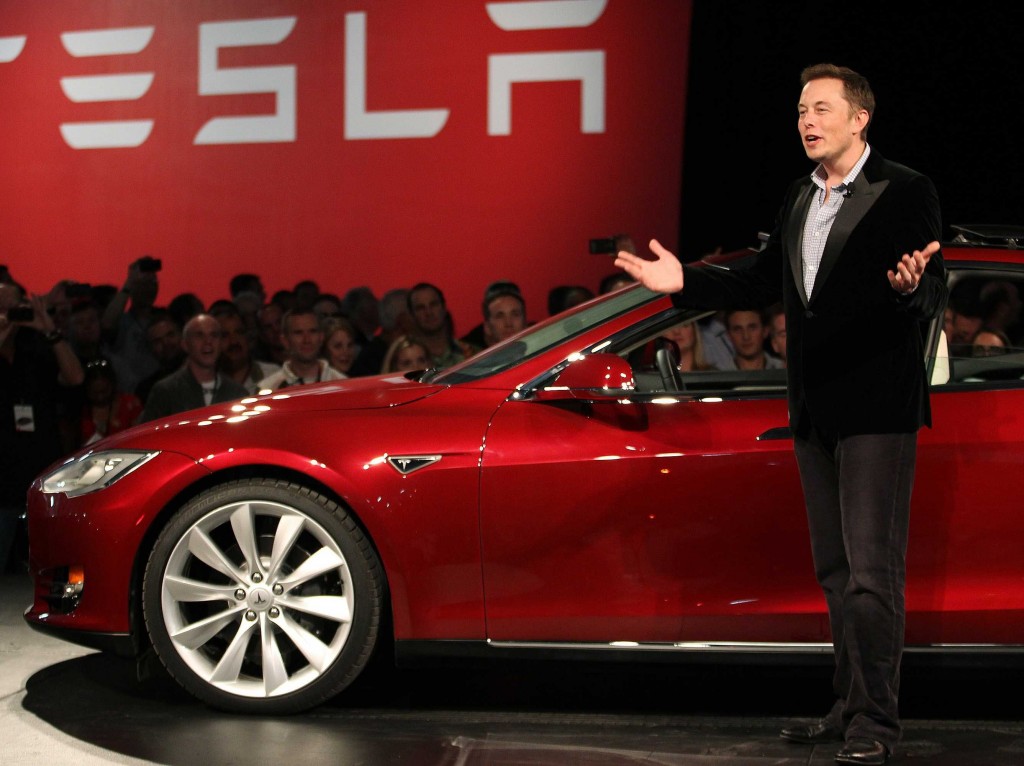 This article titled “Elon Musk: oil campaign against electric cars is like big tobacco lobbying” was written by Adam Vaughan, for The Guardian on Thursday 24th October 2013 14.24 UTC

Attacks on electric cars by the oil industry are on a par with misinformation campaigns promoted by big tobacco companies and vested interests undermining climate science, according to Elon Musk, the serial entrepreneur who founded PayPal and the brains behind both the space exploration company SpaceX and the electric sports carmaker Tesla Motors. The oil giants, he reckons, are attempting to sow the seeds of doubt.

Speaking before the opening of Tesla’s new luxury store in the Westfield shopping mall in Shepherd’s Bush, London, last night, Musk told the Guardian: “It’s kinda like the battle against ‘big tobacco’ in the old days, and how they’d run all these ads about how tobacco’s no problem.

“Ninety-nine per cent of scientists can agree on one thing, but in the public mind [lobbyists] try to convey that scientists disagree. Technically true, but absolutely misleading,” he said.

That is substantially more than the £16,000-£30,000 price range at which most other electric cars have been pitched. But Musk still has his eye on the mass market. The next Tesla car, currently dubbed “Gen3”, would cost less than £35,000 and will probably arrive within three years. The Model S, he said, would subsidise that car’s development.

Musk, who is said to have inspired the character of the charismatic genius Tony Stark in the Iron Man films, does not think governments are doing enough to support the electrification of cars, despite a grant scheme that knocks £5,000 off the price of new plug-in vehicles.

Musk is standing by recent comments that hydrogen fuel-cell cars are not a plausible rival to battery-powered models like those made by Tesla. “They’re like obviously bullshit, it’s not even a question mark in my mind … In the case of hydrogen fuel cells, take the current state of the art, and compare how much space, weight and cost is associated with the powertrain of a fuel cell, and compare that with the Model S … it loses on every category.”

Musk, 42, considers himself an environmentalist, but says he is not “ultra hardcore”.

“That’s not me,” he says. “I sort of think we should figure out how to enjoy life and not have environmental catastrophe.”

He rates himself as “greenish” in his personal life. He switches off lights when he leaves a room, and has installed solar panels on his home, but “it’s not like I’ve got LED lights everywhere, and I’m not a vegetarian.

“Trying to convince the population to have some monk-like existence is simply unrealistic,” he says.

Born in South Africa, Musk was a teenage computer nerd with degrees in physics and business when he moved to California to study for a PhD at Stanford. He then quit within days of embarking on his studies to become an entrepreneur.

His first venture was an internet city guide, which he sold aged 28, banking m. Paypal followed, which eventually brought him an even larger fortune, and then came SpaceX, which aims to send people to Mars within 20 years.

Tesla Motors, which takes its name from the 19th-century physicist, Nikola Tesla, was venture number four. Musk joined as an investor in its early days, and the firm made its first production vehicle – the two-seater Roadster – in 2006.

The company, based in Palo Alto in California’s Silicon Valley, was listed on Nasdaq in 2010 and the Model S hit the road in 2012. Celebrity owners Ben Affleck, Morgan Freeman, Stephen Spielberg and Demi Moore have generated publicity, as have the firm’s “stores” – in premium shopping districts rather than traditional dealerships. The shares have nearly quadrupled in value this year.

A few weeks ago the company’s image took a hit when footage emerged of a Model S on fire after a piece of metal had gone under the car and made contact with the battery.

The driver escaped unharmed, but the incident led Musk to take to his blog in defence of the car, which has been billed as one of the safest ever made. “Had a conventional gasoline car encountered the same object on the highway, the result could have been far worse,” he wrote.

Musk told the Guardian that the company was committed to Europe, and he expected to be manufacturing electric cars in Europe “probably” within five years. They are currently made in Fremont, California, with some assembly carried out in the Netherlands. “It’s a bit silly transporting cars across the Atlantic,” said Musk, who also envisages a new European technical centre, focused on research and design.

The firm also plans to build a network of “superchargers” in the UK – charging points that can replenish the battery within 30 minutes – ready for when its right-hand drive Model S cars are delivered to customers in spring next year. The cars will eventually be powered by solar panels, he said, which should generate more power than is used by the cars recharging.

“What we’re trying to convey is that, if you have Tesla Model S, you’ll be able to drive for free, for ever, on sunlight.”

When you drive the Model S, it quickly – very, very quickly – becomes clear that it’s the opposite of the electric car stereotype of a Noddy car that doesn’t go very fast or very far. It’s packed to the gills with state-of-the-art technology, from the enormous string of batteries that make up the entire floor and enable its 300 mile-plus range, to the in-car entertainment and navigation system whose touchscreen makes an iPad look positively puny.

The exterior is classy and understated, rather than screaming, “No combustion engine!” as, say, the G-Wiz and BMW’s new i3 do. Tesla’s other car, the Roadster, is the sort to turn heads and attract Instagramming hordes, but the Model S barely raised eyebrows during a few hours in central London.

More than anything, the car is memorable for its astonishing acceleration. Unlike conventional cars, electric cars give instant torque and that, combined with the powerful motor here, means that putting your foot down results in a truly exhilarating rush.