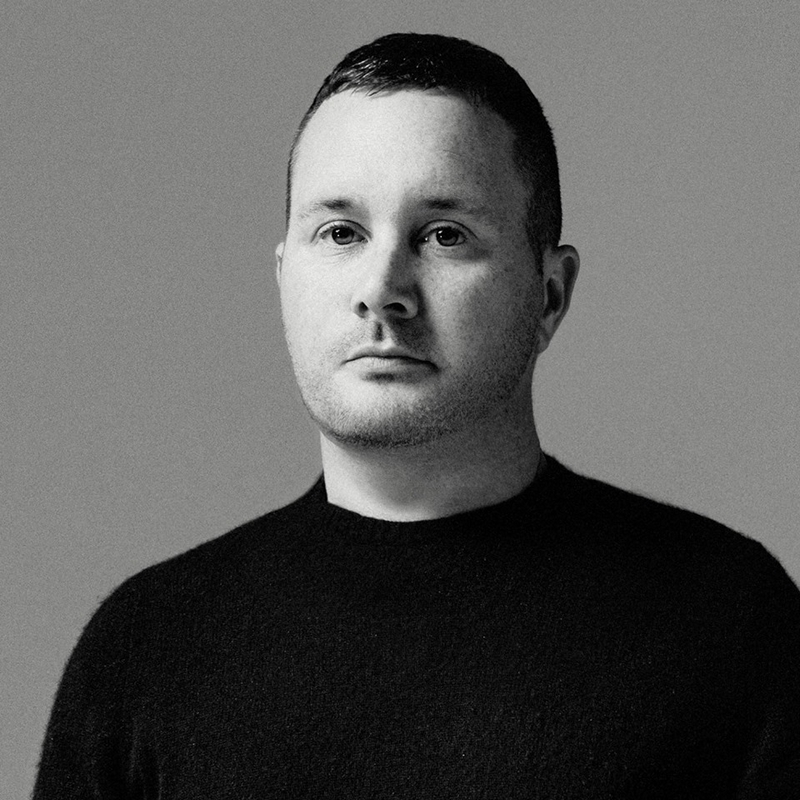 This article titled “Dior’s Kim Jones: ‘These jobs are not an easy ride’” was written by Scarlett Conlon, for The Guardian on Saturday 6th April 2019 09.00 UTC

Yesterday, Kim Jones spent the day at home in bed watching Family Guy. “I just wanted something that stops me thinking about everything,” he says with a smile. It’s his way of conserving energy. As menswear artistic director for Dior, he produces four, 50-odd-piece collections a year, and is due to travel to three continents in the five days after we meet; but this very low-key day off is also characteristic of a particularly down-to-earth fashion star.

In a world where luxury designers run daily beind-the-scenes streams on their social media channels and are frequently found on the cover of glossy magazines, the half-Danish Brit is something of an anomaly. His Instagram account (which boasts a relatively modest 593,000 followers) promotes his work rather than his private life, other than photos of his four dogs Cookie, Dexter, Lulu and Gugu. “People know I’ve got dogs, they know I like to travel, but they don’t really know me,” he says. “I think that’s one of the most difficult things, when people assume they do and prejudge you. I just deal with it,” he shrugs. “Luckily, I have friends who are quite famous who I can talk to about it.”

This is an understatement: he counts David Beckham, Kate Moss and Kanye West as close friends (West used to kip on his sofa 13 years ago, whenever he came to London), but the fame game isn’t really for him. “I do my job because I love it,” he says, “not because I want to be famous. I think there are a lot of people who want to be very famous and don’t do their job as well as they should.” He won’t name names.

We meet in Jones’s spacious new London studio, two weeks shy of his first anniversary at Dior. He sits at a large table, finishing off soup from Pret a Manger in his signature working outfit of black cashmere sweater (by the luxury Italian brand Loro Piana), black trousers, a wristful of bracelets acquired on his travels, Daytona Rolex watch (“a design classic”) and Nike trainers. “This is beautiful, look,” he says, pulling at his jumper, “and it does the job. All I do is think about clothes, so I don’t want to think about them for myself. I wear a uniform so that I can concentrate on what I’m doing.”

As we chat, he is friendly but to the point. “I’m not telling you how old I am,” he shakes his head when I hazard an (educated) guess that he might be in his 40s. “No,” he says with a smile, “younger than that.”

He is, in fact, 39, but thinks age is irrelevant. “Diana Vreeland was the one who said you’re as young as your brain, and Karl Lagerfeld was a perfect example of that, too,” he says. “Being a designer and understanding what people want to do is about your attitude rather than age.”

On the top floor of a period building in central London, the studio is simple, with wooden floors, white panelled walls and tall ceilings. Jones only recently moved in, and his vast fashion archive, including pieces by Rachel Auburn and Leigh Bowery, Andre Walker and Vivienne Westwood, still hangs on nondescript rails along one wall. His design team are based in Paris, but spend a week or so in London every now and again (“It’s good for them to mix it up,” he says). Today, it’s just Jones and a couple of colleagues – all disarmingly low-key for a multi-billion-pound operation.

Already, Jones has kick-started several major menswear trends. Streetwear as high fashion? His idea, with a 2017 Supreme x Louis Vuitton collaboration that set the benchmark for cross-genre brand collaborations (Jones had joined the French fashion house in 2011). The current renaissance of tailoring, introducing the joys of a suit to a new generation? Also his idea. He stays on the cutting edge by surrounding himself with people of all ages, he says. “I hang out with people who are 18. I’m friends with a lot of the models who work with us, and I ask them what they are into, what are they looking at, what music they’re playing.”

I’m fast. Being indecisive shows weakness of character. If people don’t know what they like, they don’t know themselves

When Jones was appointed at Dior last March, he became the first British designer to take on the top job there. Dior CEO Pietro Beccari said he was “confident that he will continue to further develop Dior Homme on a global scale”, while his friend Naomi Campbell was a little less reserved: “#Congratulations @mrkimjones. I’m happy for you and can’t wait to see the fire you set @diorhomme… YES YOU CAN !!!!” she posted on Instagram.

In the year that followed, Jones has accepted Beccari’s mission to engage new global markets. He staged an extravaganza in Tokyo and two in Paris, the first of which had the most celeb-packed front row in the brand’s history, courtesy of Jones’s little black book. Moss and Campbell were there to witness Prince Nikolai of Denmark open the show (a nod to Jones’s maternal heritage), as was Victoria Beckham, A$AP Rocky, Gwendoline Christie, Lenny Kravitz, Lily Allen and others. “I think [Dior] was surprised at how many celebrities wanted to come,” Jones says.

His career began with a splash in 2002, when John Galliano bought half Jones’s graduate collection from Central Saint Martins. He established a short-lived eponymous label to critical acclaim shortly afterwards, winning the British Fashion Council’s (BFC) Menswear Designer of the Year award in 2006. This was followed by what he calls his dream job as creative director at Dunhill in 2008, which saw him hone his reputation as a formidable tailor, winning a second BFC award in 2009. In 2011, he was hired on the recommendation of Marc Jacobs to design menswear at Louis Vuitton, where he stayed until last year. It’s a trajectory that would make fame-hungry hustlers weep, yet Jones has remained largely under the radar outside the fashion industry.

“His graduate show had an air of confidence about it – he knew what he was doing immediately,” says his friend and Fashion East founder Lulu Kennedy. This confidence, he says, came from his mentors, the fashion designer Alexander McQueen and the famously tough Central Saint Martins fashion professor Louise Wilson. McQueen died in 2010; Wilson in 2014. “Both of those two people going had a big impact on me,” says Jones. “I cried for days. They believed in me and pushed me. We still do this thing where we ask, ‘What would Louise say?’” What’s the answer? “I think she would know where to cut the bullshit. Where there’s talent and where there’s ego. Who’s doing a good job and who’s not.”

Financial results remain top secret, Jones says, “but they’re very, very good. More than expected. A lot more.” He attributes his ability to turn a profit to his decisive nature. “I am very fast. I’ve always been like that. Being indecisive is an awful thing and shows a weakness of character. You need to know what you like. When people don’t, they don’t know themselves.”

That speed was on display in Paris this January, when the show had to be brought forward by 24 hours to avoid the gilets jaunes protests. The day before a catwalk show is usually the period when an atelier has to pull an all-nighter to finish the collection, but he was relaxed. “We’re quite organised, so it’s not been too bad to change – a few guests missing perhaps,” he told the Guardian at the time.

On the catwalk, his models stood still on a slow-moving conveyor belt that rolled past the audience, allowing them to inspect every detail. “I looked back at the couture salons where the models stood there and people looked at the clothes – that’s why I wanted a moving runway. I think everyone was a little blown away by that. You take a risk moving [houses], but you challenge yourself. That runway was my favourite thing I have ever done,” he says. Vogue agreed: “Jones moved menswear to a brilliantly lit place where a vision of classical cut, youth and modernity finally gelled,” wrote its critic Sarah Mower.

When Jones left Louis Vuitton, the label appointed Virgil Abloh as his replacement. While Abloh’s lack of formal training and admission that he doesn’t identify as “a designer” caused waves in the industry, Jones has been nothing but supportive of him, attending his first show despite being two days away from his own debut. “I’m really happy that Virgil is at Vuitton,” he says. “A lot of designers may criticise him, but they don’t understand his cultural power. What he does is interesting and exciting, and he gets a lot of kids up wanting to do something – that for me is the most important thing. His communication with people is exceptional, and you can’t fake that.”

What Jones gives out in support, he gets back in kind. One of his most loyal friends is Kate Moss. “Kim is like family,” she tells me. “He’s so talented and has remained really true to himself.” Similarly, David Beckham emails to tell me he’s inspired by Jones’s work ethic: “I remember the first time I went into Louis Vuitton to see Kim at work and I was so impressed. I’ve seen him work really hard for so many years, and to see all of that come together in Tokyo was really special.”

Not that Jones is entirely immune to personal criticism on social media. “We all get trolled because we’re in the public eye,” he says matter-of-factly, adding, “I’m sensitive – I think everyone is.” But he is pragmatic about it. “It’s jealousy – go and work hard, go and sacrifice a lot of things in your life to do what you want to do and love. These jobs are not an easy ride. I wouldn’t change it for the world – I have a really amazing life, but I’ve worked and sacrificed for it.”

Whose opinion does he care about? “The people I care about,” he says, without giving anything away. “And my bosses. I work for them and I don’t pretend I don’t. They own it, it’s not mine, so I have to respect the feedback.” He adds, decisively: “But they are very, very happy.”

• If you would like a comment on this piece to be considered for inclusion on Weekend magazine’s letters page in print, please fill in the form below.