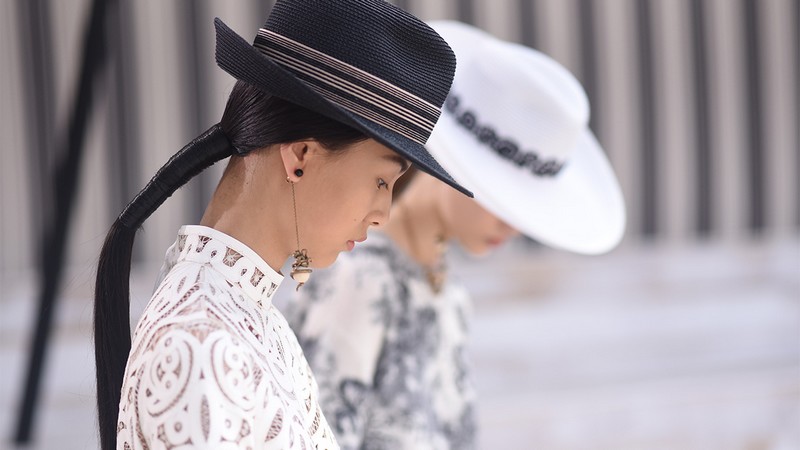 This article titled “Dior gallops back into the spotlight with a Mexican rodeo” was written by Jess Cartner-Morley, for The Guardian on Friday 25th May 2018 20.00 UTC

For the second week in a row, a venerable French fashion house has taken the reins of high fashion.

After last weekend’s surprise of a Givenchy royal wedding dress, Christian Dior on Thursday recreated a Mexican rodeo in a French chateau near Paris, at a catwalk show for 725 guests. The Dior muses for this season’s cruise collection are the escaramuzas, female riders who compete in the male-dominated rodeos, performing daredevil manoeuvres at breakneck speed while riding sidesaddle. Eight of them, their Christian Dior emblazoned belts matched to their wide-brimmed hats, opened the show performing with their horses.

Glowering clouds broke into a thunderstorm as the show opened, sending models on to a catwalk slick with driving rain. Fortunately, the tough attitude of the collection had been translated into an all-flat-shoe policy, and was adopted by models who winked at the audience while their sodden ponytails flicked water as they walked. “Life is a rodeo,” said creative director Maria Grazia Chiuri. “You have to learn to stay in the saddle.”

“Usually, the female role in rodeo culture is to be there to support their husbands and sons, but these women have decided they wanted to do it themselves,” the designer said before the show. “But they do it in traditional dress, because they don’t want to give up their femininity. Women are always being made to feel they have to change who they are to fit in. This collection speaks about that.”

The gorgeously attired expert equestriennes who opened this show represented Dior bringing in the cavalry. This was a moment to reassert its identity as the most feminist fashion house. With Givenchy creating the wedding dress for the first self-proclaimed feminist princess, Dior must now remind consumers that Chiuri, who became Dior’s first female creative director in 2016, has overhauled a house that once stood for demure, seen-but-not-heard femininity and redefined it as fashion week’s most woke brand. Chiuri’s first Dior show featured a “We should all be feminists” slogan T-shirt that became a cult hit, while the message “Women’s rights are human rights” featured on the backdrop for her most recent show in Paris.

“This collection is very Mr Dior – very soft,” said Chiuri. “The point is that you don’t have to renounce your femininity.” Dressed in a black silk blouse and dark jeans, the designer said she had been talking to her recently graduated daughter about dressing for the workplace. “I would like that she would feel she can be herself,” she said.

“I speak about women, because that’s what I know about,” Chiuri said of the messaging of her collection. “And I work with female photographers from all over the world, because I want to include their points of view. I believe in the idea of a community of women.”

The strategy of Chiuri’s Dior is based on making female empowerment look glamorous. Enter, then, the escaramuzas, who do battle in the adrenaline-charged rodeos wearing ornate costumes that celebrate both their femininity and their sportsmanship. The sport requires nerves of steel and the escaramuza aesthetic is drawn directly from the uniforms worn by the Adelitas, female soldiers who fought in the Mexican revolution. The ornate traditional embroidery is all done by hand, and the finished costumes so multilayered that dressing for a competition can take two hours.

This translated on the catwalk as ample-skirted gowns with high, tight waists accentuated by leather belts or by Dior’s emblematic Bar jacket, with its exaggerated hip curve. Black gowns glinted with silver metallic trim; white dresses were toughened up with wide black belts. Toile de Jouy fabrics, beloved in traditional French interior design, featured tigers and serpents rather than bluebirds and teacups. Chantilly, the location of the chateau that hosted the show, was referenced in flounced and pleated lace.

Chiuri believes luxury fashion is political in so far as it is a global industry built on women’s desire to shape and control how the world sees them. Her strategy has proved that activism can be good business. Figures posted in 2017 showed a 17% rise in sales revenue over the same period in 2016. Millennial customers whose interest has been piqued by Chiuri’s vocal feminism have fallen for her popcorn-y take on the Dior aesthetic, which draws as much from Sarah Jessica Parker’s Sex and the City look – slogan T-shirts, full skirts, logo-printed bags and eye-catching shoes – as it does from the New Look years. Those watching this show from the Dior boardroom will no doubt have been pleased to note that the feminist-equestrienne theme provides an excellent platform for the Saddle bag, a Dior classic that Chiuri has reprised.