Maria Grazia Chiuri unveiled Dior autumn-winter 2018-2019 haute couture collection for the Dior House in the gardens of the Musée Rodin in Paris. 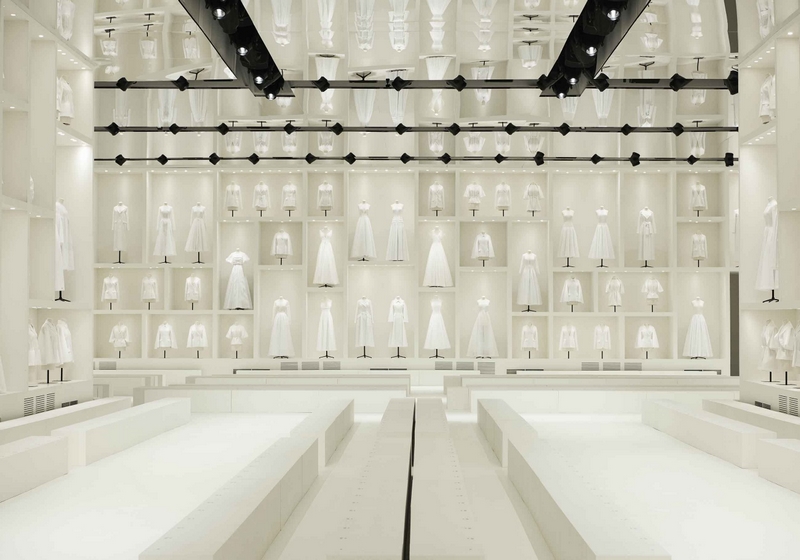 This article titled “Dior celebrates haute couture as an antidote to fast fashion” was written by Morwenna Ferrier in Paris, for theguardian.com on Monday 2nd July 2018 18.06 UTC

As has become tradition, the Christian Dior couture show took place at Paris’s Musée Rodin, with the collection itself shown inside a large, white cube within the grounds. Guests entered through the museum, walking past Rodin’s The Kiss and beds of roses crisping up in the July heat.

Inside, bright lights lit up the space, while large display units containing various white tailored garments stretched from floor to ceiling. The overall effect was the intimate feeling of an atelier – and one which casted us, the guests, as clients at a fitting. If last season’s interior (and collection) was themed around fantasy and nature, this season’s has been designed to be more real, more behind-the-scenes – and more grounded.

Two years ago Maria Grazia Chiuri, the artistic director of Dior, created a T-shirt emblazoned with the message “We should all be feminists” for her first ready-to-wear show. If fashion echoes the mood of the times, then she was up to speed again with this collection, albeit within the confines of couture.

The question hanging over this collection’s concept – “Is it possible to celebrate haute couture while also offering a critical reading of it?” according to the show notes – was arguably controversial given the astronomical prices of couture. Still, she concentrated on answering it. First by suggesting couture is “a concept” and by suggesting it could be modernised, either using lighter, more wearable fabrics, all the while using the clothing exhibited on the walls as reminders of how the pieces came to be.

“L’atelier is a space of the mind but also a real space,” Chiuri said backstage, before highlighting the precariousness of the atelier in a world of fast fashion. “I wanted a collection that is not so visible on social media – we live in the moment, the right now.”

And so under a mirrored ceiling that stretched the length of the room – which conversely became well utilised on social media – she sent out a collection that started with a classic couture structure and ended with newness and fluidity.

The first look, a midnight blue three-piece, herringbone suit, with a spin on the famous Dior bar jacket (cinched waist, padded hips and – update – batwing sleeves) set the tone. Tweed coats and leather berets with tightly wound ponytails peeking out, alongside form-fitting strapless dresses in chiffon and crepe, which came in blue and taupe. Sultrier greens and blacks and gold gowns and coats followed, arriving in different textures, some covered with tapestry fabric, others with flowers in relief.

As the show continued, the skirts grew fuller and the fabrics became more modern, with gowns switching from chiffon to lace, to scuba. The final three dresses were jewel-coloured, strapless dresses – Gallic evening wear as imagined by Dior – except made from modern-sounding silk scuba. “The clothes maintain the shape but actually, they are different. It is hard to see,” she said. For one, these final three pieces were light, made from one piece of fabric and built without lining.

The collection tallies with a new exhibition opening next spring at the V&A – Christian Dior: Designer of Dreams – which traces the history of the couturier and those that followed – Chiuri included – from 1947 to the present day. A fan of fashion exhibitions (“I wept at Frida Kahlo!” she said), Chiuri is heavily involved in the exhibition which is moving from a stint at the Museum of Decorative Arts in Paris.

Backstage Chiuri talked with amazement at the way couture used to be made: “They used hair to pad out the skirt, and … non … I don’t know where the hair came from!”

She described herself as “not from the satin generation” of her predecessors and discussed the way women wear couture. As is tradition, the collection was inspired by a woman – this time the cultural critic Alison Bancroft, who views fashion as art and explores what style says about identification and femininity.

In January, LVMH – the parent to Christian Dior, as well as Louis Vuitton, Givenchy, Céline and Loewe – reported record-breaking annual sales of $49bn for the 2017 fiscal year. Dior may be in good financial waters but couture is still not well understood outside of fashion circles, said Chiuri. “People don’t know what it is,” she shrugged. “We want to explain to them the value of couture … the risk is, if we don’t promote couture, we lose part of our culture.”