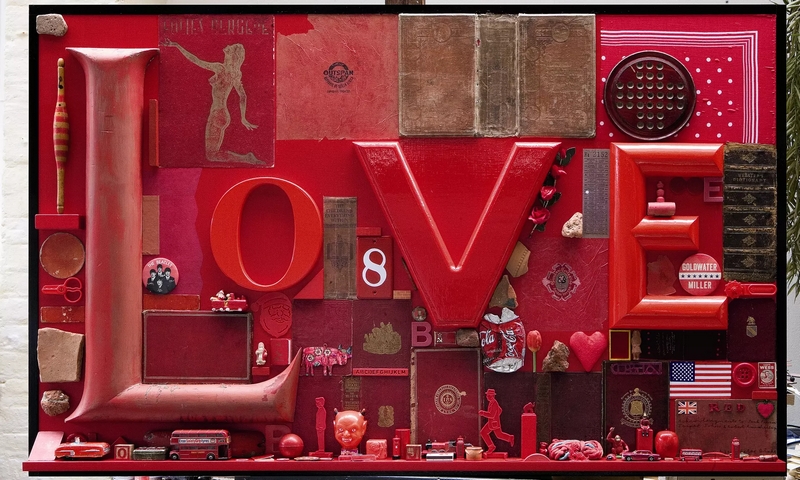 Love by Peter Blake, one of six works donated to the nation by Frank and Lorna Dunphy. Photograph: Pallant House Gallery

What looks like a black bin bag full of rubbish but is a disconcertingly real-looking bronze sculpture by Gavin Turk is one of six works being donated to the nation by Damien Hirst’s former business manager Frank Dunphy.

Arts Council England on Tuesday announced details of the Dunphy gift being made under the cultural gifts scheme that allows people to give public museums and galleries artworks in exchange for a tax reduction.

Dunphy and his wife, Lorna, are giving six works by Hirst, Tracey Emin, Rachel Whiteread, Peter Blake and Michael Craig-Martin. They will generate a total tax reduction of £185,100.

The works will go to the Pallant House Gallery in Chichester, West Sussex, the couple’s local gallery.

Dunphy said no organisation was more deserving of the works and he was more confident of the public being able to see them. “We love our connection with Pallant House Gallery and the fact that we can come and see the works when they are on show.

“We prefer to give to a smaller gallery than one of the nationals where half of it will never be shown. We’re so happy to make this gift … really proud.”

The six works were all initially bought for display in the couple’s homes, including one in nearby Bognor Regis.

The Hirst work, titled Bognor Blue, is from his 2008 butterfly series, which involved him fixing dead butterflies on to monochrome gloss canvases, a riff on how we all paint something and then insects fly in and mess it up. In this case the result is aesthetically pleasing.

The Turk work is called Dump, a 2004 limited edition of a what looks no more than a full black bin bag. If anyone were to kick it they might, painfully, discover it was cast in bronze.

Some of the works are already on loan at the gallery, including an edition of Emin’s Roman Standard (2005), a small bronze bird perched on top of a 3.5-metre pole; and Whiteread’s Untitled (For Frank) (1999), a plaster relief of bookshelves.

Simon Martin, director of the gallery, said they were thrilled to receive the gift. “Pallant House Gallery is often described as a collection of collections and this remarkable addition will enable us to present the continuing history of British art from the 20th century to the present day.”

Dunphy was Hirst’s business manager from 1995 to 2010, and his acumen helped make Hirst his fortune. About 200 works from Dunphy’s art collection are due to be sold at Sotheby’s on 20 September.

The cultural gifts scheme was introduced in 2013, an extension of the acceptance in lieu scheme, allowing people to give in their lifetime. Notable gifts have included an archive of 885 items relating to Isambard Kingdom Brunel, a collection amassed by the entrepreneur Clive Richards and given to Bristol’s new Being Brunel museum; and a Wright of Derby portrait given to the in Bath by its former chairman David Posnett.