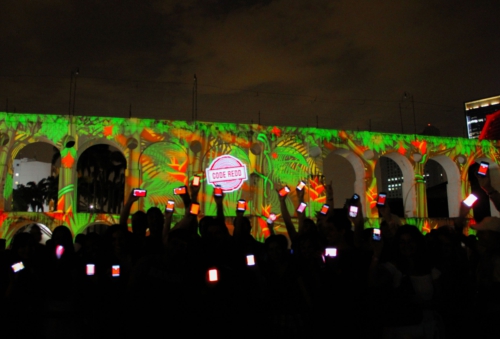 In the heart of Rio thousands of people from around the globe gathered on June 20 o support the launch of Code REDD, an emergency action campaign to save the threatened forests of the world, by dramatically increasing the demand for REDD+ (Reducing Emissions from Deforestation and Forest Degradation) emission reductions.

Code REDD provides a solution to two of the most pressing issues of our time:

– How to stop the deforestation that is stripping the planet of its biodiversity, impoverishing forest communities and releasing massive amounts of pollution that are changing our climate forever.

– How to allow the marketplace to continue to provide energy goods and services to our growing global population without accelerating the negative impacts on our climate.

The celebration of the Code REDD Campaign launch got under way as the historic Arcos da Lapa aqueduct in the heart of Rio was transformed by Obscura Digital with an architectural projection experience of visuals and sound followed by the premier of a Code REDD film that demonstrated Code REDD’s solution to stop deforestation now.

The event was designed to enlist widespread grassroots support for the Campaign. The film asked the crowd to demonstrate support by going online to coderedd.com/glow to make their phones flash red with a digital “emergency code.” The experience drew a parallel between the digital transformation of Arcos da Lapa and the way Code REDD aims to transform how corporations, landowners, governments and the general public unite to save the threatened forests of the world.

“Deforestation is an economic problem,” stated Karin Burns, Executive Director of the Code REDD Campaign. “REDD+ is aviable economic solution that can scale to meet the massive scope of this challenge.”

Earlier that day, on the eve of the United Nations Conference on Sustainable Development, Rio+20, Burns and Mike Korchinsky, Founder of Code REDD, hosted a press conference at the Royal Tulip Hotel in Rio de Janeiro. UNESCO, major multinational corporations, REDD+ project developers, and representatives of indigenous forest communities came together to announce their participation in the global launch of the Code REDD Campaign.

“If the forest is gone, it is gone forever. So immediate action like the Code REDD campaign is crucial and Allianz is glad to be part of it,” said Martin Ewald, Investment Manager at Allianz Climate Solutions.

“REDD has really worked in our community of 150,000 people,” said Chief Pascal Kizaka, of Kasigau, Voi District, Kenya. “The project has greatly improved the standard of living through the funding of water projects, school bursaries and education, and job creation. There is more food, better hygiene and clothing and better access to medical care.”

“We assess all our projects on normal commercial project finance terms and they stack up, for the Bank, the communities, the trees and the animals. Simply, REDD+ is the right thing to do,” said Kevin Whitfield, Head of Carbon Finance at Nedbank Capital.