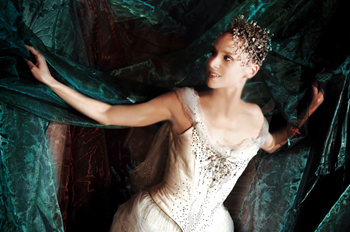 Swarovski has armed Christian Lacroix with more than 2 million crystals to create costumes for “La Source,” a ballet choreographed by Jean-Guillaume Bart and running for 18 performances at the Opéra Nationale de Paris through Nov. 22.

The libretto is described as a typical 19th-century ballet, set in Persian palaces populated with elves, nymphs, hunters and slaves. Lacroix more than 100 costumes, including 39 designs, blending ethnic influences, classicism — and a hint of Hollywood. Nadja Swarovski plans to host a dinner in Lacroix’s honor following a performance Nov. 3 at Palais Garnier.