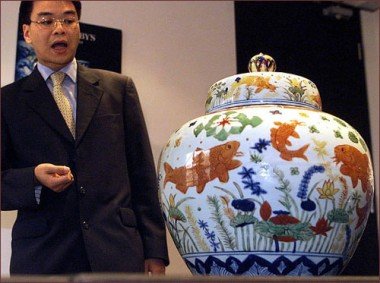 According to The European Fine Art Foundation (TEFAF), in 2011 China finally overtook the United States to become the world’s largest art and antiques market in terms of auction and dealer sales, reports BBC. China’s art auction market generated US$60.8 billion and accounted for 30 percent global market share. The US dropped into second place last year with 29 percent of the market, while the UK remained in third position with 22 percent and France came in fourth with six percent.

As Dr. Clare McAndrew, who compiled the report, told the BBC, “The dominance of the Chinese market has been driven by expanding wealth, strong domestic supply and the investive drive of Chinese art buyer,” said Still, as McAndrew pointed out, China taking the world’s top crown doesn’t mean a smooth ride in coming years, nor will other major art-collecting markets be without their own problems. Said McAndrew, “The Chinese market [will see problems] in how to cope with an overheated market and promote more stable, long-term growth; Europe, with how to maintain its competitiveness in the face of continued regulatory and cost burdens; and the US with the challenge of losing its supremacy in the recent past.”

The Chinese art and antiques auction sector was the strongest growing market worldwide with a dramatic rise of 177% in 2010 and a further 64% in 2011. The driving forces behind the recovery were strong sales in the
Chinese auction market and the rise of fine art sales (over decorative art). The Modern and Contemporary sectors combined to account for nearly 70% of the fine art market. Both continued a strong recovery in 2011, leading them to levels in excess of the boom of 2007-2008.