The most efficient boat motor ever will last a lifetime without maintenance, is four times more efficient than the best electric outboards and makes for a totally silent boat ride. With the launch of the all-electric Candela C-POD boat motor, the Swedish marine tech company Candela is aiming to disrupt boating as we know it. 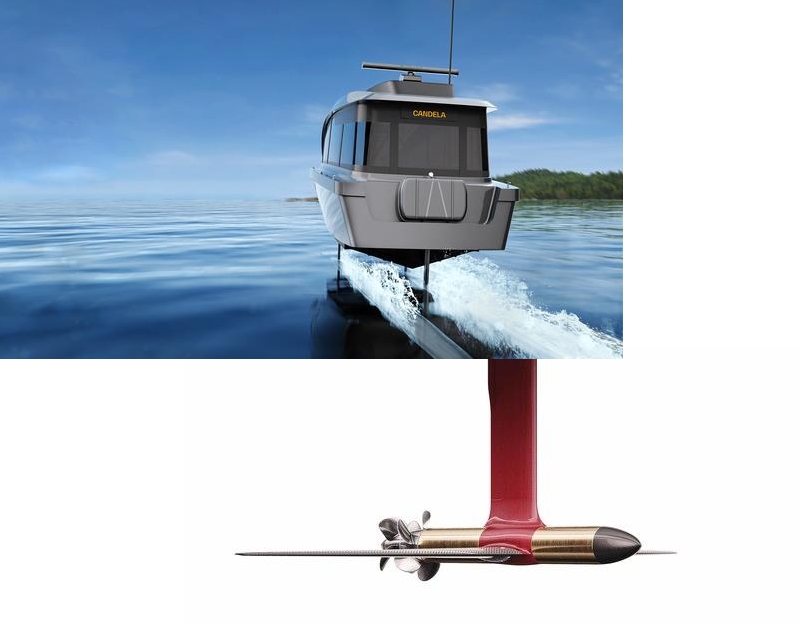 All this is set to change with the revolutionary Candela C-POD, an electric pod drive developed by Europe’s leading electric boat manufacturer, the Stockholm-based tech firm Candela.

What would be the best boat propulsion one could imagine? Here are some ideas: electric, completely silent, without oil changes and with an almost unlimited lifetime. Add to that almost no losses – converting most of the energy to thrust, says Gustav Hasselskog, Candela’s Founder and CEO.

In other boat motors, be it electric or fossil fuel, the motor is typically situated in a box above the waterline, transferring thrust to the propeller through a complicated set of shafts, bearings and gears. The Candela C-POD gets rid of the gears altogether. Two ultra-compact yet very powerful electric motors are mounted under the water in a torpedo-like socket, directly driving the propellers. Each motor is coupled directly to a propeller, which minimizes friction losses. Contra rotating propellers add the benefit of very high propeller efficiency.

“The engineering challenge was to make the electric motors compact enough. Being submerged, they have to have a very small diameter in order to cause minimal drag, ” explains Hasselskog.

To accomplish this, Candela’s engineers had to rethink electric motor design bottom-up. Electric motor volume is not driven by power. Instead, it is largely proportional to torque. And power is torque times rpm. For the Candela C-POD motors, Candela opted to increase the rpm and lower the torque to boost the Candela C-POD’s power density. The best way was to split the thrust needed on two propellers. The reason is that the maximum rpm is limited by the speed of the propeller tip moving through water. At around 45 m/s propeller speed, the pressure in the flow around the propeller reaches vacuum and starts to boil. That creates noise, damage and inefficiencies. The speed of the tip of the propeller is a product of rpm and propeller diameter. So splitting load on two propellers allows for propellers with smaller diameter and thereby higher rpm – and in turn smaller motors. 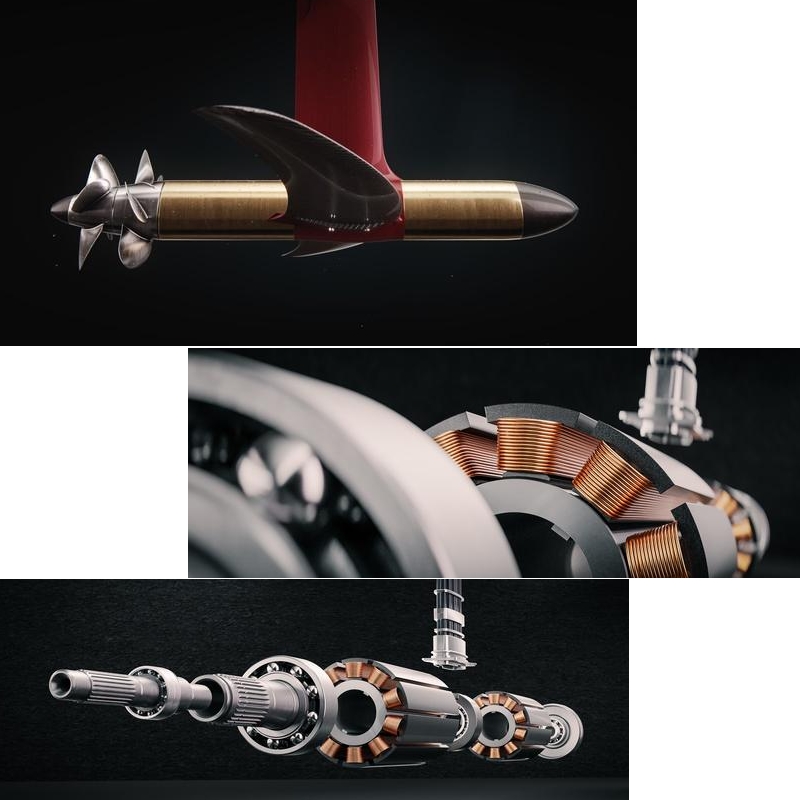 By placing the motors under the water, Candela also elegantly solved the problem all electric motors face: heat. The Candela C-POD engineers designed the slim pod drive to be directly and efficiently cooled by the flow of seawater, thereby enabling higher operating temperatures and extracting more power from the motors.

“The first obstacle towards a very small high-power motor is heat. You can take any motor and give it three times more electricity than it is rated for. It will work. But only for a few seconds. Then it melts. With Candela C-POD, we have almost unlimited cooling power – we just need to get heat from the coils to the surrounding water flow,” says Hasselskog.

An added benefit is silence.

Gasoline outboards are some of the noisiest machines out there. Decibel levels climb into the 90s as they near wide-open throttle; some noisy boats hit 100 decibels – loud enough to damage the human ear. Even conventional electric outboards are not as quiet as they could be, since the gears emit a whining sound at high speeds.

“Candela C-POD has no gears and is therefore totally quiet. No rattling, no squeaking, absolutely no noise, even at 30 knots,” says Hasselskog.

Boat owners are used to paying big bucks for maintenance. Diesel and gasoline engines require annual oil and filter changes, as well as winterization. And commercial boat operators typically have to swap their outboards every two years since gear houses are not designed for more than thousand hours.

Freed from gears and with very few moving parts, the Candela C-POD will last several thousand hours – without any maintenance whatsoever.

“For the average leisure boat user, this means you can just use the motor and forget about the usual hassle with service and winterization. The Candela C-POD will outlast you and probably your kids as well,” says Hasselskog.

The Candela C-POD was born from the unique requirements Candela place on electric drive trains. The company’s electric hydrofoil craft fly above the water on foils and consume 80% less power than traditional powerboats. Making a more efficient motor directly translates to huge gains in range. 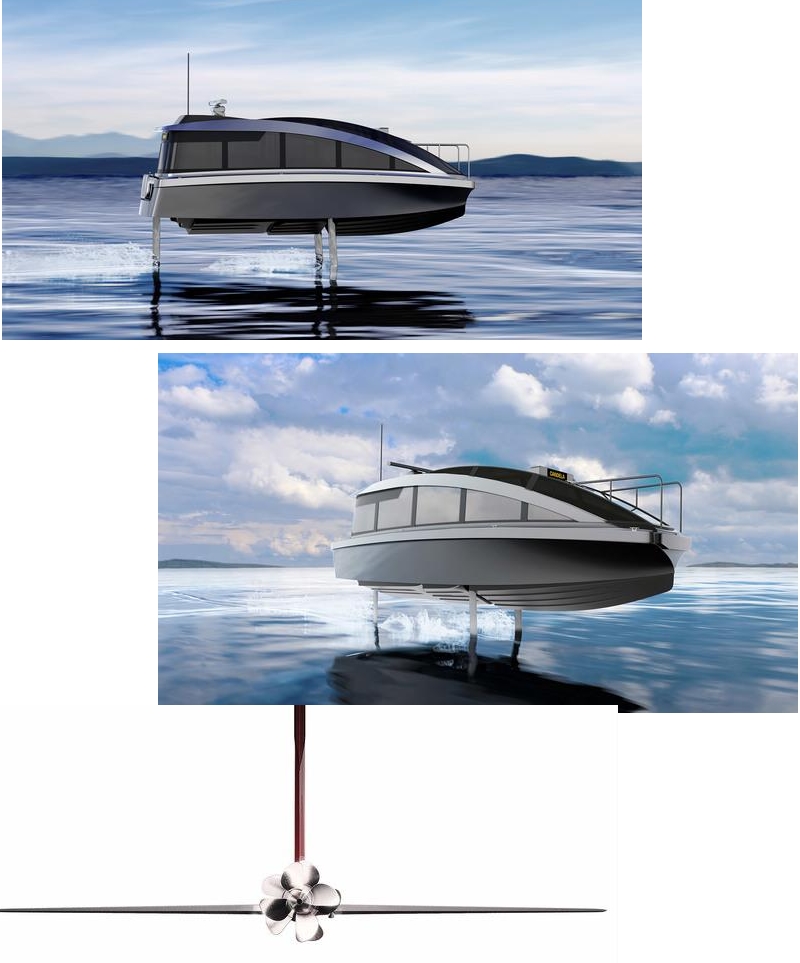 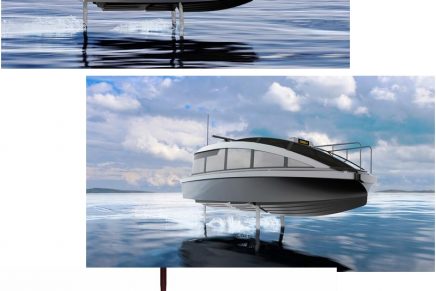 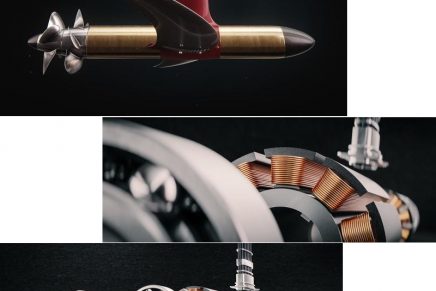 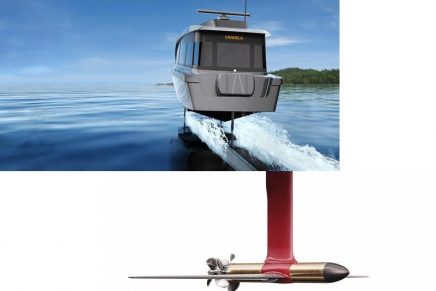