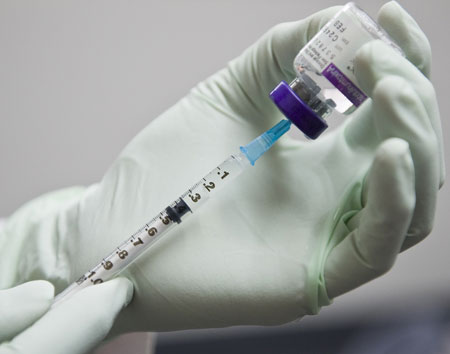 BOTOX Cosmetic (onabotulinumtoxinA) Celebrates 10-Year Anniversary of U.S. Food and Drug Administration Approval. BOTOX Cosmetic is a prescription medicine that is injected into muscles and used to improve the look of moderate to severe frown lines between the eyebrows (glabellar lines) in people 18 to 65 years of age for a short period of time (temporary).

“When approved by the FDA in 2002, BOTOX Cosmetic changed the way that physicians could treat patients who were interested in improving the appearance of their vertical frown lines between the brows,” said David E.I. Pyott, Chairman of the Board, President and CEO, Allergan, Inc.

“BOTOX Cosmetic has become the number-one neuromodulator in the United States and the number of patients considering talking to their doctor about treatment has more than quadrupled to 5.8 million since 2002.”

BOTOX secured its first FDA approval more than 22 years ago as a treatment for two rare eye muscle disorders, making it the first product of its kind approved in the world. In 2002, the same formulation with dosing specific to frown lines was approved under the name BOTOX Cosmetic.

“The FDA approval of BOTOX Cosmetic enhanced the practice of plastic surgery by providing plastic surgeons with a new treatment option for patients seeking to reduce the appearance of vertical frown lines between the eyebrows,” said Malcolm Z. Roth, MD, president of the American Society of Plastic Surgeons.

BOTOX is a prescription-only medical product that contains tiny amounts of highly purified botulinum toxin protein refined from the bacterium, Clostridium botulinum. BOTOX has a unique, protected molecular structure that stabilizes the core toxin in BOTOX from degradation. When injected at FDA-approved and labeled doses into a specific muscle or gland, BOTOX® is expected to diffuse locally and produce a safe and effective result by producing a localized and temporary reduction in the overacting muscle or gland, usually lasting up to approximately three to ten months depending on the indication and on the individual patient.

BOTOX was first approved by the FDA more than 22 years ago for the treatment of strabismus and blepharospasm, two eye muscle disorders, making it the first botulinum toxin type A product approved in the world. Since its first approval in 1989, BOTOX has been recognized by regulatory authorities worldwide as an effective treatment for 25 different indications in approximately 85 countries, benefiting millions of patients worldwide.

In the United States, BOTOX is also approved to treat seven medical conditions, including the abnormal head position and neck pain that happens with cervical dystonia (CD) in adults; symptoms of severe underarm sweating (severe primary axillary hyperhidrosis) when medicines used on the skin (topical) do not work well enough; for the treatment of increased muscle stiffness in elbow, wrist, and finger muscles in adult patients with upper limb spasticity; for the prophylactic treatment of headaches in adults with Chronic Migraine, a distinct and severe neurological disorder characterized by patients who have a history of migraine and suffer from headaches on 15 or more days per month with headaches lasting four hours a day or longer; and most recently, for the treatment of urinary incontinence due to detrusor overactivity associated with a neurologic condition (e.g. spinal cord injury (SCI), multiple sclerosis (MS)) in adults who have an inadequate response to or are intolerant of an anticholinergic medication.

In addition to its therapeutic uses, the same formulation of BOTOX with dosing specific to moderate to severe glabellar lines was approved by the FDA in 2002 under the trade name BOTOX Cosmetic (onabotulinumtoxinA). BOTOX Cosmetic is indicated for the temporary improvement in the appearance of moderate to severe glabellar lines (frown lines between the eyebrows) associated with corrugator and/or procerus muscle activity in adult patients up to 65 years of age.