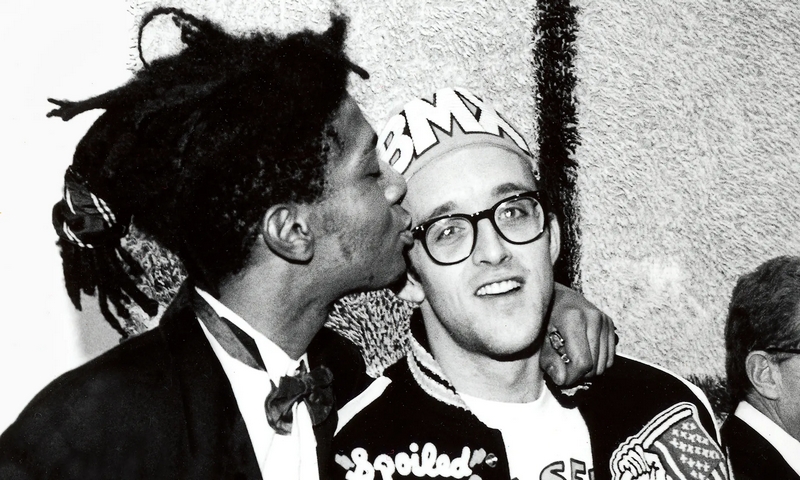 Jean-Michel Basquiat and Keith Haring in 1987. More than 300 artworks by the friends are to go on show at Melbourne’s NGV. Photograph: George Hirose/NGV

This article titled “Basquiat and Haring paintings to go on show in blockbuster NGV exhibition” was written by Stephanie Convery, for theguardian.com on Wednesday 17th April 2019 03.00 UTC

One of the most expensive US paintings ever sold, Jean-Michel Basquiat’s Untitled (1982), will headline the exhibition season at the National Gallery of Victoria this summer.

Related: Is this Basquiat worth $110m? Yes – his art of American violence is priceless

Basquiat’s famous “skull painting”, which sold for US$110.5m in 2017, will feature in a double exhibition exclusive to Melbourne, pairing Basquiat’s work with that of his contemporary, collaborator and friend, the US pop artist and activist Keith Haring.

Keith Haring/Jean-Michel Basquiat: Crossing Lines will feature more than 300 artworks by the two quintessentially 1980s artists, including works on paper, paintings, sculpture, objects and pieces designed to be shown in public spaces.

Untitled (1982) is nearly two metres tall and depicts a skull in Basquiat’s distinctive sketchy, layered and colourful style. It “bleeds history”, according to the Guardian art critic Jonathan Jones. It is widely seen as an extremely affecting work, warranting a solo show in Brooklyn in 2018.

Haring’s works on show will include his own Untitled (1983) – a meditation on media and computer technology – his famous tarp paintings and his tribute to Basquiat after the latter’s death in 1988, A Pile of Crowns for Jean-Michel Basquiat.

The art historian and NGV guest curator Dieter Buchhart said the exhibition would draw out both artists’ “passionate engagement” with issues including racism and the Aids crisis, social injustice and consumer capitalism.

The US artist KAWS, AKA Brian Donnelly, will also feature at the NGV next summer, in the new exhibition Companionship in the Age of Loneliness.

Female artists, fashion and a strong focus on photography will make up the gallery’s free offerings from September, including an exhibition of the work more than 100 local and international photographers exploring ideas about urban environment; and Bleached Gothic, the first major survey of works by the Australian artist Petrina Hicks, who is known for highly distinctive, disquieting and hyperreal photographs of children and young women.