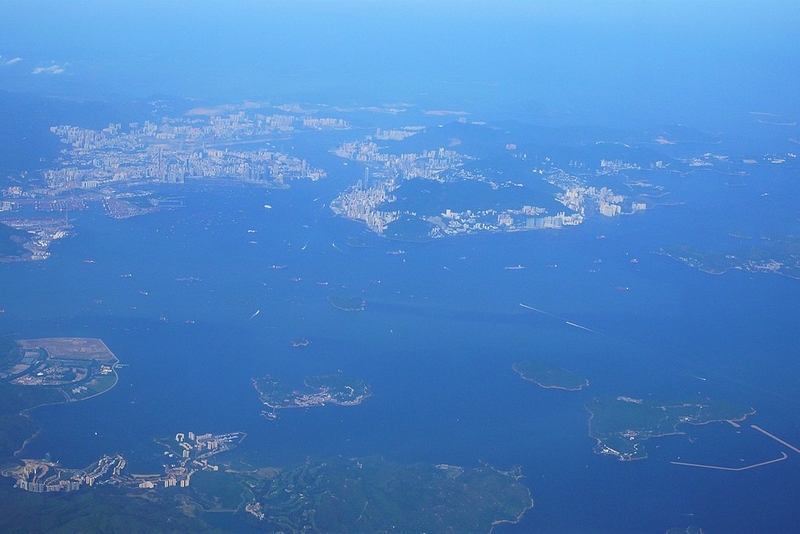 This article titled “Are artificial islands the answer to Hong Kong’s housing crisis?” was written by Matthew Keegan in Hong Kong, for theguardian.com on Friday 12th July 2019 05.00 UTC

“Reclamation is unavoidable,” Hong Kong’s leader, Carrie Lam, told journalists in a Q&A session on land supply last year. “In the long term, many developing cities have to adopt this choice.”

Hong Kong suffers from chronic overcrowding and housing shortages – a situation made worse by the 150 residence permits a day that have been issued to mainland Chinese citizens since 1997. Additionally, 62% of land is “locked up” or “semi-locked up” by law or regulatory constraints due to environmental reasons in terms of land development, according to the thinktank Our Hong Kong Foundation.

“It is crucial that we look for a new source of land supply by building new towns with newly created lands,” says Stephen Wong, the thinktank’s deputy executive director.

The city, which has been the scene of mass protests and clashes against the government’s controversial extradition bill, is pushing ahead with plans to build one of the world’s largest manmade islands. Called Lantau Tomorrow Vision, the project will cost upwards of HK$624bn (£60bn) and involve reclaiming 1,700 hectares (4,200 acres) of land out at sea to house up to 1.1 million people on artificial islands.

Reclamation work is scheduled to begin in 2025, with the first residents moving in by 2032. The initial phase consists of creating 1,000 hectares of land around the island of Kau Yi Chau in the central waterway east of Lantau – the city’s biggest outlying island.

A further 700-hectare reclamation will follow in a second phase. Once completed, the reclaimed land will house 700,000 to 1.1 million people in up to 400,000 homes. Seventy per cent will be public housing and 30% private. It will also be home to Hong Kong’s third central business district and a cross-sea transport network.

Hong Kong’s land shortage has fuelled property prices, leaving the city burdened with the world’s most unaffordable property market. The average household needs to spend 19 years’ worth of income to purchase an apartment.

Meanwhile, population density has reached 27,400 persons per square km of developed land, even outranking Mumbai even for overcrowding. More than 200,000 people live in sub-divided flats in Hong Kong, including 20-sq-foot “coffin homes”. The average waiting time for public housing has risen to 5.5 years, an 18-year peak. In the five years to 2017 alone, the cumulative shortfall of Hong Kong’s public and private housing supply reached 99,000 units.

“The housing crisis has deepened and the worst is yet to come,” says Wong. In the next 30 years, Our Hong Kong Foundation predicts the city will need an additional 9,000 hectares of land to increase per capita living space, reduce population density and provide enough land for the essential supporting facilities.

Hong Kong is no stranger to reclamation. Approximately 6% of the city’s land is reclaimed and is home to 27% of its population. Since the 1970s, Hong Kong has built nine towns including Shatin, Tuen Mun and Tseung Kwan O. Most involved substantial reclamation.

It’s not just Hong Kong. Increasingly, artificial islands are being floated as solutions to some of the pressing challenges that cities face around overcrowding and rising land prices. Singapore has used reclamation to expand its land mass by 25%, helping it stay more competitive than Hong Kong in terms of commercial and residential property prices. Meanwhile, Dubai’s Palm Islands were built to increase the amount of premium waterfront land available, elevating the city’s tourism economy to attract luxury hotels and resorts, and the very wealthy.

‘Pouring money into the sea’

Critics claim building artificial islands is “pouring money into the sea” and will wipe out the city’s fiscal reserves. Several major infrastructure projects have suffered delays and budget overruns in recent years, which has diminished public confidence.

Then there’s the environmental damage. “The project will cause permanent loss of habitat and change of hydrology, and have a significant negative impact on marine ecology and the livelihoods of Hong Kong fishermen,” says Angel Lam, senior conservation officer at WWF-Hong Kong.

Environmentalists such as Angel Lam are urging the government to adopt a “brownfield first” policy instead. This would involve developing more than 1,000 hectares of existing brownfield land in the city’s New Territories area.

“Why does the government have to do all the destructive reclamation to create 1,000 hectares of land when there is already a 1,000 hectares of land waiting in the New Territories,” says Greenpeace senior campaigner Andy Chu Kong. “The issue is that we are not lacking land in Hong Kong, we are lacking the lack of government’s proper planning on the existing land that we already have.”

Tom Yam, a member of the Citizen Task Force on Land Resources, questions the conceptual viability of building artificial islands, given the climate emergency and rising sea levels. “No other government plans a city with up to one million people in the middle of the sea when other countries are taking steps to anticipate rising sea levels,” says Yam. “Why build a city in harm’s way? This is a high-risk project.”

Yam also points out that the proposed artificial islands, with a 15- to 20-year construction timeframe, cannot mitigate the near-term housing crisis. He also casts doubt on the project’s ability to ease overcrowding. “Having up to 700,000 people living on 1,000 hectare of land leads to a population density of 70,000 per sq kilometre,” says Yam. “This is more than the most congested district in Hong Kong which is Kwun Tong with 57,000 people per sq km.”

Overall, Yam believes the only beneficiaries of the new islands will be engineering firms. “Construction and engineering companies, now mostly from China, will see the most immediate benefits from Lantau Tomorrow, not the mass of Hong Kong people, who will pay for it with the bulk of their fiscal reserves,” he says.