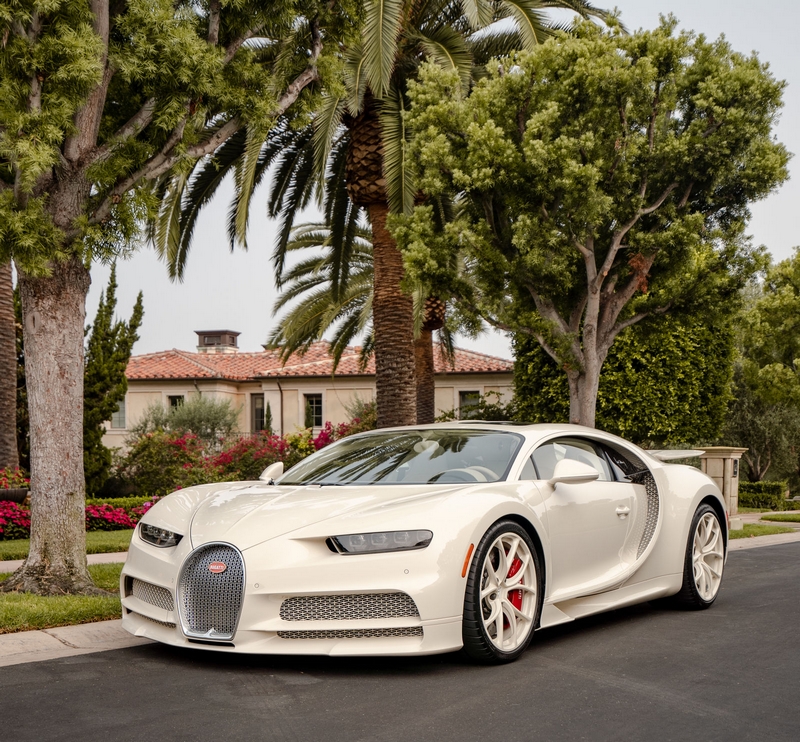 Bugatti follows into the footsteps of Rolls-Royce and co-creates a new model with French luxury Maison Hermès.

Another masterpiece by Bugatti is delivering great joy to its owner, California based investor Manny Khoshbin: the ‘CHIRON habillé par Hermès’. Hermès leaves its mark on the hyper sports car with intricate and special application of colors, fabrics and finishes.

The hyper sports car is individual in almost every single aspect.

It was Manny Khoshbin’s vision to bring the two legendary luxury French brands together again and create something very unique for him.

“I am a true Bugatti aficionado – I wanted to name my son ‘Ettore’ but my wife disagreed. When I saw the Chiron for the first time in 2015, I was one of the first customers in the world to reserve a build slot, yet one of the later to take delivery of one, but the reason for that was down to me.” It was Khoshbin’s vision and his devotion to the Bugatti marque to inspire others by defying the limits of custom automotive design. “I like this Chiron the most out of them all, I drive it almost every day. It’s a real driver’s car, I still get excited every time I get into the driver’s seat. One day I will hand it down to my son, it will live for generations”,  – Manny Khoshbin. 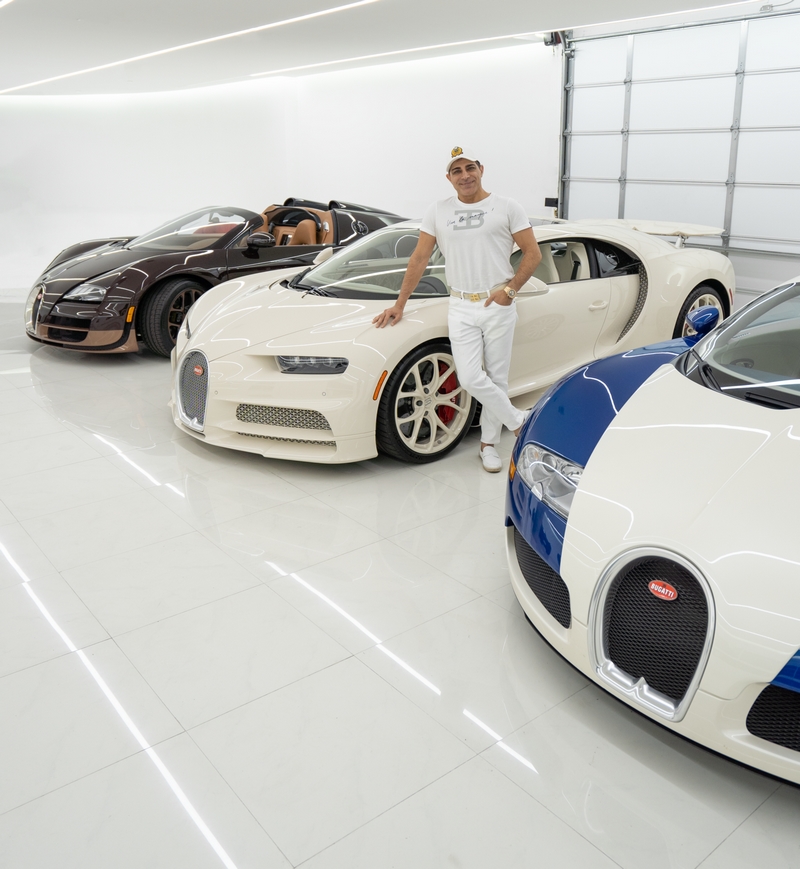 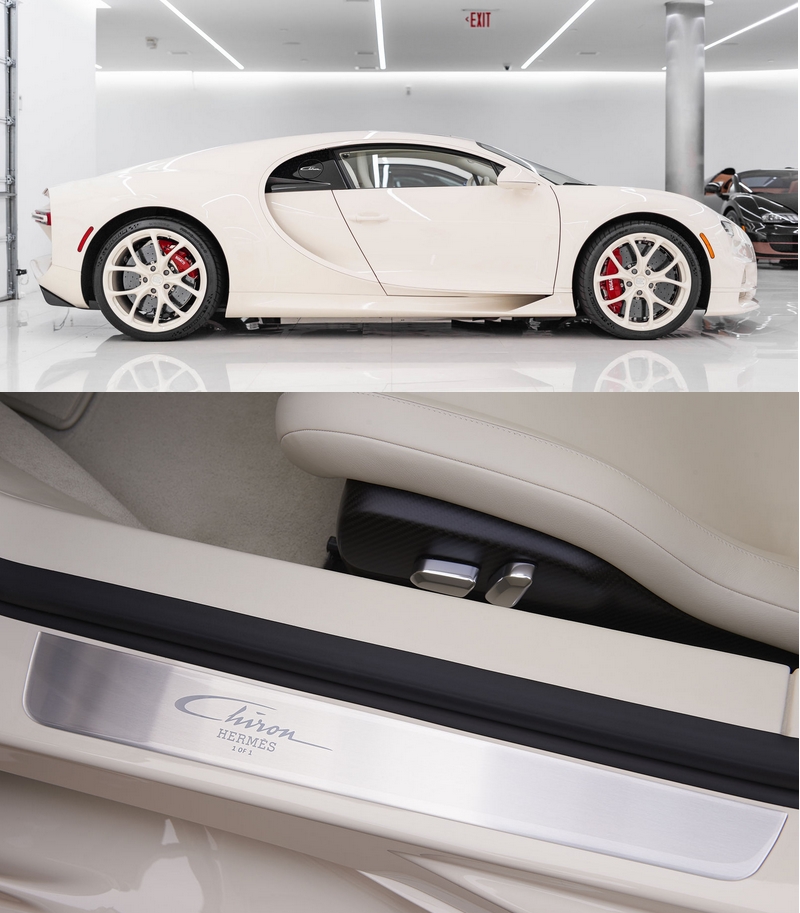 The overall color scheme of this extraordinary Bugatti Chiron, which is adorned in the distinguishable leather shade of ‘Craie’ made famous by the legendary handbags and other luxury goods to come from Hermès. The off-white,
chalk-derived hue envelopes the complete outside of this Chiron; making for one exterior color, when most Bugatti
Chiron models consist of two main colors for contrast.

Further to the main exterior color, the rear bumper, all mesh covers, trim parts and Bugatti ‘Classique’ alloy wheels are all finished in ‘Craie’. There are also a number of unique design traits on the exterior of the ‘Chiron habillé par Hermès’ by Bugatti, with the horseshoe grille on the front customized with the Parisian brand’s signature ‘H’ monogram, while its classic ‘Courbettes’ motif, graces the underside of the rear wing. The ‘Courbettes’ design features sketches of rearing horses and was especially chosen by Khoshbin to emphasize the immense power output of 1,500 PS in the Chiron. 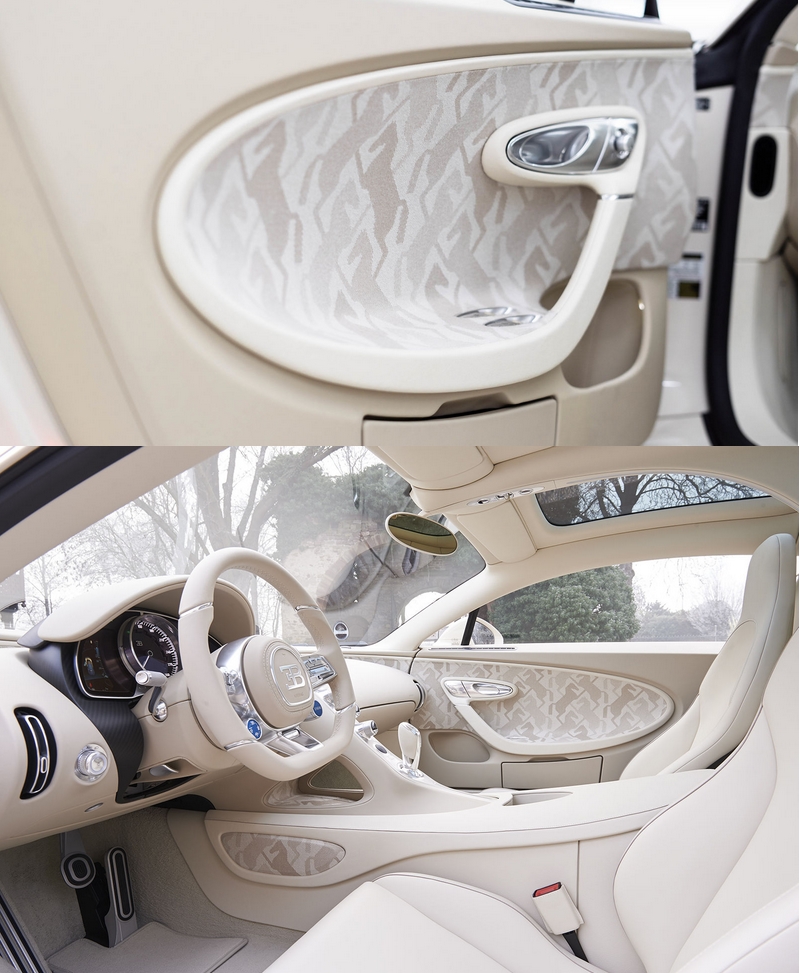 Almost all material used for the interior is crafted by Hermès, with the ‘Craie’ share representing leather of the seats, middle console, inner signature line, roof and rear panel plus the doors’ clasps.

The use of an original Hermès material, adorned by the ‘Courbettes’ design is reflected inside the Chiron, too – on the middle console plate, the centre console tray and door cards.

From the point that Khoshbin reserved a build slot for his Bugatti Chiron, through to the delivery of the one-of-a-kind hyper sports car, the customer was fully involved in the order process. That was, at his own election – Mr. Khoshbin is, after all, a true Bugatti enthusiast and collector.

He adds: “The order of this special Chiron involved two visits to Hermès in Paris to discuss design, the realization of the interior and see progress being made. Between myself, the team at Hermès and designers at Bugatti, we exchanged hundreds of emails. I took my time to draft the car and that was very much a conscious decision – this is a car that I will one day hand down to my son, it will live for
generations”.

“I’m truly thankful to the teams at Bugatti and Hermès for making this happen. I came to Bugatti with the idea, and it’s not something that they’d usually do but they were open to the notion of making something special. Now I have three Bugatti models in my collection, and there is soon to be a fourth. There’s this one, and two Veyrons, one a Grand Sport Vitesse “Les Légendes de Bugatti” Rembrandt Bugatti, that I love just to look at, they are so beautiful.” The Rembrandt Bugatti is one out of three Vitesse in this unique configuration with extremely rare exposed brown carbon fibre finish. “Then we’re about to take delivery of a Bugatti Baby II for my son,” Mr. Khoshbin continues, “he is Bugatti mad, and gets excited every time he hears the name! I like the ‘Chiron habillé par Hermès’ the most out of them all – I drive it almost every day. It’s a real driver’s car and I still get excited every time I get into the driver’s seat.”

It is not the first time the two French luxury houses teamed up. Before WWI Ettore Bugatti commissioned saddles
and leather tack from Émile-Maurice Hermès, grandson of founder Thierry Hermès. In the 1920s Hermès leather
appeared in Bugatti’s racing cars and in 2008 BUGATTI paid tribute to the enduring relationship with the ‘Bugatti
Veyron Fbg par Hermès’. 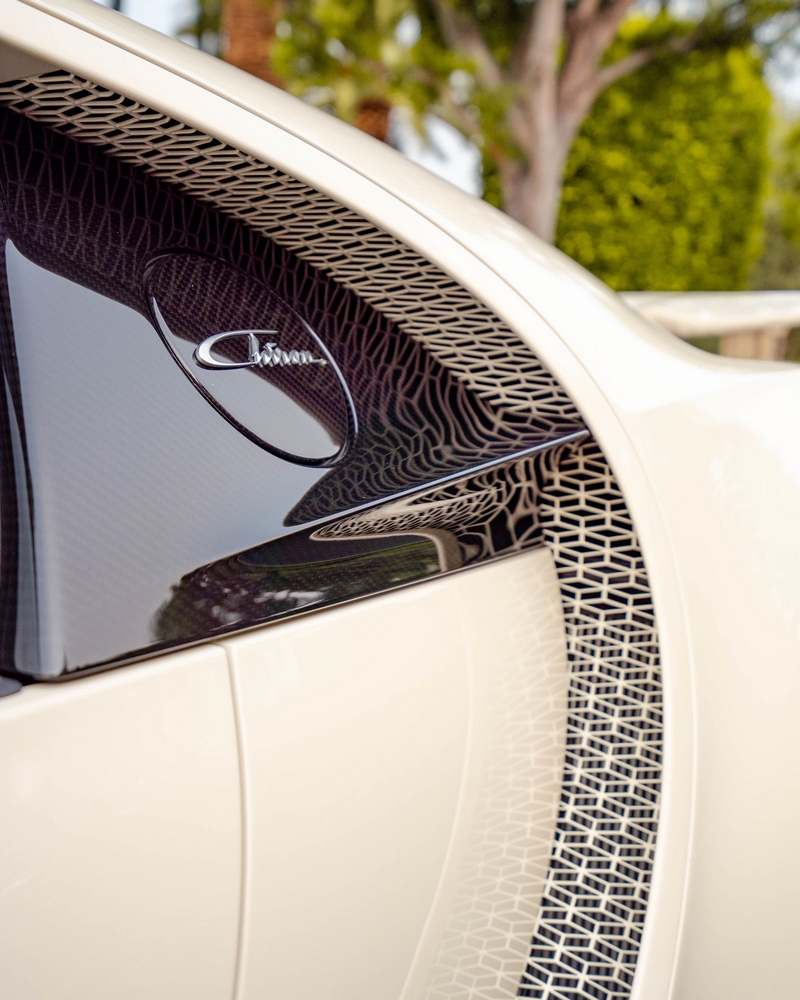 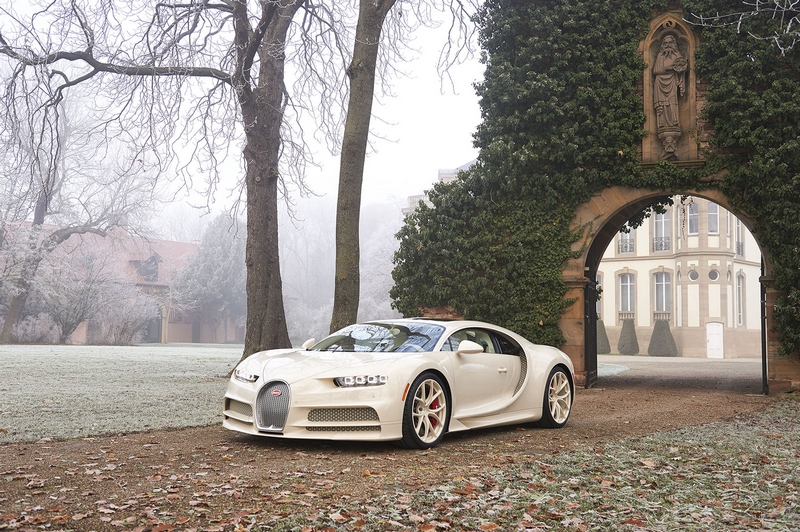 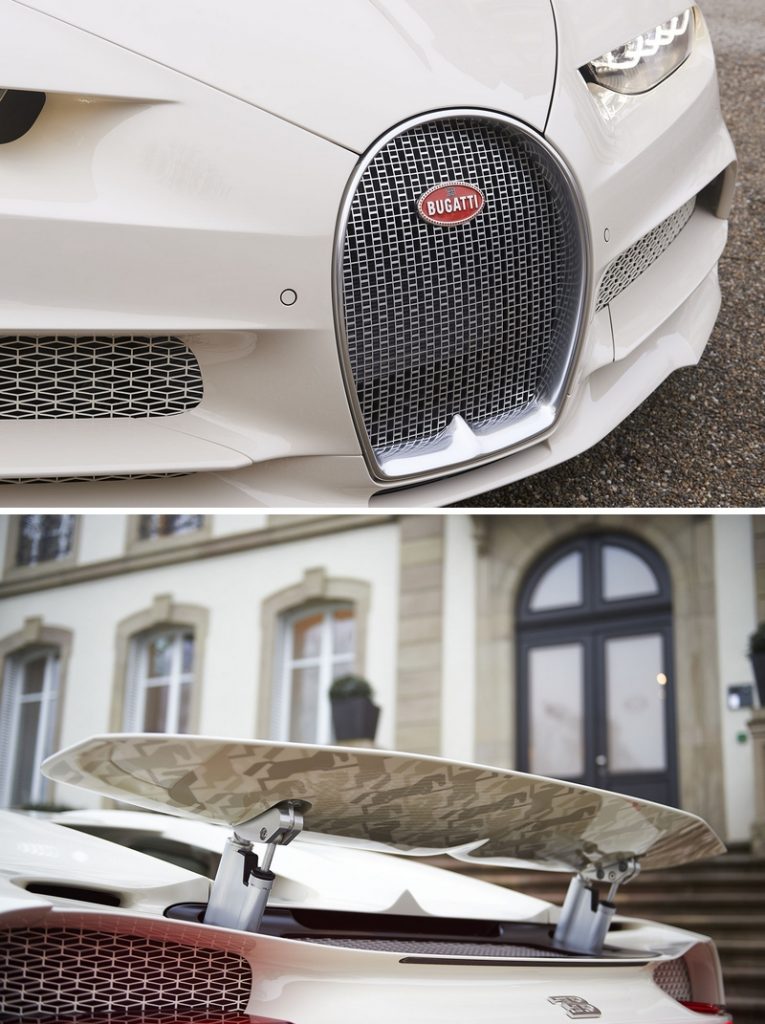 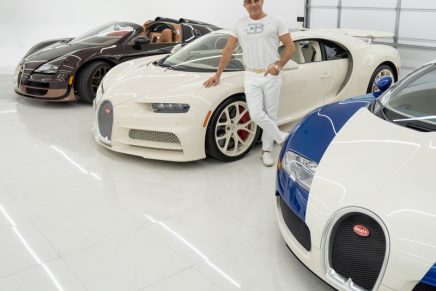 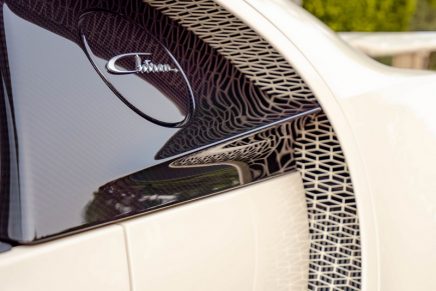 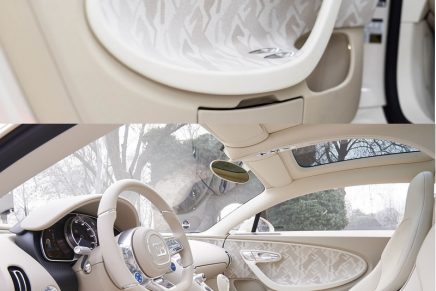 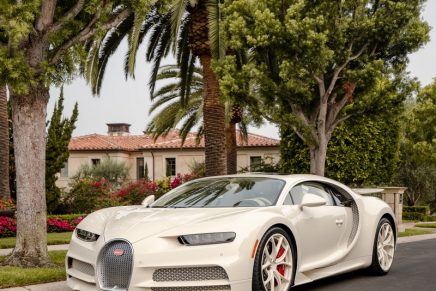 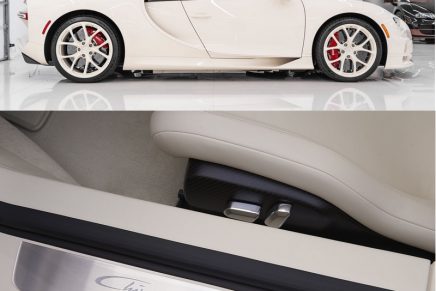 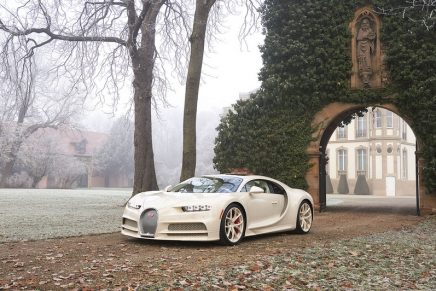 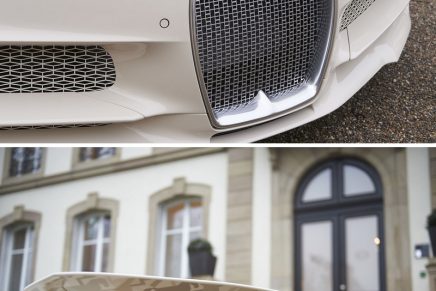