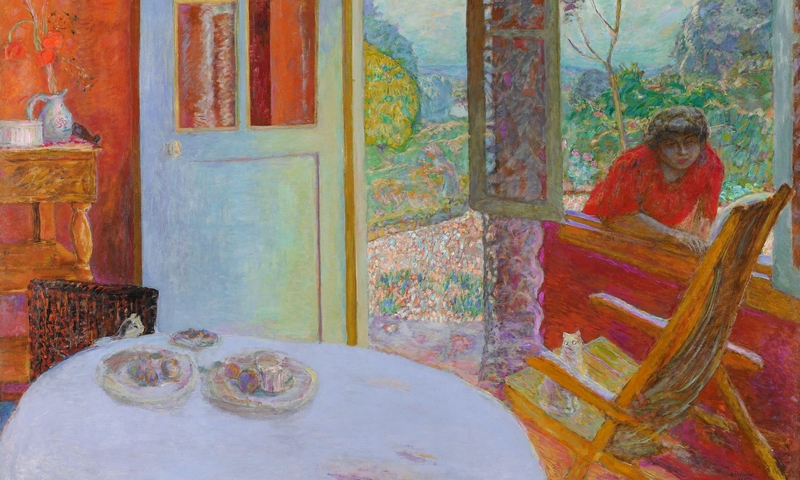 A detail from Pierre Bonnard’s Dining Room in the Country (1913). Photograph: Tate Modern

This article titled “Why taking it slow in an art gallery could change your life” was written by Jenny Stevens, for The Guardian on Tuesday 24th July 2018 16.07 UTC

I was about nine years old, sitting cross-legged on the wooden floor of Brighton art gallery in the middle of a heatwave. It smelled old, like my nan’s house, and the painting positioned in front of me and my class felt as though it was the biggest thing I had ever seen.

David Hockney’s Mr and Mrs Clarke and Percy was on loan to the gallery and we had all been bundled out of junior school to take a look at it. We yawned and scratched and picked the scabs on our knees – like kids do when they are hot and bored – but then the gallery assistant asked us to look. She told us about Hockney and how he painted his friends in their house in London. She said that Celia Birtwell, the woman in the painting, was a fabric designer and that Ossie Clarke was a fashion designer. Birtwell was pregnant at the time, she said, which is symbolised by the lilies. Clarke was a naughty character, which is why he has a cat on his lap.

I would never have looked for so long unless someone had encouraged me to do so. When I did, I fell in love in a way from which I would never recover. I, a scabby-kneed kid from a council estate, went on to university and even learned to paint.

So, Tate Modern’s “slow looking” sessions, for its forthcoming Pierre Bonnard exhibition, feel exhilarating. I often see people in galleries reading all the labels, going from work to work like they are on an airport treadmill. And good for them. But what if we invite people to really look?

I did not come from a family where people talked about art. Before that day in front of the Hockney, I had never seen a real painting; that was what posh people did. But, on that school trip, that changed. Every time I looked at the painting I could see more: the open window, like a chasm between them; the way Clarke’s foot disappears into the shagpile rug. Does anyone even know she is pregnant?

I still look at Hockney’s painting in the Tate Modern from time to time and I always feel something different. I learned later that Clarke was naughty indeed – perhaps having an affair with another man, possibly Hockney himself. I wonder if Birtwell knew. Sometimes, her face seems as though it does.