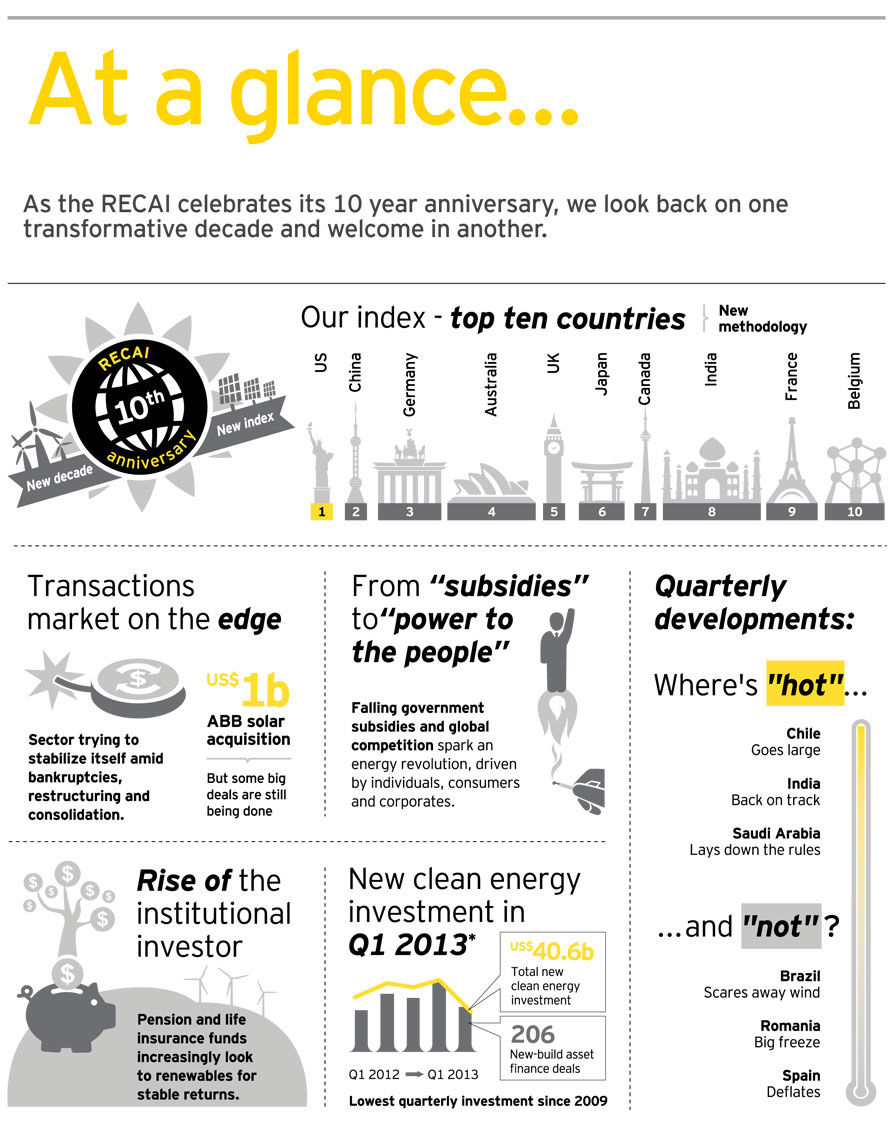 A new era is dawning in the renewable energy industry. Energy demand, natural resource, technology costs, access to finance and global competitiveness are identified as the key influences for investors, according to the 10th anniversary edition of the Renewable Energy Country Attractiveness Index (RECAI), released by Ernst & Young today.Global annual clean energy investment totaled US$269b in 2012, representing a five-fold increase on 2004. The sector now competes for investment with more traditional energy sources, and new technologies — such as solar panels, biomass boilers and mini wind turbines — are enabling energy users to run their own small power plants – changing the way businesses and consumers think about energy.

“The renewable energy landscape today is truly global. From Japan and Southeast Asia to Africa and South America, renewable energy is a viable energy source that is gaining a solid and growing share in the energy mix,” said Gil Forer, Ernst & Young’s Global Cleantech leader. “But, the renewables industry is facing growing pains. Not only is the future a place with less government support, but industry players also have to fight for market share across all corners of the globe and with some worrying signs of trade barriers emerging. For an industry that is still relatively new, this is a seriously challenging time, leaders need to be conversant in international business, conscious of global politics, and clever in innovating new business models and business relationships to win in an increasingly global competitive world.” 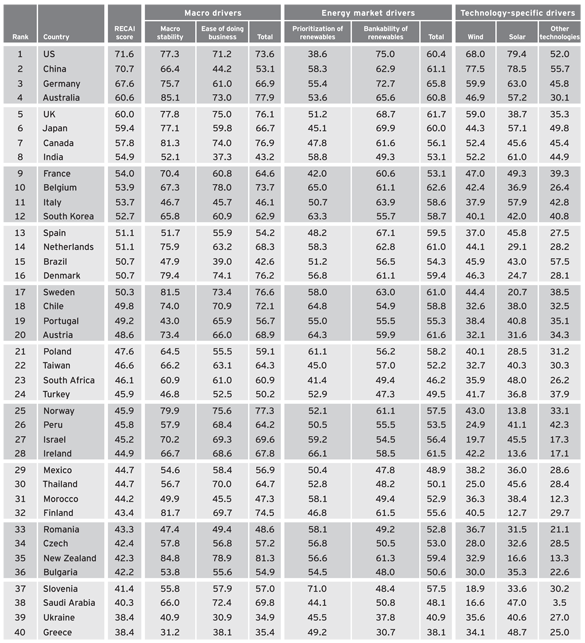 The latest RECAI index includes a revised methodology to reflect these shifts in investment drivers and the maturing of the sector since the report’s creation 10 years ago. The key changes to the methodology applied to each market include: an increased focus on the role renewable energy plays in each country’s energy mix, energy supply and demand, the cost competitiveness of renewable energy, the importance of decarbonization and an increased emphasis on the economic and political stability of each particular market.

“Market fundamentals, such as energy demand growth, security of energy supply and the affordability of renewable energy (relative to other sources), feature as some of the most prominent drivers of renewable energy growth today,” said Ben Warren, Ernst & Young UK Environmental Finance Leader and Global Cleantech Transactions leader. “Our revised methodology allows us to analyze each market’s investment attractiveness much more effectively by considering these factors and weighting them accordingly.”
The index sees the US regain the top spot, as high barriers to entry for external investors realign China into second place. However, growth prospects for the sector in China remain strong with continued GDP growth, increasing energy demand, and the ongoing strategic importance of the sector to the local economy providing solid foundations for the future.

South America continues to grow in prominence, thanks in part to its growing energy demand. Chile’s project pipeline includes 300MW-400MW concentrated solar power (CSP) plants, while Peru has entered the index for the first time due to good resources and a strong investment climate. However, new policy measures and tender cancelations in Brazil are likely to temper the rapid growth seen in the region over the last 18 months.

High levels of project activity and investment interest in Japan and Australia give the Asia Pacific region a stronger presence at the top of the index. Thailand also joins the index in this issue, boasting strong solar resource and a healthy project pipeline, as well as stable fiscal and regulatory support measures.

In Europe, Romania became the latest to slash its subsidies, reinforcing the relatively somber mood in Eastern Europe as policy makers try to find the balance between growth and sustainability.

A number of the Middle East and North Africa countries, including Egypt, Tunisia and the UAE, have fallen out of the top 40 due to a slow recovery from the Arab Spring and an absence of clear policy frameworks delaying capacity deployment.