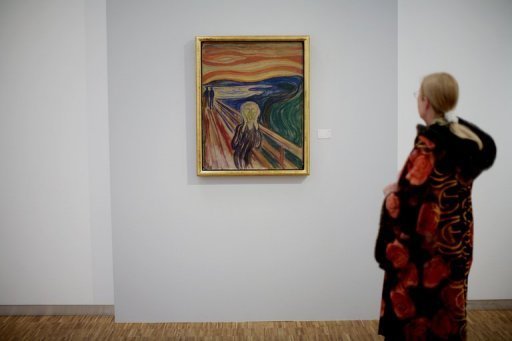 A version of “The Scream,” one of the world’s most famous paintings and an iconic image of despair, will go on sale this May in New York, where it is expected to fetch at least $80 million, Sotheby’s auctioneers said to AFP.

Edvard Munch’s “The Scream”, one of the most instantly recognizable images in both art history and popular culture, perhaps second only to the ‘Mona Lisa, will go on sale this May in New York, where it is expected to fetch at least $80 million, Sotheby’s auctioneers said to AFP.

The painting is owned by Norwegian businessman Petter Olsen, whose father was a friend and patron of “Scream” painter Edvard Munch.

Dating from 1895, “The Scream” offered by Sotheby’s was done in pastel and is the only one in which one of the two figures in the background turns to look outward. The work will be exhibited at Sotheby’s in London on April 13 and in New York starting April 27 ahead of the sale.

“Instantly recognizable, this is one of very few images which transcends art history and reaches a global consciousness. ‘The Scream’ arguably embodies even greater power today than when it was conceived,” Simon Shaw, head of Sotheby’s Impressionist and Modern Art department in New York said in a statement.