A perpetual calendar complication allows watch aficionados to track the date, day of the week, month, year, leap year, and sometimes even more. Being one of the most practical of complications, a perpetual calendar is an intricate mechanism very praised in Haute Horlogerie. Discover the complex and exceptionally ingenious movements. 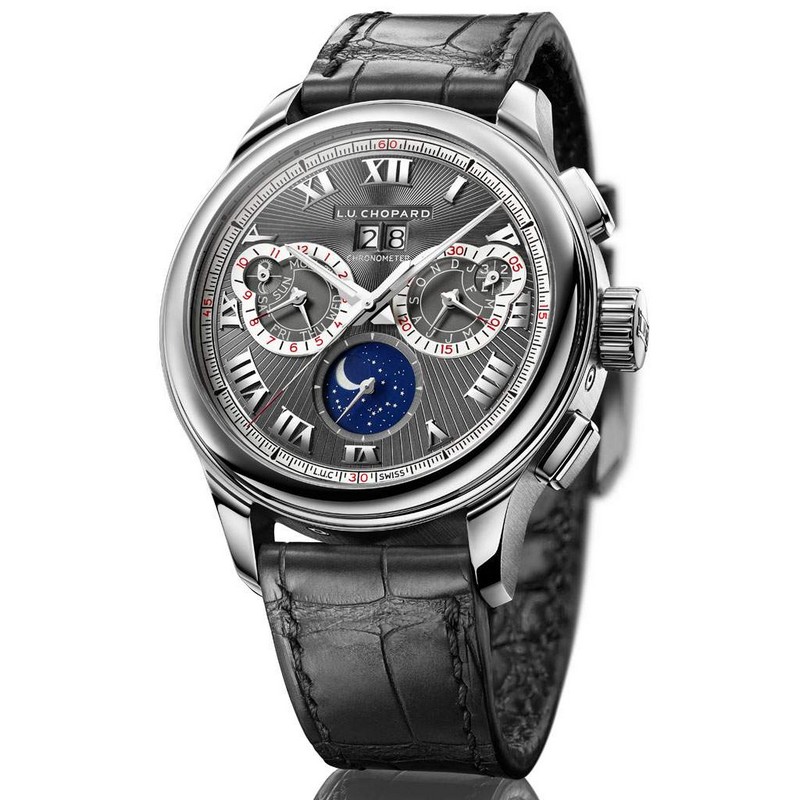 CHOPARD L.U.C PERPETUAL CHRONO watch
The perpetual calendar chronograph is a complication in a league of its own: it combines two time frames: the longer scale of a calendar that will provide its accurate indications for centuries, and the shorter one of specific timing operations.

Issued in two series of 20 pieces in “Fairmined” 18-carat white gold and in “Fairmined” 18-carat rose gold, it is intended for watchmaking connoisseurs and devotees of exceptional objects. The new L.U.C Perpetual Chrono from Chopard combines a hand-wound chronograph and a finely crafted perpetual calendar within an unprecedented L.U.C movement, Calibre 3.10-L. The L.U.C Perpetual Chrono flaunts one of the most sophisticated styles and constructions in the world of Haute Horlogerie, while meeting the highest technical ethical and aesthetic standards.

This calendar is recognisable by its large twin-aperture date display, complemented by indications of the day and whether or not it is a leap year, while the finishing touches are set by a day/night indication and an orbital moon-phase display. The latter guarantees graphic and accurate readings of the age of the moon, with a mere one-day deviation in 122 years. Since the original configuration of this calendar uses the same areas as the chronograph – both involving indications at 3 and 9 o’clock – the architecture of the perpetual calendar had to be adjusted to offset the day/night indicator by a few millimetres. This arrangement determined the specific layout of the dial and its counters. 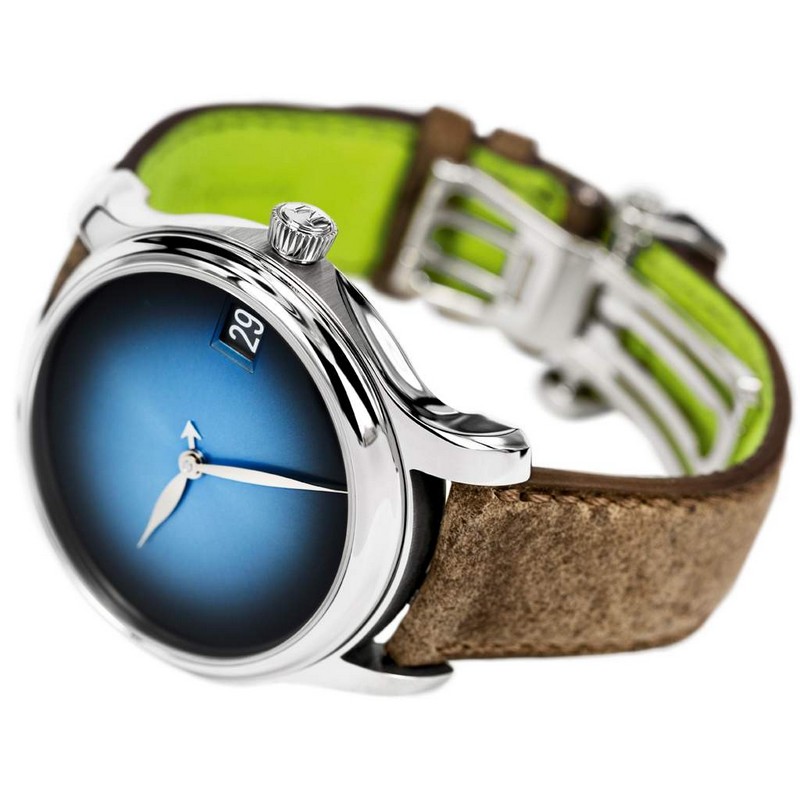 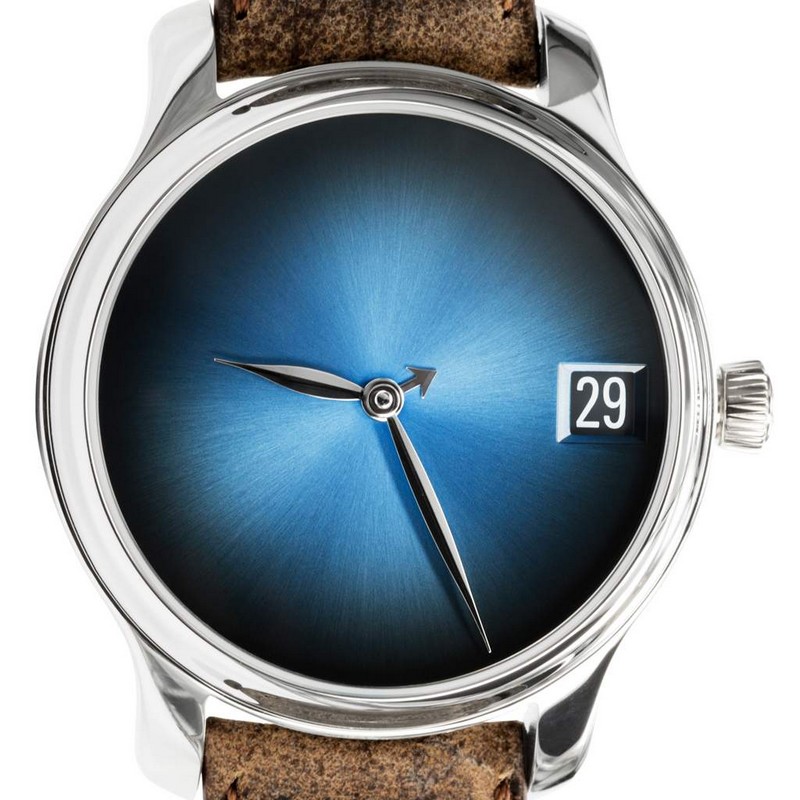 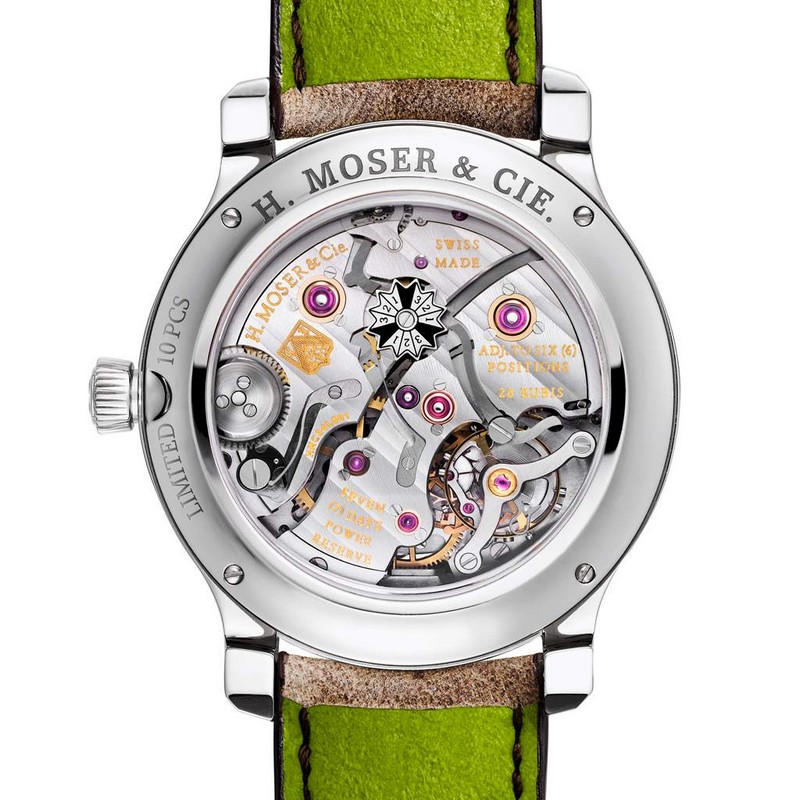 H. MOSER & CIE ENDEAVOUR PERPETUAL CALENDAR CONCEPT FUNKY BLUE
Two hands, one arrow, one large date and a star: these functional elements are the only details to be seen on the Perpetual Calendar Concept Funky Blue, the most minimal perpetual calendar ever produced. The steel design is pared down to the essential, with no indexes or logo. This means that the dial, majestic in the company’s signature sky-blue fumé, features nothing but the date, at 3 o’clock, the leaf-shaped hour and minute hands, and the small hand topped with an arrow, a marvel of ingenuity which indicates the months. The leap year indicator sits on the movement side.

The hand-wound HMC 341 calibre enables the date to be adjusted forwards or backwards at any time of day. Using the Flash Calendar mechanism, the date can be changed in a fraction of a second, driven by the energy accumulated during the day. 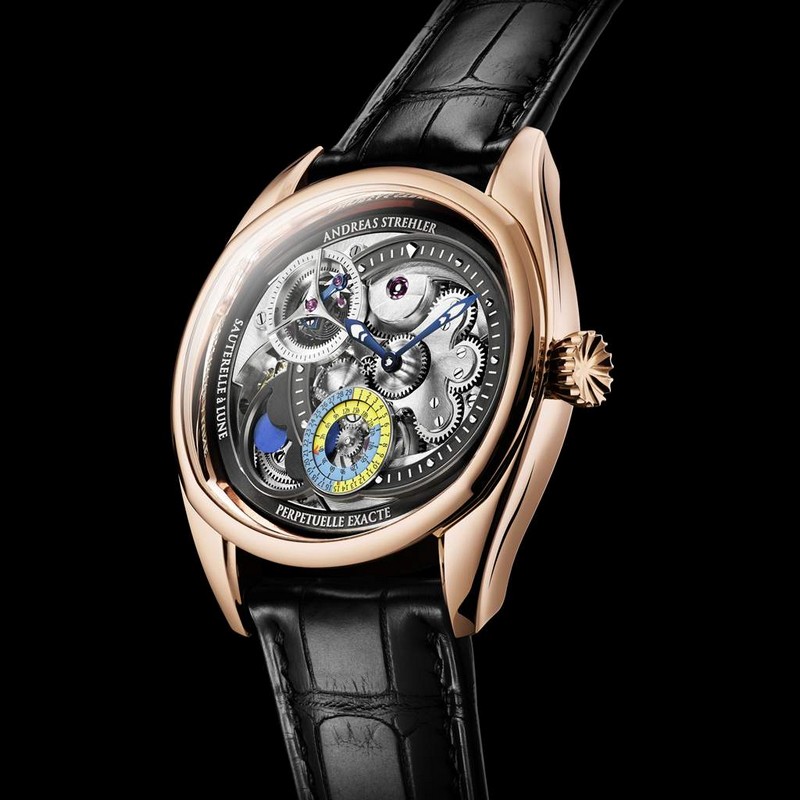 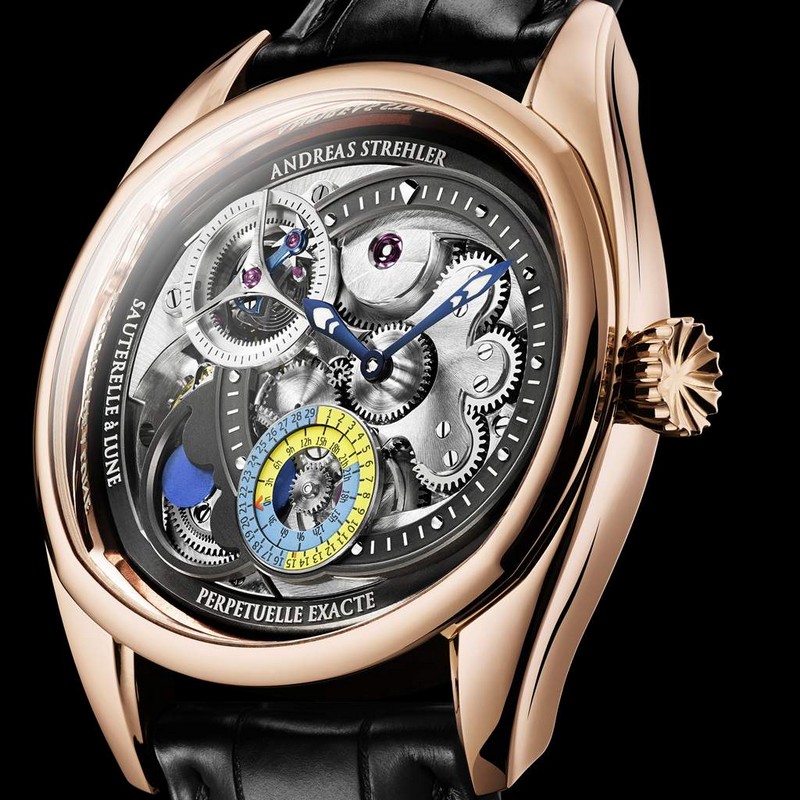 Andreas Strehler Lune Exacte watch
The phase of the moon display of the Lune exacte deviates by 1 day from the mean moon in 2’060’757 years, a Guinness Book World record. This phase of the moon can now be set and read extremely accurate to 3 hours thanks to a patent pending Vernier scale on the dial.
The phases of the moon have always had a great meaning for mankind. The height of the tide, sowing and harvesting, all depends of the phase of the moon.

Precise phase of the moon indications deviate from the synodic or mean moon by one day after a couple of hundred years; Andreas Strehler’s phase of the moon after two million years. This has won the Sauterelle à lune perpetuelle an entry in the Guinness Book of World Records. 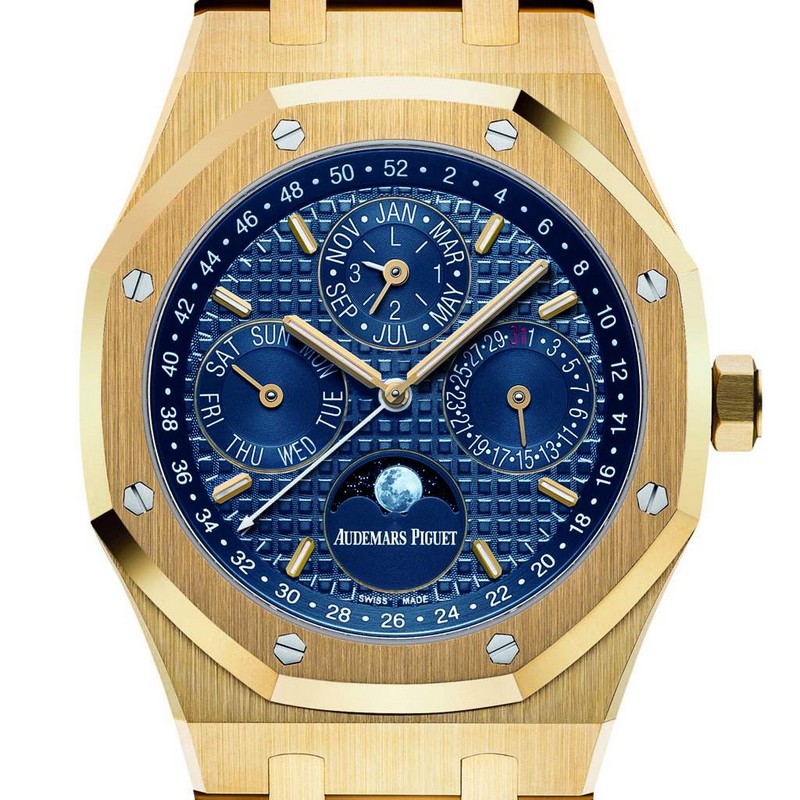 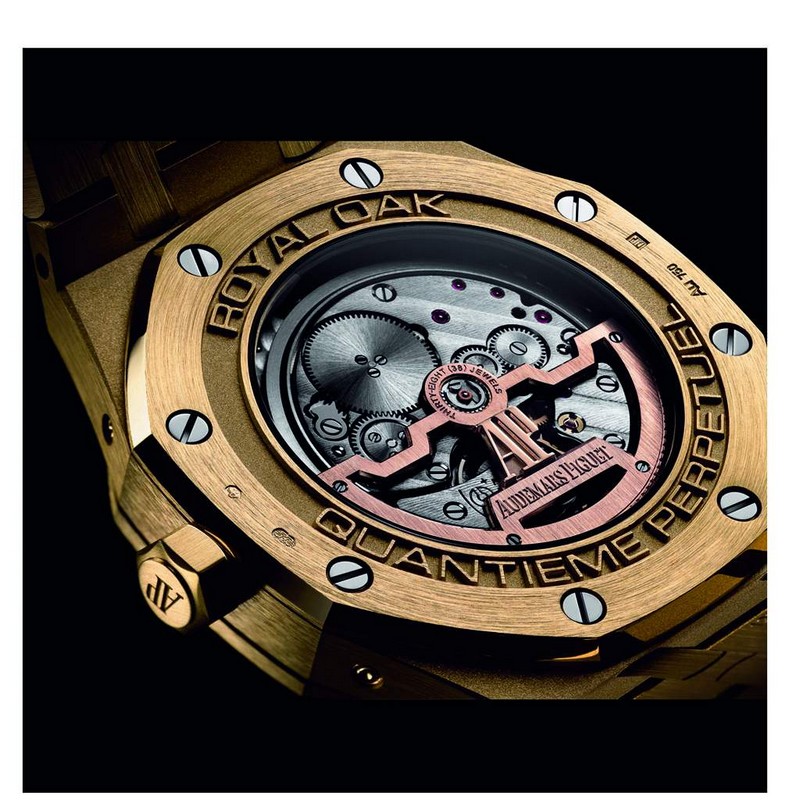 AUDEMARS PIGUET ROYAL OAK PERPETUAL CALENDAR watch
The Royal Oak Perpetual Calendar combines yellow gold with the most classic complication in all of watchmaking. Day, date, month, astronomical moon, with the week of the year displayed on the dial’s outer chapter ring and the essential leap year indication hold pride of place on the “Grande Tapisserie” decorated dial.

The new lighter blue of the dial harmonises beautifully with the warm yellow of the gold case, hour-markers and luminescent hands.

The “Perpetuel Secular Calender” 20th Anniversary is manufactured in a limited edition of 20 timepieces in platinum only. It celebrates 20 years (1996-2016) of perpetuel secular calender wristwatches developed, manufactured and assembled by ANDERSEN Genève.

To celebrate the 20th anniversary (1996-2016) of this iconic watch, ANDERSEN Genève adds one more complication to the “Perpetuel Secular Calender”: The seven days of the week will be displayed on the dial with hand engraved white gold buttons. The buttons represent the sun, the moon and five planets. The complication is made readable with seven small apertures to indicate the current day (one of the aperture being marked with a dot to indicate the current day of the week). The names of the days are named after contemporary deities, a system introduced in the Roman Empire during Late Antiquity. It starts with the Sun for Sunday, and then the Moon, Mars (Ares), Mercury (Hermes), Jupiter (Zeus), Venus (Aphrodite) and finally Saturn (Cronos) for Saturday. 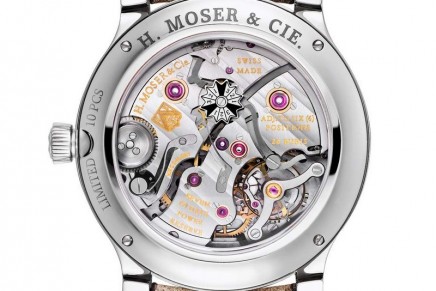 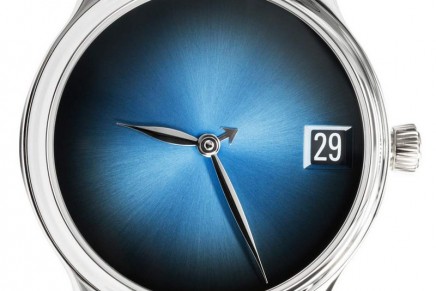 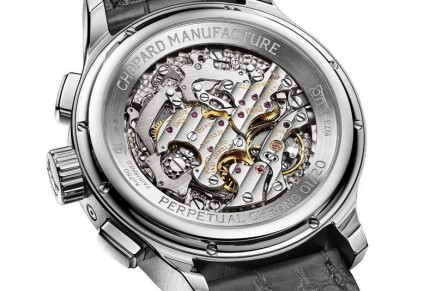 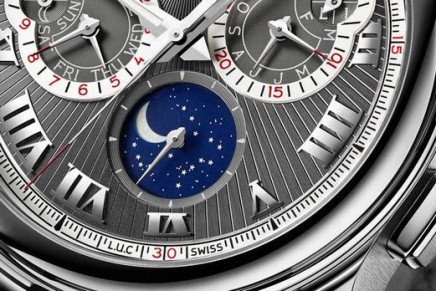 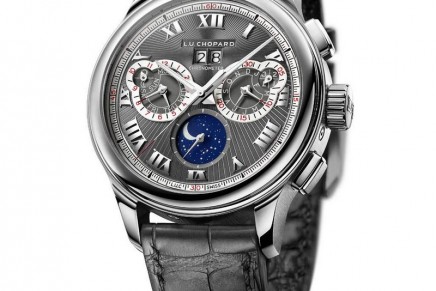 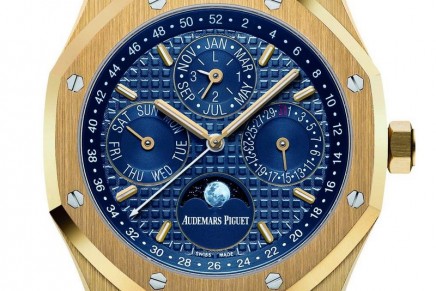 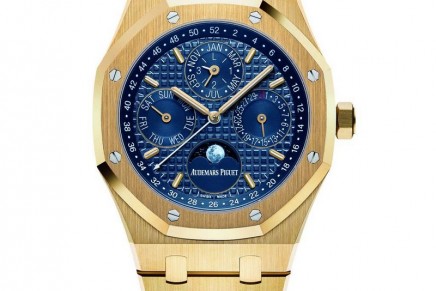 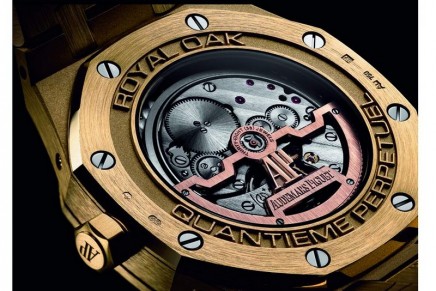 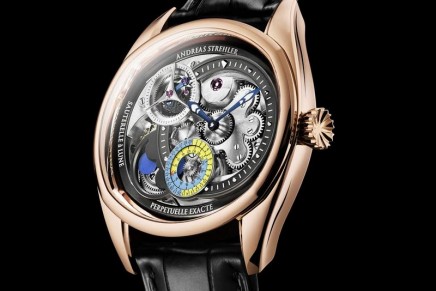 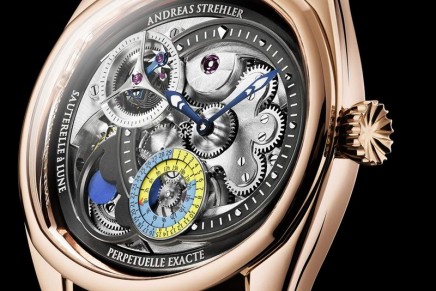