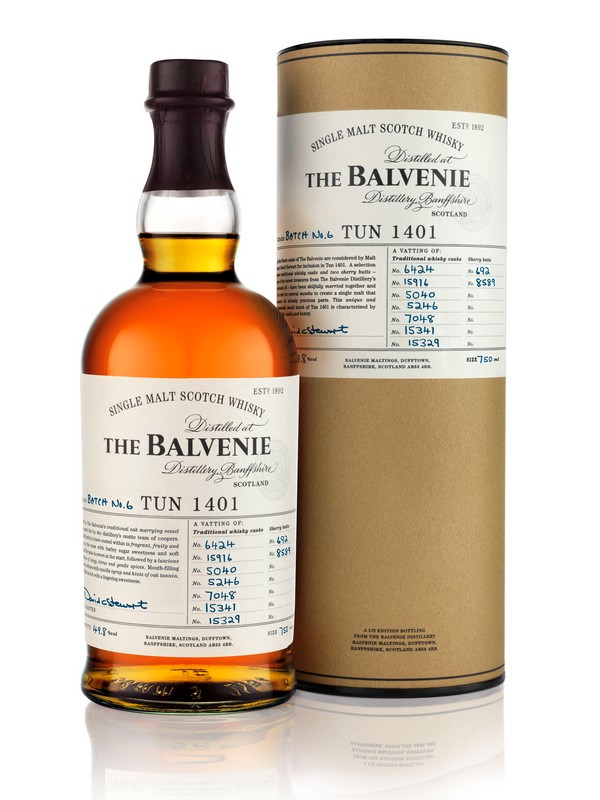 The sixth batch in the Tun 1401 series is an unrepeatable marriage of single malt that is fragrant and fruity with barley sugar sweetness and soft vanilla. The liquid is sweet at the start, followed by a luscious explosion of tangy citrus and gentle spices. Notes of honey combined with rich vanilla syrup and hints of oak tannin give a rich finish with a lingering sweetness.

‘The Balvenie is privileged to have some the rarest whisky maturing at our distillery,” said David Stewart, Balvenie Malt Master. “The Balvenie is unique among whiskies in that it maintains complete control of all the rare crafts that go into creating our special single malt Scotch whisky. Five rare crafts and a long wait have gone into making the complex Tun 1401 Batch 6, and it is important that this single malt meets the expectations of what has become a sought after release for The Balvenie drinker and whisky enthusiasts in the United States.”

The first batch of Tun 1401 was released in 2011, for sale only at The Balvenie Speyside Distillery while other batches have been available in select markets around the world. The US exclusive release of Tun 1401 Batch 6 follows the award winning Tun 1401 Batch 3, which won the IWSC Trophy and Gold medal in 2011.