Sotheby’s will auction off a first-edition printing of the US Constitution. @The Dorothy Tapper Goldman Foundation; @Sotheby’s

This Constitution Day – exactly 234 years since America’s Founding Fathers signed the country’s most significant and lasting document – Sotheby’s announces a copy of The Official Edition of the Constitution, the First Printing of the Final Text of the Constitution as a highlight of Sotheby’s Evening Sales this November in New York, marking the first time a manuscript or historical document will be presented in a fine art evening auction. On offer with an estimate of $15/20 million, the extremely rare document – now the longest continuing charter of government in the world – is one of just 11 known copies of the official printing produced for the delegates to Constitutional Convention and for the Continental Congress. This is the only copy of the first printing of the Constitution that remains in private hands.

The Constitution is on offer from the collection of Dorothy Tapper Goldman, and following the Evening auction, an additional group of approximately 80 constitutional and related documents will be on offer in a dedicated, live auction this November in New York. Immediately following the close of the live sale, a final group of rare works will be presented in a no-reserve online sale, open for bidding from 23 November – 2 December.

“The Goldman Constitution ranks as one of the most rare and coveted historical documents that has ever come to auction. We are honored to present this incredibly important printing of the Constitution to the public timed to coincide with Constitution Day, which only further reinforces Mrs. Goldman’s longstanding commitment to supporting civics education. On a personal note, I handled the sale of this very document in 1988; I have kept my eye on it ever since, and it is very exciting to see it return to the rooms more than three decades later. To present a document of this significance in an auction during Sotheby’s Evening sales this November spotlights how critical the Constitution remains as a foundational source for our understanding of democracy and the American spirit, which will always have universal appeal that transcends categories.” – Selby Kiffer, Sotheby’s International Senior Specialist in Sotheby’s Books & Manuscripts Department.

“A document as significant and meaningful as the Constitution deserves to be presented on the world’s biggest auction stage, and we are proud to offer this incredibly rare and special edition as part of our November marquee Evening Sales in New York. A testament to its universal appeal to collectors of all categories around the world, we are excited to mark a major milestone as the first time a manuscript or historical document will appear in a fine art evening auction.” – David Galperin, Sotheby’s Head of Contemporary Art, Americas. 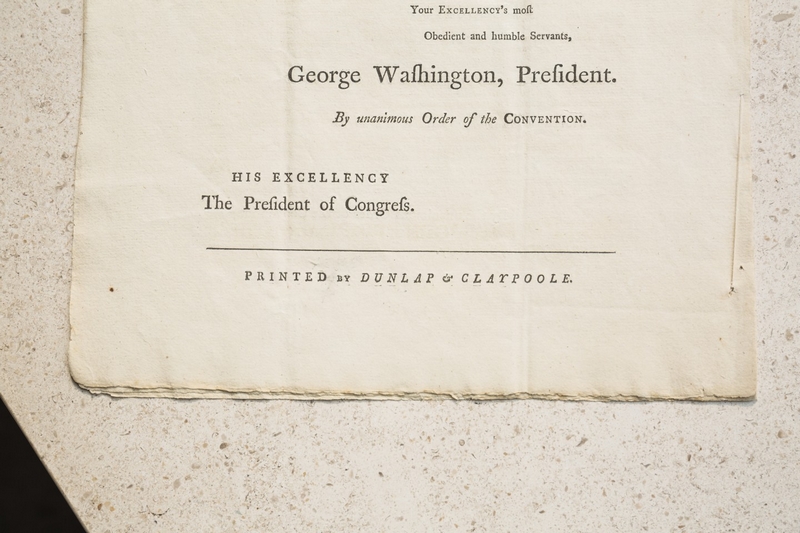 Sotheby’s will auction off a first-edition printing of the US Constitution. The Dorothy Tapper Goldman Foundation; @Sotheby’s

As relevant and contemporary as it was in 1787, and still hotly debated, the Constitution put into law the promise of the Declaration of Independence and marks the final step in the country’s transformation from British colonists to American.

In February 1787, following the inconclusive Annapolis Convention of the year before, the Continental Congress called for a convention to meet in Philadelphia in order to revise the Articles of Confederation, the country’s first, and largely inefficient, national charter. Meeting in secret, the delegates, presided over by George Washington, instead drafted an entirely new Constitution. Two early “draft” versions were printed for the committees of Detail and Style for the purposes of discussion and revision. After four months of labor, the final text was agreed to and printed for submission to the Continental Congress, with copies distributed to the delegates to the Constitutional Convention for use at their discretion. This “Official Edition” is the first printing of the final text of the Constitution.

Printed in an edition of about 500 copies by John Dunlap and David Claypoole, the official printers to the 3 Convention, only 11 copies are now known to exist, and of those, only the Goldman copy is in private hands. The Official Edition also prints the Convention’s accompanying resolutions and its letter, over the name of George Washington, to Congress submitting the Constitution for consideration.

Unique in its focus on constitutions for both governmental and civic organizations, the Dorothy Tapper Goldman Collection truly brings history to life, charting America’s rich history and infinite journey to achieve a “more perfect union” and allowing us to utilize documents from the past to interpret our nation’s history and inform our future. As the collector has said, “All of our important American documents were written by ordinary citizens who were engaged enough in their new country to have a hand in developing it. Our republic was an experiment in hope, assembled by men who knew more about what they did not want in a government than what it could be.” Mrs. Goldman began collecting as a young child and has developed a passion for collecting on a large scale, including American Indian baskets, Chinese works of art, Ming furniture, modern drawings, and much else—but the Constitution has long held pride of place among her
many collections.

The present document emerged in 1988 from a private Philadelphia collector, and was sold at Sotheby’s that same year for $165,000, when it was acquired by Mrs. Goldman’s late husband, S. Howard Goldman. It has remained in the Goldman collection ever since. Through the Goldman’s commitment to philanthropy and education, this edition of the constitution has been on loan at the New-York Historical Society, New York, the Museum of the American Revolution in Philadelphia, United States Supreme Court, National Constitution Center, Museum of the American Revolution, and more across the more than 30 years it remained in their collection. The document helped form the centerpiece of the Colonists, Citizens, Constitutions: Creating the American Republic exhibition at the New-York Historical Society, which showcased the deep holdings of the Goldman’s collection of important American documents. 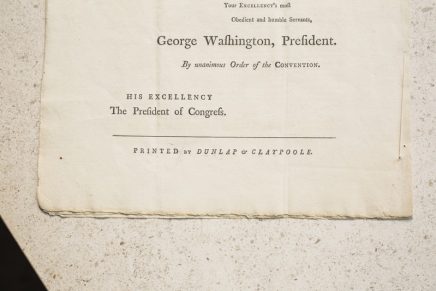