This new luxury hotel is an invitation to explore a region that is undiscovered and untrodden. Six Senses Southern Dunes, The Red Sea to Mark a Landmark Opening in Saudi Arabia, Inspired by the Historic Incense Trade Route, Desert Plains and Mighty Hijaz Mountains. 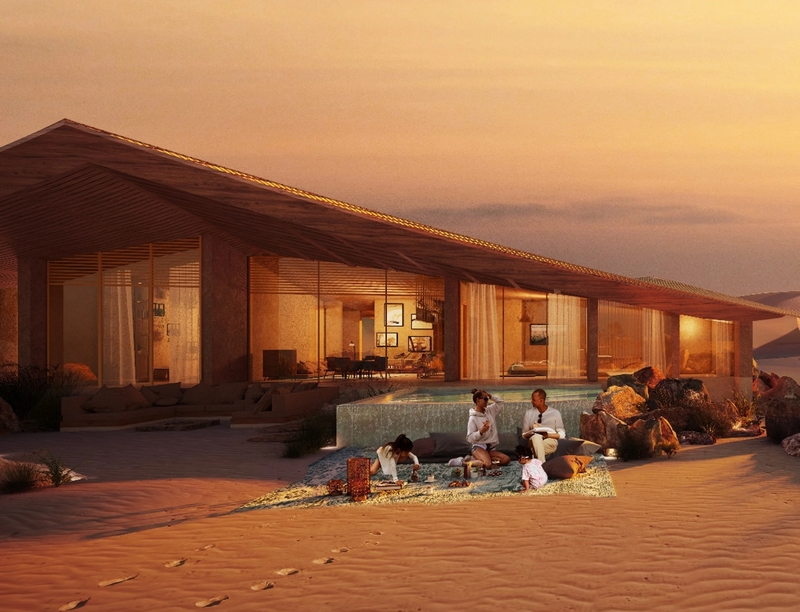 Desert hospitality: Six Senses Southern Dunes, The Red Sea is set to open during the first phase of development of The Red Sea Project, which is well underway and on track to be completed by the end of 2023.

Six Senses Southern Dunes, The Red Sea is one of two inland locations that together with coastal and marine initiatives form The Red Sea Project that spans 10,800 square miles (28,000 square kilometers) on Saudi Arabia’s west coast. It is set to pursue high environmental standards to demonstrate to the world that development can serve to preserve and enhance the region’s biodiversity and beauty.

Untouched and enticing, this part of the world remains relatively unknown. In ancient times, however, it was a busy trading route, used by the Nabataeans to transport luxury goods like silk, incense and textiles. Along the way, they would set up camp and gather around the fire under a starlit night. In 106 CE, the Nabatean Empire was annexed by the Romans, and Red Sea routes overtook land trading routes. Nabatean cities were no longer centres of trade, and so began their decline.

Six Senses is now recreating these elements to write the next chapter in the region’s story, combining an architectural approach that pays homage to the Nabataean heritage and majestic desert surroundings along with the brand’s trademark wellness formula and respect for centuries past. This vision is being realized in collaboration with the British architectural firm, Foster + Partners, renowned for its eco credentials and responsible design development.

The transfer route from the new Red Sea International Airport will take guests southeast along the coastal highway before turning east inland through serene desert mountains and narrow wadis and on to the 76-key resort.

The heart of the resort is the Oasis.

Inspired by a desert flower, the canopy is a self-shading structure, blurring the lines between the natural finishes inside and the native plants and water features outside. The base structure is a modular, precast system that ensures the building only touches the ground lightly to leave most of the site undisturbed, with minimal paving to ensure the surrounding pathways remain natural and authentic.

The plan for the Oasis is to gather vibrant activities and functions under one roof, including the reception, lobby lounge, boutique, meeting spaces and prayer rooms, plus a community lounge and Earth Lab. The Artisan Village will host four pods to tell the story of the region’s history and cultural heritage through arts and crafts, dance and music. The all-day dining restaurant is complemented by a chef’s table and cooking school, along with a juice bar, brew bar, and water bar. 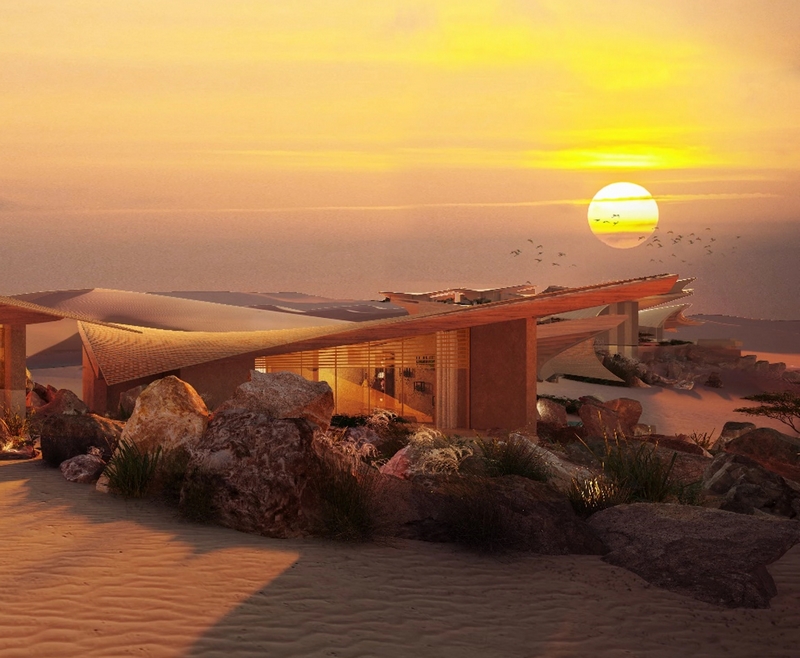 Surrounding the Oasis is a collection of guest rooms featuring an open-plan bedroom and living area, and an outdoor terrace allowing guests to enjoy the serenity of the pristine landscape and become one with nature.

Clusters of villas occupy strategic peaks to offer prime aspects over the landscape. Ranging from one to four bedrooms, the villas are inspired by the sandy dunes, with their double-layered undulating roofs creating their own unique scenery. Inside, the interiors also reflect the tones and textures of the desert, with soft furnishings drawing from the rich colors and patterns of traditional tribal dress.

A vision of its own, the spa features self-shaded water surfaces and deep cold pools creating a contrast to the hot climate. Highlights include a Holistic Anti-Aging Center, male and female grooming centers and indoor zones with wet facilities, sensory suite, outdoor treatment cabanas with a relaxation area, and a pool bar. 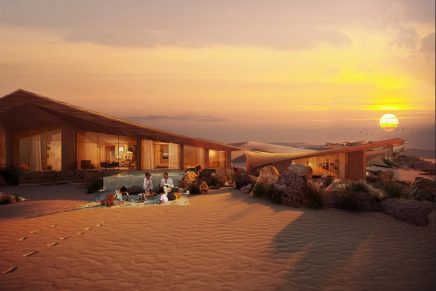 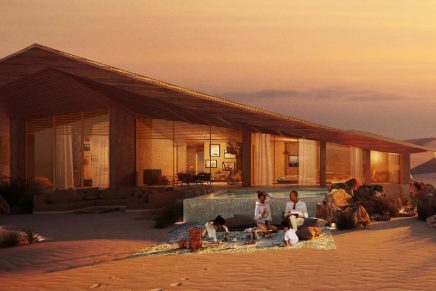 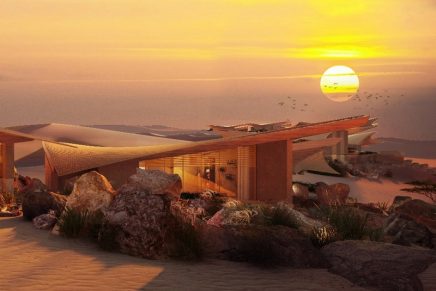