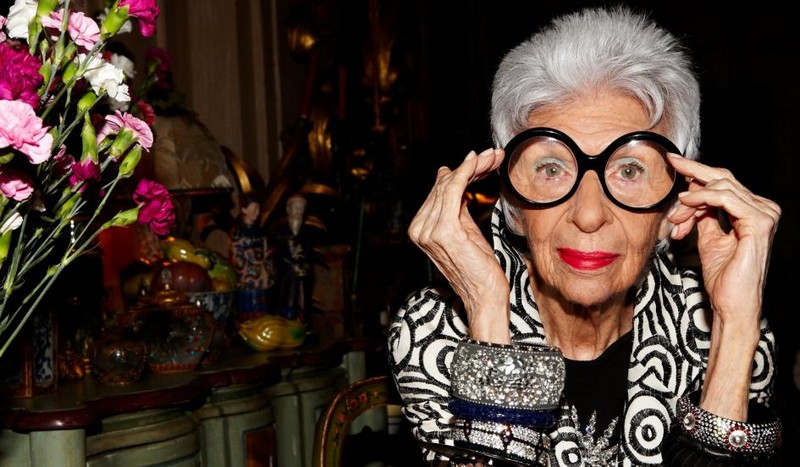 This article titled “Six lessons in chic from the Iris Apfel documentary” was written by Hannah Marriott, for theguardian.com on Wednesday 29th July 2015 09.37 UTC

A typical Apfel outfit comprises clanging armfuls of bracelets and multiple layers of colourful, chunky beads. Her trademark, though, is a pair of oversized, owlish spectacles, which are so bold that they add to the overall impression that even her weirdest fashion choices are unquestionably stylish and deliberate. Which, of course, they are. For Apfel, this talent in the blood: “My mother worshipped at the altar of the accessory,” she says. “She could do things with a scarf that I have never seen anyone do.”

2. Denim can be remarkable

Judging by the bold colours and mindbending patterns of much of Apfel’s wardrobe, you might not expect her to describe herself as a “denim freak”. In fact, the film reveals that some of her coolest ensembles centre around oversized denim shirts, the perfect laid-back counterpoint to all that clanging jewellery. The shirts embroidered with cartoon cows and Mickey Mouse as a cowboy are particularly fetching.

Apfel’s house is complete loopy, full of Christmas decorations and children’s toys arranged into unusual tableaux – such as a Kermit puppet riding a life-sized plastic ostrich. Apfel’s husband, Carl, who celebrates his 100th birthday in the film, fully backs Apfel in her eccentricities and has a strong spectacles game (small, round, tortoiseshell) himself.

4. Your vocabulary can be chic, too

“She looks very Voguey” … “the cat’s pyjamas” … “going gangbusters”. While much of the fashion industry ends up stuck using just a handful of phrases (“obsessed” and “amazing” figure highly), Apfel is full of wonderfully idiosyncratic expressions.

Apfel describes being told, by a shop manager, that she is “not pretty and will never be pretty”, and she confirms she that doesn’t believe herself to be so – and doesn’t care. “I’m not a pretty person. I don’t like pretty – so I don’t feel badly … Most of the world is not with me, but I don’t care.”

Apfel describes the hours tracking down pieces of jewellery and haggling with shop owners over fabric: “It’s hard work; you really have to put a lot of effort into it. Everything I have, I go out and find.” And if you don’t fancy all of that faff? She says she would never judge another person’s outfit if they are happy that way. “It’s better to be happy than to be well dressed.”