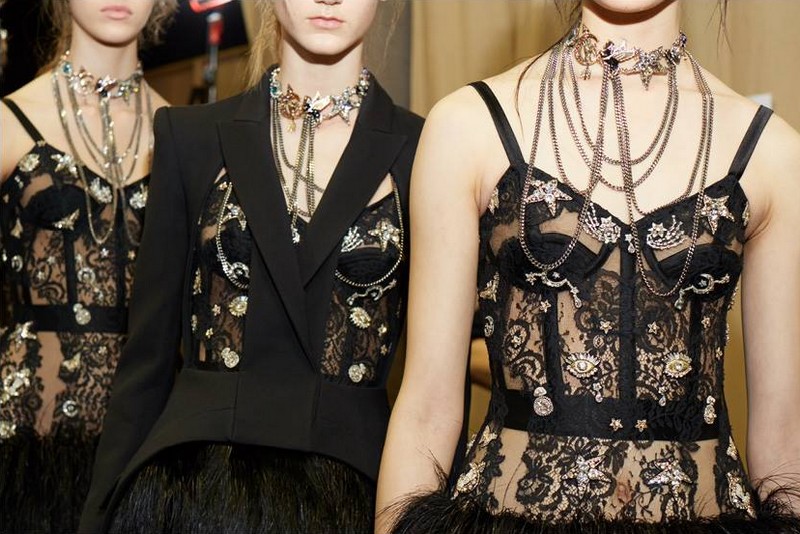 Sarah Burton’s decision to stage the first Alexander McQueen womenswear catwalk show in London for 15 years, rather than in Paris, was taken for a practical, rather than sentimental, reason: at 38 weeks pregnant, she does not wish to travel.

Nonetheless, the homecoming – not just to London but to the Royal Horticultural Halls, a venue where, Burton said backstage, she worked on her very first McQueen show 20 years ago – turned out to be a lucky charm. This was a stunning collection, and a fashion spectacle with soul.

To add to the buzz around this show, Burton has recently been the subject of fashion rumour. Her name is currently linked with the post at Dior, vacant since the departure of Raf Simons. While this may well be idle gossip, it will not go unnoticed that this collection was particularly feminine, particularly romantic and featured clean, beautiful tailoring and knockout red carpet gowns – all the characteristics of Burton’s work that would make her an asset at Dior. Meanwhile, those McQueen quirks that seem perhaps at odds with what Dior stands for (an air of darkness and macabre, the intense and obscure historical and artistic references) were less in evidence this time around.

The same motifs, shrunk to the size of jewelled charms, featured on sexy, sheer and cut-out lace and ruffle cocktail dresses in black and powder pink, worn with marabou-feather trimmed sandals or under quilted silk-satin eiderdown coats. A perfect tuxedo jacket with a slightly exaggerated shoulder – subtly but unmistakably McQueen – went over a barely there slip.

For all the lyrical references, there was a pleasing directness to this collection. Real-world cocktailwear segued into red carpet drama: a sheer, polka dot net dress with a unicorn caught the eye on the catwalk, but the more classically embroidered gold-and-pearl toned gowns, bodices shaped and enlivened by close embroidery, looked ready to hit the Oscar red carpet.