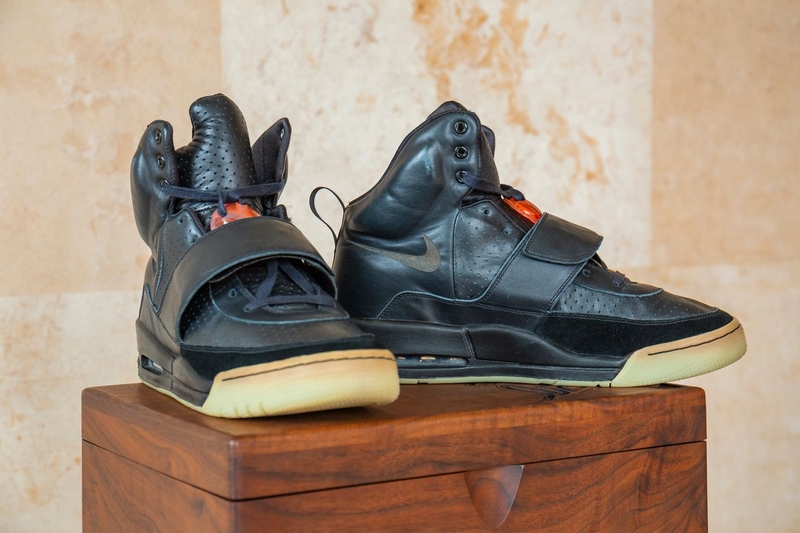 This sneaker model is the most valuable sneaker in the history of the world.

These are the sneakers Kanye West wore the night the Yeezy was introduced to the world and redefined what a
signature shoe could be. It was an entirely new silhouette, created for an artist rather than an athlete. Though Kanye West has partnered with adidas since 2013, the Nike Air Yeezy I and Air Yeezy II are still some of the most coveted sneakers by collectors, and are foundational to the trajectory of the Yeezy brand as we know it today.

The Air Yeezy I was dreamt up by Kanye and designers Mark Smith and Tiffany Beers in the Nike Innovation Kitchen
during two years of intense effort. They combined design elements from several early Jordan shoes and added
Kanye’s signature single strap for comfort. The shoe features a glow-in-the-dark outsole, a translucent red “Y” shaped lace lock, and soft plush leather material. This shoe’s design hammered home the idea that signature footwear should sit at the intersection of premium quality and iconic design.

After touring museums around the world, the Air Yeezy 1 was obtained by sneaker investing platform Rares in a
record-setting deal with Sotheby’s, and will be made available to the sneaker community, that made it so valuable to begin with; in the summer of 2021. 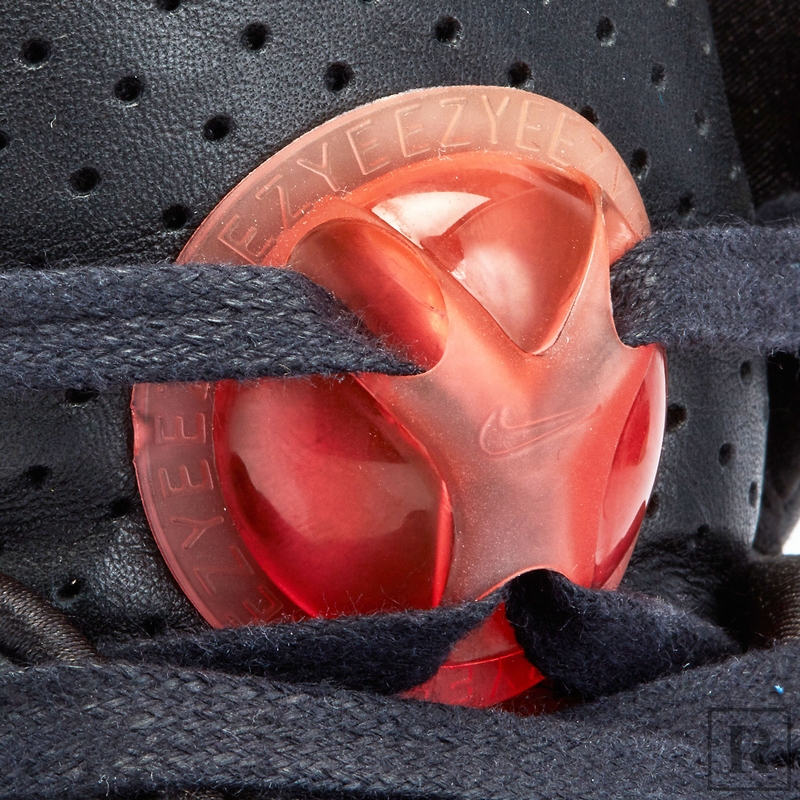 “Our goal in purchasing such an iconic shoe—and a piece of history—is to increase accessibility and empower the communities that birthed sneaker culture with the tools to gain financial freedom through RARES,” – Gerome Sapp, CEO and co-founder of RARES.

The sneakers were originally sold as ‘Grammy Worn’ in benefit of a charity Nike frequently supports – the
Doernbecher Children’s Hospital. Aside from this clear provenance, Sotheby’s utilized external consultants to both
photo-analyze the sneakers (comparing them against Kanye’s performance that evening), as well as looking at build,
tagging, box and makeup to determine the sneaker’s authenticity.

Sotheby’s partnered with Suede One to complete side-by-side comparisons of the present lot with photos of Kanye
wearing the sneakers at the 2008 Grammys.

The Grammy Air Yeezy samples were built in Nike’s lab, known as the ‘Innovation Kitchen’ at the company’s
headquarters in Beaverton, Oregon. Creative Director Mark Smith kept the project so under wrap that he released the shoes to Kanye for the Grammys with the condition that they would be returned as soon as possible following the
performance. The shoe is made of soft black leather with perforated detailing throughout the upper and the heel
overlay is branded with a tonal Swoosh. The design features the iconic Yeezy forefoot strap and signature ‘Y’
medallion lace locks in bright pink (which were not worn by Kanye during his performance). A custom lasered wooden box is included, which features a design and etching by the Yeezy 1 creator, Mark Smith.

“The sale speaks volumes of Kanye’s legacy as one of the most influential clothing and sneaker designers of our time, and of the Yeezy franchise he has built which has become an industry titan,” – Brahm Wachter, Sotheby’s head of Streetwear and Modern Collectables. 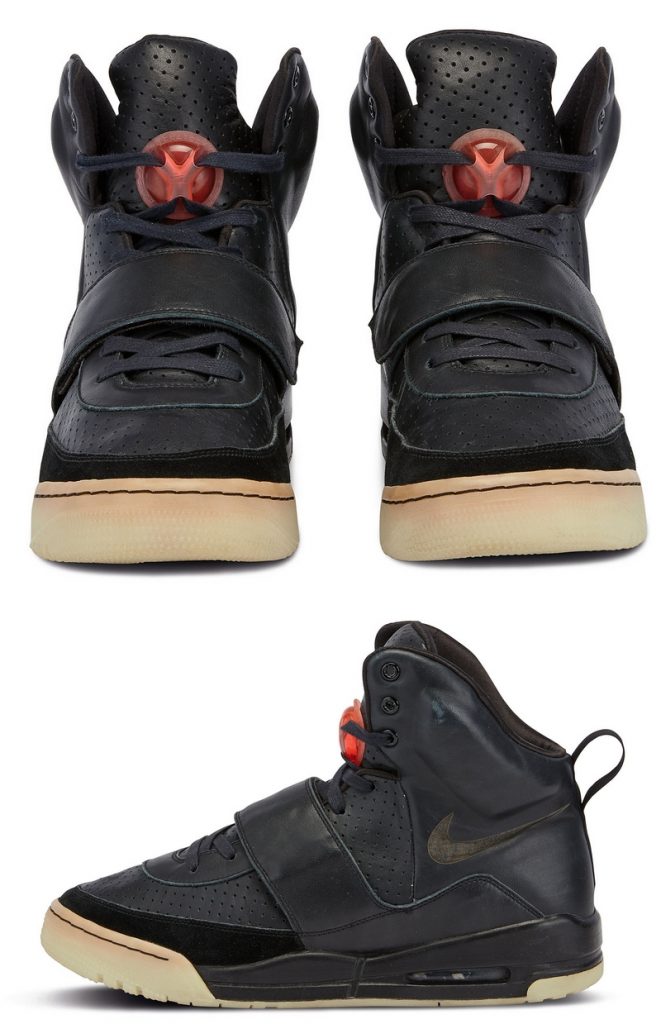 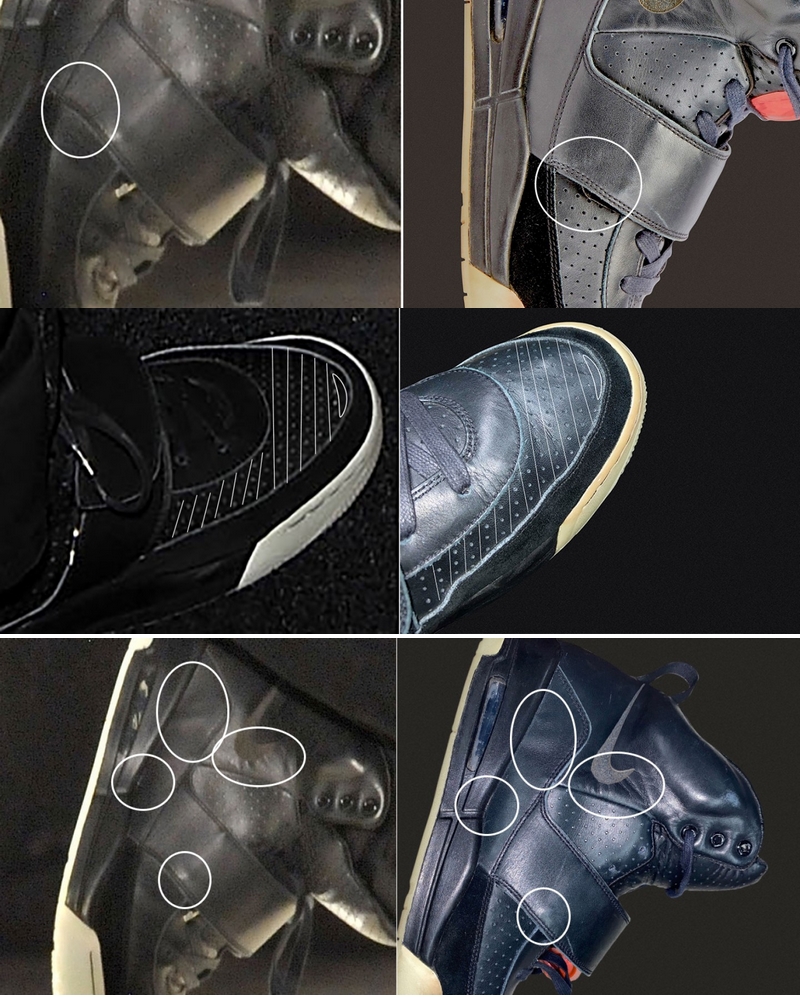 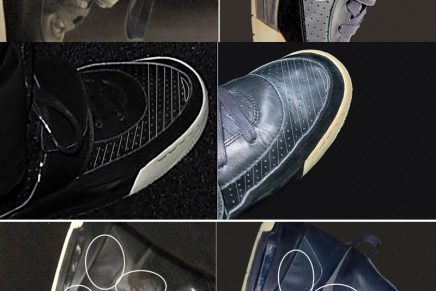 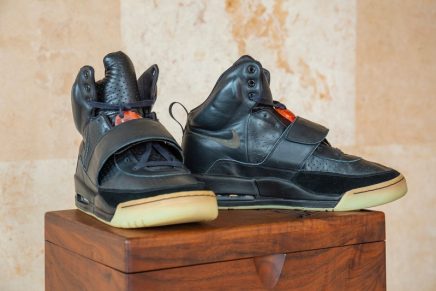 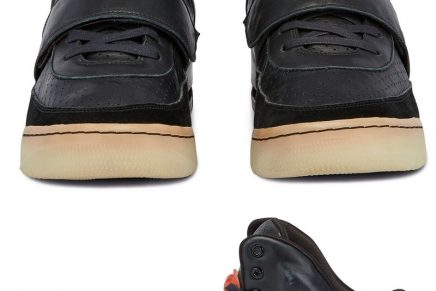 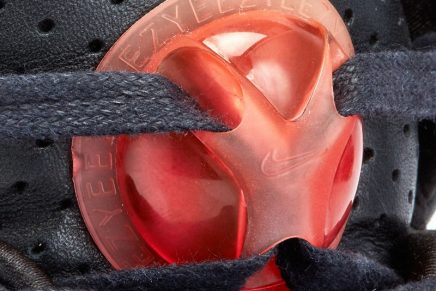