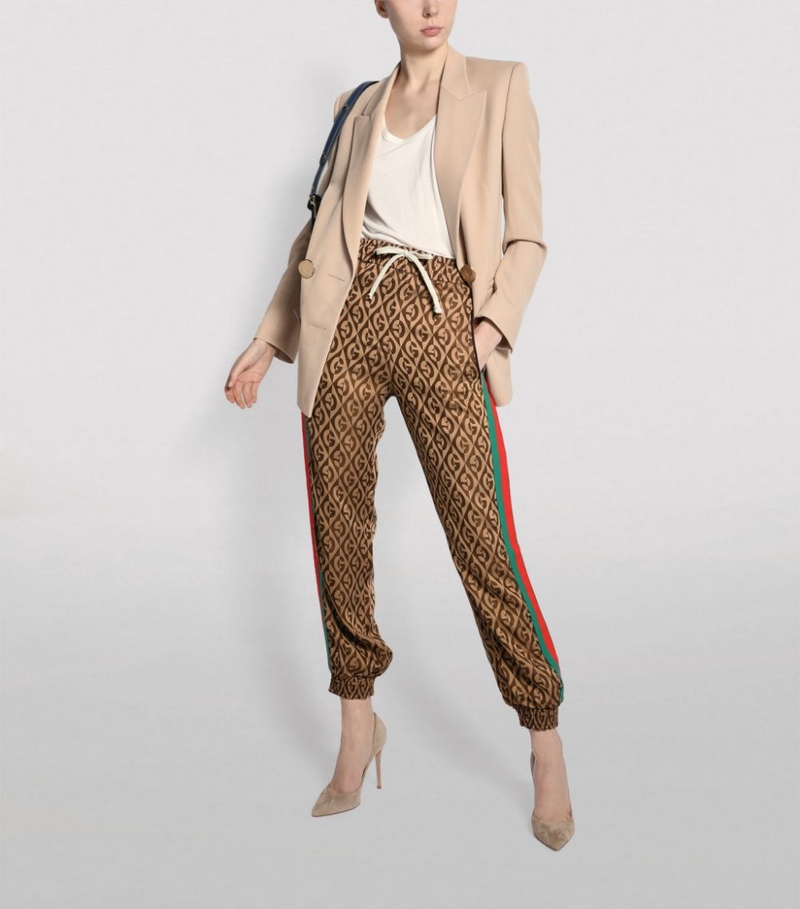 This article titled “No sweat: how tracksuit bottoms became the height of lockdown fashion” was written by Priya Elan, for The Observer on Saturday 25th April 2020 14.55 UTC

Traditionally, tracksuit bottoms have been the enemy of fashion. Karl Lagerfeld’s withering, oft-quoted maxim – “Sweatpants are a sign of defeat. You lost control of your life so you bought some sweatpants” – summed up an attitude, certainly in some luxury fashion circles.

But lockdown has brought change. Last week, Anna Wintour, Vogue editor in chief, stunned many fashionistas by posting a photo of her work-from-home outfit: a Breton top and joggers. For context, during an otherwise breezy online Q+A session held last July, the air turned decidedly frosty when a fan piped up with: “Hey Anna! Do you wear sweatpants?” Wintour replied with a stern: “No!” followed by a dramatic pause.

One Twitter user wrote: “This could be the end of the world as we know it. Anna Wintour is seen in sweatpants for the first time ever.”

Maybe not the end of the world, but certainly possibly the end of an era. Joining Wintour is model Bella Hadid, who wore a white pair on TikTok, and influencer Courtney Trop (342,000 followers) sported a pair from the Miaou label.

“Since lockdown, we have seen a lift of 1,000% on tracksuit bottoms,” says Serena Rees, CEO of gender-neutral brand Les Girls Les Boys. “It’s been fantastic.”

According to the tracking firm Edited, sales of sweatpants are up 36% compared with the same period in 2019, while searches have increased by 2,000% since last March on influencer platform Liketoknowit.com.

The pandemic has softened towards the tracksuit bottom; elevating it to the work-from-home trouser of choice. “Most people just want an easy, quick choice in these times. They have become the new jeans-and-nice-top,” explains fashion stylist Bianca Nicole.

But not everyone is convinced. Last week, Adam Tschorn, deputy fashion editor of the LA Times , wrote an impassioned plea against the rise of the tracksuit bottom in our work-from-home environment. “Please, can we put away those sweatpants, ratty, grey, decades-old collegiate sweatshirts and obscure minor league baseball caps, and start our workdays looking like we deserve the pay we’re lucky enough to be earning while the world around us burns?”

Perhaps he was recalling the last time sweatpants were popular – in the early 2000s, with the rise of brands like Juicy Couture, and celebrities such as Britney Spears, Lindsay Lohan, Amy Poehler (as the naff “cool mom” in Mean Girls) and Paris Hilton (she infamously said she owned 100 pairs), wearing them as loungewear.

The popularity of the jogging bottom has prompted questions about our post-coronavirus workwear: will we be trading our pencil skirts and chinos for something with an elasticated waist? “I was wondering that myself,” says Sofia Prantera, the designer behind label Aries Arise, whose No Problemo tie-dyed tracksuits have become a cult favourite.

“I think there are two outcomes: ‘I never want to see sweatpants ever again’ or ‘how will I ever be comfortable in fixed-waist trousers?’ Hopefully for us the latter.”

Rees says: “We’ve moved a long way (forward) with office attire. There’s absolutely a place for them in the workplace.”

But, cautions David Telfer head of design at Sunspel, “it is about what you feel socially comfortable going to work in”.

Are joggers indicative of a bigger change? A hitherto previously unexplored era where all areas of our lives are inextricably mixed? Kim Toffoletti, associate professor of sociology at Deakin University in Australia, thinks so. “Their popularity at the moment might precipitate a move away from more formal attire, an emphasis on looking ‘professional’ at work, and more flexibility between boundaries of living and working,” she says.