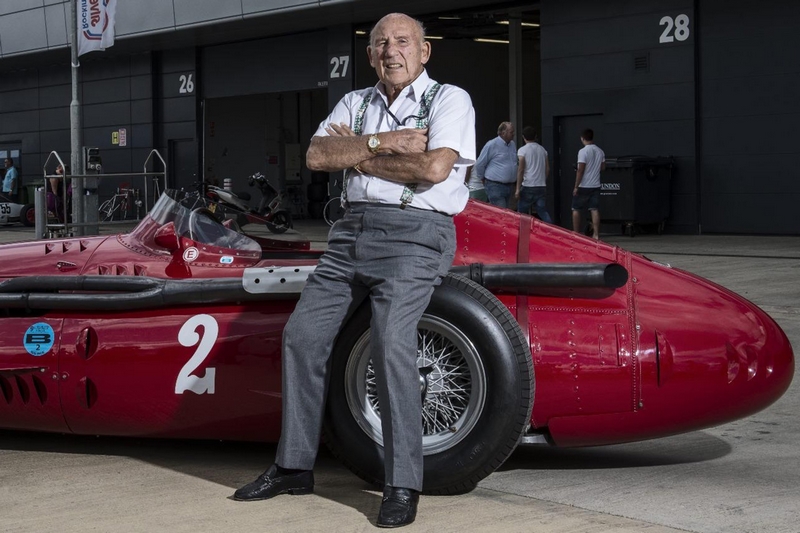 This article titled “From Monza to Monaco: Stirling Moss’s five best races” was written by Richard Williams, for The Guardian on Sunday 12th April 2020 13.00 UTC

As a member of the Mercedes-Benz works team in sports car races as well as Formula One, Moss took part in this celebrated and highly dangerous 1,000-mile time trial around Italy. With the journalist and former sidecar champion Denis Jenkinson alongside him in an open-topped 300SLR, he set off at 7.22am, among the last of the 661 cars to roll down the ramp in Brescia. Ranging from barely modified 500cc Fiats to cars that, like the Mercedes, were basically Formula One machines with two seats and bigger engines, the entrants were released at one-minute intervals.

Jenkinson’s job was to keep Moss briefed by using a system of hand signals while reading notes carefully compiled during their reconnaissance runs. They arrived back in Brescia just over 10 hours later, having averaged 97.95mph over a course running on unguarded public roads through mountain passes, countless villages, and cities including Verona, Ravenna, Rome, Siena, Florence and Bologna. Their nearest rival – Juan Manuel Fangio, driving solo in a similar Mercedes – was 32 minutes behind. Two years later the race would be banned after a series of fatalities involving spectators, and Moss’s record would stand in perpetuity.

After Mercedes’ decision to withdraw from racing, Moss went to Maserati as their No 1 driver for the 1956 season, driving the firm’s superlative 250F grand prix car in competition with a formidable Ferrari team led by Fangio and including Eugenio Castellotti, Luigi Musso and Peter Collins. Moss had driven his own Maserati in 1954, earning the respect of the factory by matching and bettering the performance of their official drivers. After an unruffled win at Monaco, followed by races blighted by mechanical problems, the season finished at Monza, where Ferrari’s young Italian drivers were desperate for the win.

In the opening laps, Moss sat calmly behind the Ferrari quartet, using prudence and racecraft as Castellotti and Musso destroyed their tyres while scrapping for the lead on the harsh surface of the circuit’s high-speed banking. After a battle with Fangio and Harry Schell’s Vanwall, Moss emerged in the lead – only to run out of fuel close to the end, needing to be pushed into the pits for a swift fill-up by Luigi Piotti, another Maserati driver, before re-emerging to take the victory and become the first British driver to win the Italian Grand Prix.

Driving with a patch over an eye into which his wife had accidentally poked her finger, Moss secured this classic victory with an elaborate game of bluff. Temporarily released by the Vanwall team, whose new cars were not ready to be sent to Buenos Aires for the opening round of the season, he took the wheel of a Cooper-Climax entered by his friend Rob Walker, the heir to a whisky fortune. The tiny Cooper, a modified Formula Two machine with a two-litre engine (500cc smaller than its rivals) mounted behind the driver, was not taken seriously as a competitor for the traditional front-engined machines.

Unlike them, however, the lightweight Cooper had the potential to run the entire 200-mile race without refuelling – and perhaps, although they kept this to themselves, on one set of Dunlop tyres. His rivals assumed that the seemingly inevitable tyre stop would ruin his chance of victory, thanks to the use of wheels held on by four nuts that needed unscrewing individually instead of the quick-release knock-off hubs seen on the Ferraris and Maseratis. Towards the end Moss and his mechanic, Alf Francis, fooled them with the pretence of preparing for a pit stop that never came. By the time the Cooper took the chequered flag, its tyres were down to the canvas.

In long-distance sports car races Moss could always be relied upon to dig a slower co-driver out of a hole – in this case almost literally. Of his several victories in the lovely Aston Martin DBR1, the most remarkable came in a seven-hour race at the Nürburging. Winding through the Eifel mountains, the 14-mile circuit presented a challenge that often provoked his finest displays. On this occasion he set the fastest lap in qualifying and drove the first three hours of the race without a break until handing over to his co-driver, Jack Fairman, having built a lead of five minutes over the pursuing Ferraris.

Fairman, a veteran journeyman, spun into a ditch while lapping a slower car. Having manhandled his car out, he gave it back to Moss more than a minute behind the leader. Moss rapidly regained the lead and extended it to three minutes before returning the wheel to Fairman, who drove two more laps in which he fell more than a minute behind the Ferraris of Phil Hill and Tony Brooks. Returning to the fray for the concluding three laps, Moss caught and passed his two fellow grand prix aces in time to cross the finish line with a 21-second advantage.

Moss’s patriotic preference for driving British cars and his interest in mechanical innovation are often cited as the underlying reasons why underpowered and unreliable cars cost him the Formula One world championship. But they also created the possibility of performances like the one he gave in Monaco on 14 May 1961, which he described, 50 years later, as “probably my greatest drive in a Formula One race.” That year he was at the wheel of Rob Walker’s Lotus 18, which he had taken to victory in the principality a year earlier. But the regulations had changed and now he was up against a gaggle of Ferraris on their way to dominating the season.

To combat the extreme heat of the day, the Lotus’s side panels were removed. A crack discovered in the chassis had to be welded on the starting grid. His four-cylinder engine lacked power. But on lap 17 he overtook Ferrari’s two American drivers, Phil Hill and Richie Ginther on lap 17, and held them off for the remaining 83 laps with a breathtaking display in which he could never afford to drop below the levels of concentration and speed normally required for a pole-position lap in qualifying. On a circuit designed to rewarded his mixture of brio and precision, his virtuosity was never more clearly displayed.