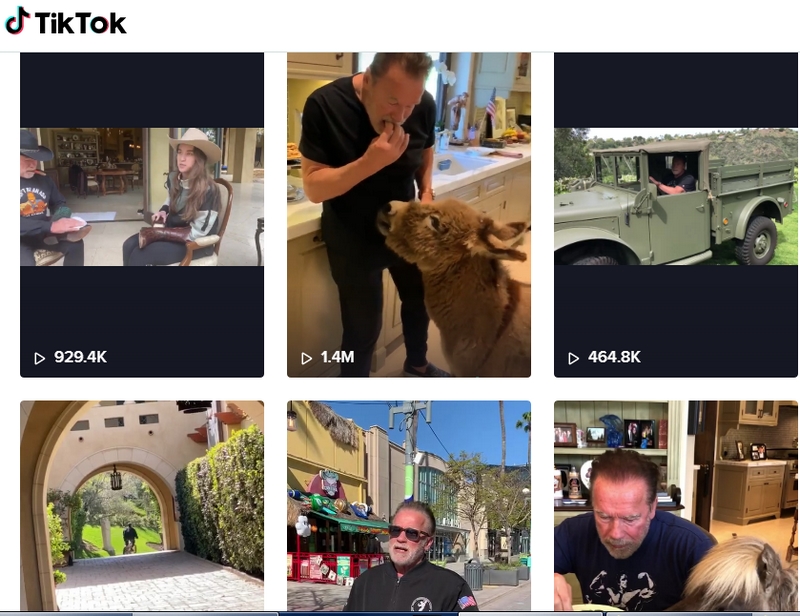 This article titled “From Arnold Schwarzenegger to Naomi Campbell: the best of celebrity quaran-TV” was written by Kate Hutchinson, for theguardian.com on Tuesday 14th April 2020 14.12 UTC

The supermodel isn’t exactly known for being down-to-earth: in her coronavirus travel video, released a month ago, she wore a hazmat suit to board a plane. We all thought she was being typically extra – like when she doused a plane seat in hand sanitiser – but look at us now. It turns out, though, that the cleaning demos were just a springboard for the next video chapter of “Humanising Naomi”. Last week, she launched a live interview series called No Filter, in which she FaceTimes famous friends for a casual catchup to reflect on their respective careers.

In episode one, her first guest is Cindy Crawford, and we learn that catering can make or break a fashion shoot (“Do you remember the amazing catering we had in the desert?” asks Naomi. “I never understood why, when it’s a bunch of models, they brought out sandwiches and ribs!” replies Cindy.) Just like having a girly catchup with your mates, if your mates had framed photographs of themselves all over their walls.

They are all at it, those celebrities, cooking up a storm on their 10-burner, multiple-oven cooking ranges. Singer JoJo has been Instagramming her baking attempts, while Gizzi Erskine and Professor Green have teamed up to livestream Giz & Green’s Monday Night Fakeaway and of course there is the much-mocked Queer Eye cook Antoni, making even simpler fare than usual. Actor Florence Pugh, however, is the queen of the quarantine cook-off. Her how-tos include the relatable combination of “browned bread” with Buck’s Fizz and tips for not wasting all the “banged up” veg sitting in the bottom of the fridge. She delivers tips with Nigella-rivalling flair, while the way she talks about chopping an onion is Oscar-worthy.

Arnie has mastered TikTok during quarantine with a series of all-American videos of himself and his family, on his ranch, social distancing from the outside world. There he is, the action hero, pushing his adult son on a swing. Instructing his daughter on how best to polish his enormous cowboy boot collection. Er, feeding his pet donkeys biscuits in the kitchen. Clearly, this has legs as the next Keeping Up With The Kardashians – a super-surreal version in which everyone has lovable farm animals instead of makeup enterprises.

Miley Cyrus is one of a kind. While other pop stars try to show how real they are inside with a lightly scripted Netflix “documentary”, Cyrus makes a deranged kids’ TV show set out of foil and disco lights and films herself getting everyone from Paris Hilton to Elton John on to her virtual sofa. There’s a deeper goal here, too, with advice on how to stay cheery in dark times. Cue A-Listers such as Elton John, Alicia Keys, Diplo, Paris Hilton and Nicole Richie sharing their sanity strategies in the sort of DIY, scrappy format you might have once seen on late-night 90s cable TV.

It’s very “LA” – earnest but uplifting, with lots of chat about finding your inner light – but Cyrus is a human sunbeam. She bounces between guests and themes, sometimes sporting her Black Mirror character Ashley O’s lavender wig, debating whether to stay in her underwear to talk to Elton and, generally, as guest Zoë Kravitz puts it, “keeping the frequency high”. The series is on a hiatus but there are 15 episodes to rewind through. Watch your back, Ellen!

She might not be the starriest name on this list, but she is definitely one of the most talented: former Hear’Say member-turned-Classic FM presenter Myleene Klass is hosting live music lessons for kids, roping in her own two adorable future performers, Ava and Hero, for some stay-at-home fun. Videos include “Klasses play the glasses!”, where – you guessed it – they use glass tumblers to help demonstrate how sound waves work. There are a few fumbled science bits, and it can’t help but come over a touch smug as Klass and mini-Klasses play their cellos or pianos in their massive kitchen. But if you are desperate to entertain little Petunia and Tarquin while face-to-face music lessons are off limits, this is time well-spent.