The Bell & Ross Skull watch family has become an iconic collection and is now approaching its tenth anniversary.

The skull symbol has been used for centuries, particularly by pirates. They consider it a talisman that brings them courage and frightens off their enemies. It is also used by the military, as a constant reminder of their own vulnerability. These professionals often face death in the line of duty and this image appears on their uniforms and aircrafts. The Bell & Ross BR 01 Laughing Skull watch pays tribute to them all. 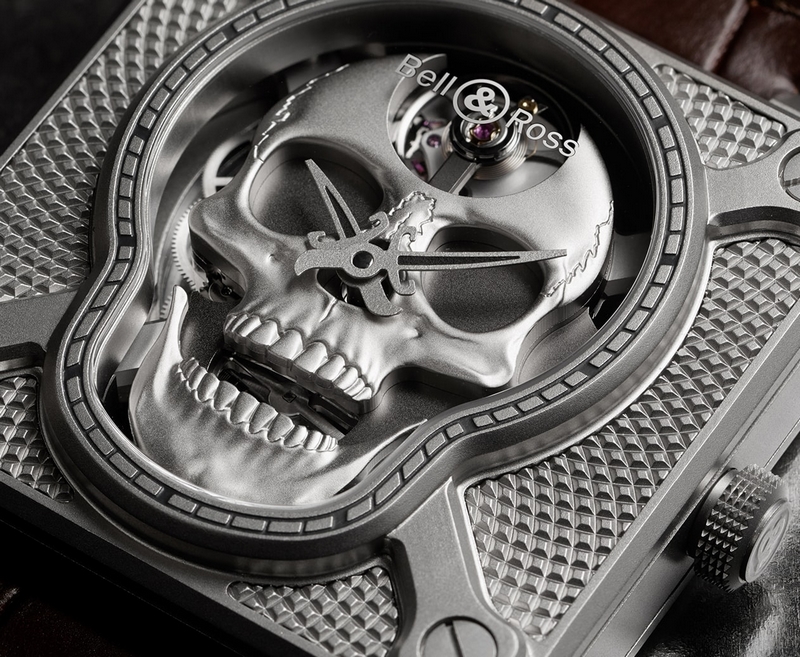 Bell & Ross is going one step further with a new Skull watch, this time equipped with an automaton movement. It includes a surprise that will make you laugh: the mandible moves and the skull grins back at you!

Naturally, the skull on the dial is the key feature of this watch. It has been made from metal appliqué, which has been embossed to create a relief pattern. This process is usually used to mint coins or make medals. As an added bonus, the skeleton work gives the impression that the skull is floating weightless in the center of the case. The sword-shaped hands are similar to those on the earlier Skull collections, but on this model they are skeletonized and coated in SuperLuminova.

Launched in 2009, the Bell & Ross BR 01 “Skull” timepiece was one of the first to ride the wave of the trend for Skull watches. On the back of this success, Bell & Ross revealed two new limited edition models in 2011, including the famous BR01 Tourbillon Skull watch. A third revisited series was released in 2015. This collection adopted a bronze case, which would develop a patina over time, transforming each watch into a unique piece.

In 2016, Bell & Ross showed innovation with its BR01 Burning Skull concept that featured an engraved case decorated with black lacquer, reminiscent of the ink used by tattoo artists. 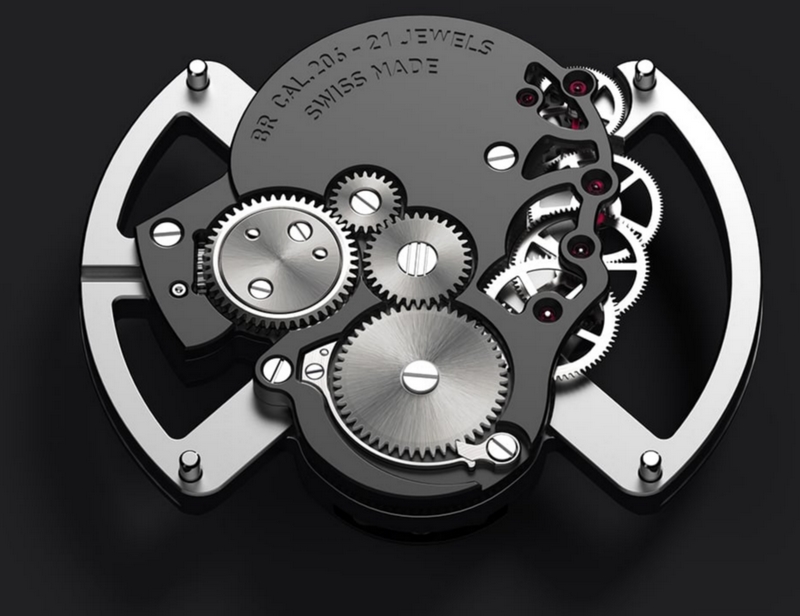 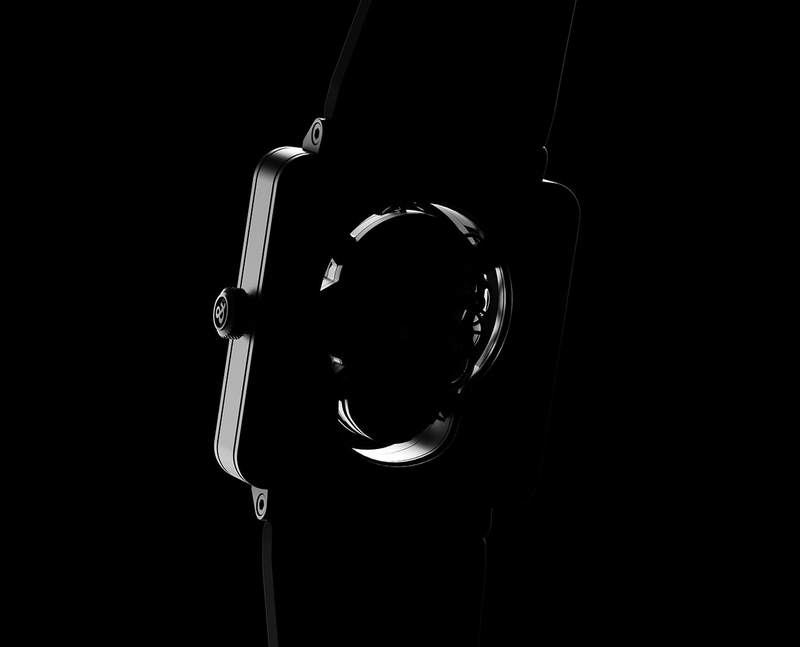 With its new BR 01 Laughing Skull watch, Bell & Ross is venturing into the field of automata for the first time.

These autonomous mechanisms, which feature an animated display, appeared in Europe in the 14th century at the same time as mechanical clocks. They often take the form of a Jaquemart, an animated mechanized figure of a person, fitted to a church clock tower to strike the hours on a bell. The original Laughing Skull concept is therefore a kind of direct descendant of these elegant animation systems.

The skull’s mandible is animated during winding.

To create it, the brand developed a caliber entirely produced by the manufacture that is also skull-shaped, so that the mechanism fits the case perfectly. In the extension of the 4 bones, the 4 bridges secure the main plate to the case and come together to form a single assembly floating in the center of the watch

The 46- mm case is decorated with a “Clous de Paris” finish. This type of guilloché pattern requires special machining. 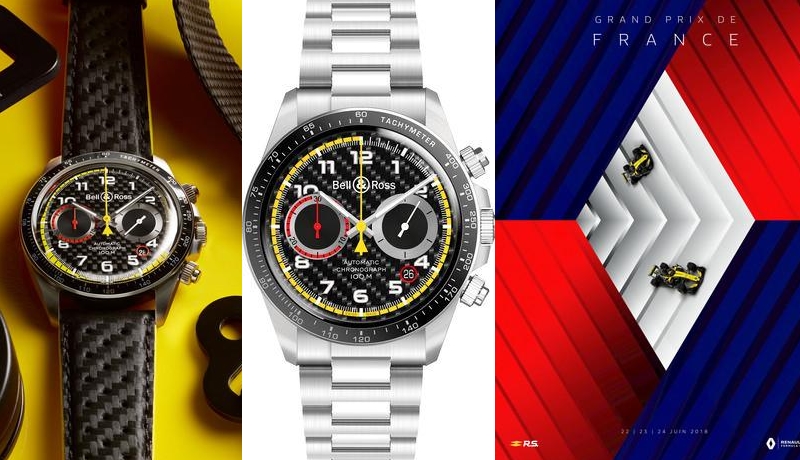 Last month, Bell & Ross, the official watch partner of the Renault Sport Formula One Team, celebrated reopening the French Grand Prix with its first presentation of a Vintage model from the collections linked to the partnership. To mark the return of Formula 1 to France, the BR V2-94 R.S.18 watch featured a black rubber strap stamped with the French  flag during the French Grand Prix.

The watch is an invitation to get behind the wheel of a racing car and experience the extreme sensation felt by the driver, for whom a watch is not only a tool, but also an ally at each and every moment of the race. This Vintage BR V2 -94 R.S.18 model immerses us in the world of motor racing adoption Formula 1 racing codes. It features a 41 mm case in satin-finished steel, a carbon fiber dial (a highly-prized material in the world of high-end motoring) and black and yellow in reference to the colors of the renaultsport Formula One Team. 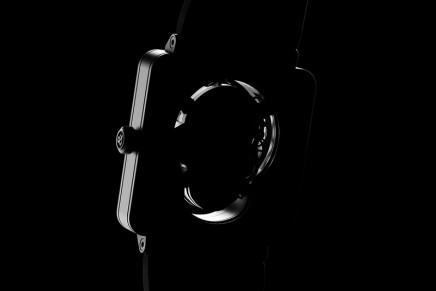 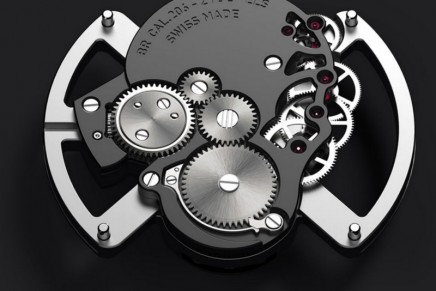 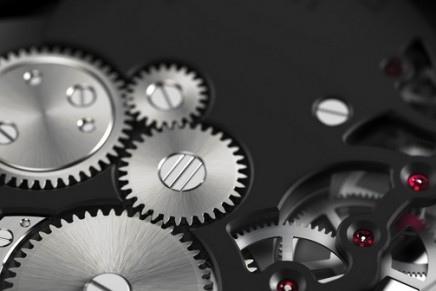 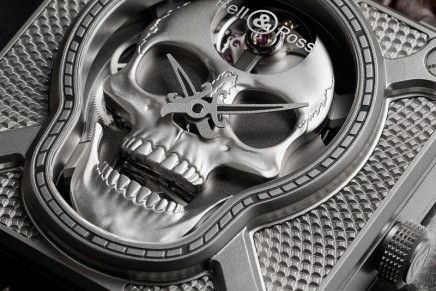 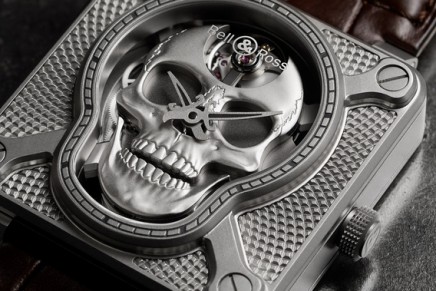 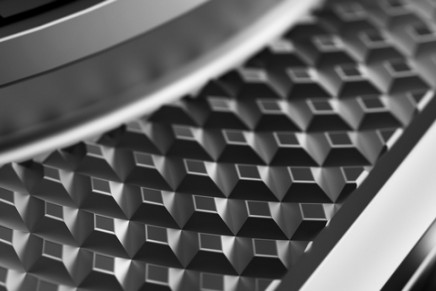 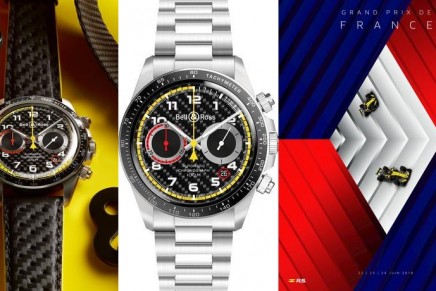