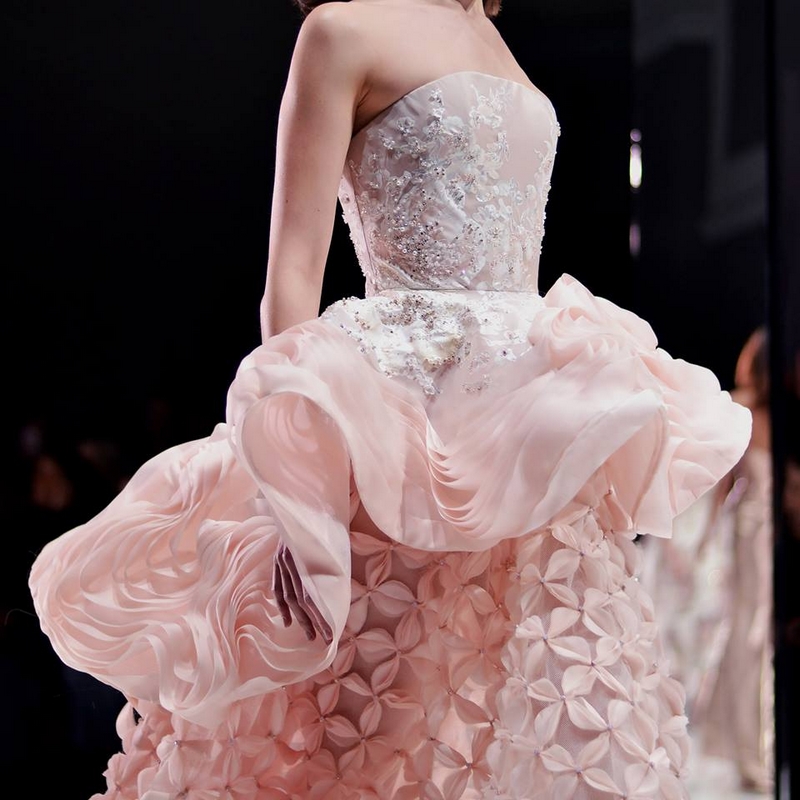 This article titled “Lifting the veil: who will design Meghan Markle’s wedding dress?” was written by Jess Cartner-Morley, for The Guardian on Wednesday 25th April 2018 11.30 UTC

The London-based label designed by thirtysomething Australian couple Tamara Ralph and Michael Russo is the odds-on favourite. Britain’s only haute couture house would be a patriotic choice with a full-service couture atelier handily situated close to Markle’s Kensington home. What’s more, the aesthetic – think superyacht glamour – has the requisite scale for the cathedral proportions of St George’s Chapel. January’s haute couture show closed with a wedding dress in double-faced duchess satin with a draped sweetheart bodice embroidered with Swarovski jewelled leaves, grand flounced skirt with pearlescent micro beads and scalloped lace veil. A semi-sheer black gown by Ralph & Russo was the most eyecatching look in the couple’s portfolio of engagement photos. A “well-placed source” has apparently been briefing the press from the atelier that there is “talk of lace”, possibly the least revealing revelation in bridal fashion history. The duo have “declined to comment”.

The woke choice. The strongest statement Markle could make would be to emphasise ethics with a sustainable, ethically sourced and made gown by Stella McCartney. When I interviewed her last week, McCartney definitely did not deny being The One. (On the other hand, having your name on lists like this one is good PR, so why deny it, even if the phone never rang?) Markle has worn Stella McCartney several times, including the caped gown she chose for the Queen’s birthday party at the weekend. Plus, the McCartneys are, in a way, British royalty. But while McCartney has made wedding dresses, including a corsetted gown with a long train for Madonna’s Scottish castle wedding in 2000, she is not really known for frills or romance. Her sleek, streamlined aesthetic is a more natural fit for Markle’s everyday wardrobe than for a wedding day. Very possibly a contender for a slinky gown for the evening reception.

A persistent outlying rumour links Christopher Bailey, the outgoing Burberry designer, with the wedding dress. Bailey has a longstanding relationship with Markle, having dressed her character on Suits. “I wear a lot of Burberry on the show because Rachel’s whole aesthetic is someone who comes from money and has a real classic design sensibility,” Markle has said. Points in favour: Burberry is a marquee name of British fashion; the fashion industry would be utterly charmed by a royal swansong for the universally liked Bailey; he is a discreet, mature character who could handle the palace and be trusted to keep a secret. Burberry is known for trenchcoats, not fairytale glamour gowns, but Lily James’s inky red-carpet showstopper at February’s Baftas was by Burberry. So you never know.

Backstage after Erdem’s most recent London fashion week show, he explained that his inspiration this season was Adele Astaire, Fred Astaire’s sister, who married into the British aristocracy. Later that day, at a fashion week reception at Buckingham Palace, his long-term client the Duchess of Cambridge made a beeline across the room for a chat. So I did ask, obviously, but he just giggled and raised his eyebrows. Make of that what you will. Erdem has Canadian connections in common with Markle, who lived in Toronto for six years. She has also worn Erdem’s clothes for years, choosing a printed maxi-dress for a wedding she attended with Harry in Jamaica last year. The recent expansion of Erdem’s small London team has added fuel to this fire. Aesthetically, this would be the most fashion-forward choice. Last year, he took the young Queen Elizabeth’s meeting with Duke Ellington at a jazz club as a starting point for a catwalk collection of rewired, quirky royal glamour. A charteuse silk gown with a tulip shaped skirt featured dense black embroidery and three outsize red silk bows at the breastbone, worn with flat mules and a quiff.

Two words: Norman Hartnell. The logic against Sarah Burton creating a spectacular Alexander McQueen gown for the royal wedding is that Burton created a spectacular Alexander McQueen gown for the last royal wedding seven years ago. But history shows that this does not rule Burton out. Norman Hartnell designed the Queen’s wedding dress in 1947, and her sister Margaret’s in 1960. A second dress commission would strengthen the ties between the royal family and Alexander McQueen, perhaps the most iconic British fashion label of modern times. The royal family set a lot of store by trust, and Burton did an exemplary job both of designing the dress and of not breathing so much as a word about it. The “Fab Four” of William and Kate plus Harry and Meghan is a compelling new framing of the royals, and this would give it an elegant symmetry.