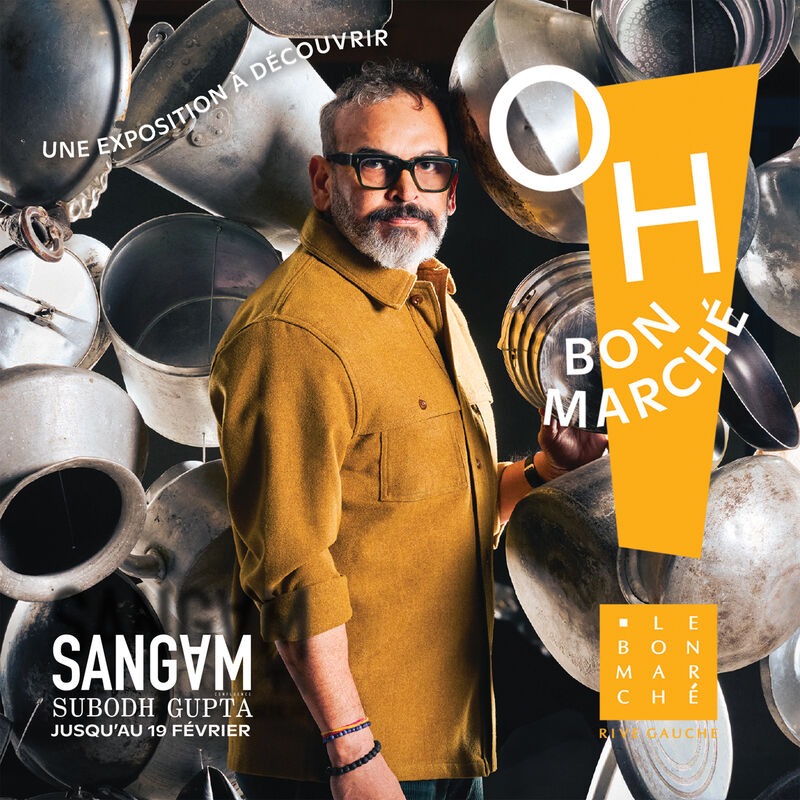 Sangam, which means ‘confluence’ in Hindi, refers to the confluence of three rivers, the Ganges, the Yamuna and the Saraswati. It is also the title of a new exhibition at Le Bon Marché Rive Gauche. Continuing its longstanding support for the arts and culture, the iconic luxury department store in Paris is once again featuring a major contemporary artist. Following the fabulous world of Ai Weiwei, Simone by Joana Vasconcelos, Prune Nourry’s The Erogenous Amazone and others, Subodh Gupta delights visitors with a captivating dialogue between cooking utensils and art.

A native of Bihar and a major figure in contemporary art, Subodh Gupta is the eighth guest artist invited for Le Bon Marché’s “January Carte Blanche” event. He draws inspiration from his Indian origins and childhood, and the intimate relationship he feels with cooking objects. Pots, pans and utensils become the instruments with which he crafts works that encompass multiple narrative levels. 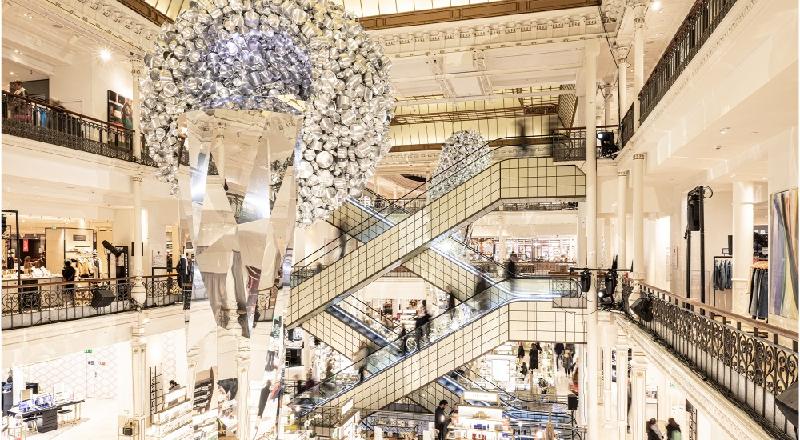 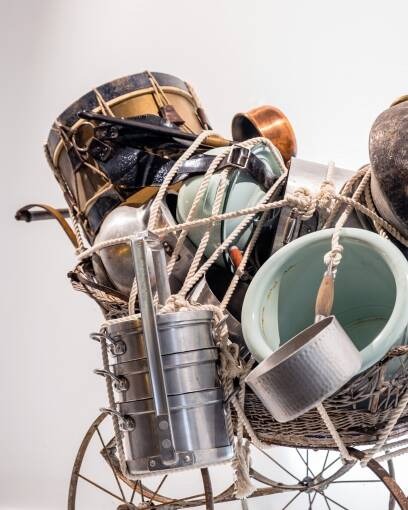 “Sangam is a cascade of mirror facets and sculptures made of domestic objects. It is an installation that questions the audience on their pilgrimage in a society focused on consumption,” explains Subodh Gupta. The work creates an opportunity for everyone to question the confluence at which they find themselves. The artist sees the renowned Parisian department store as the perfect setting to welcome this idea: “Le Bon Marché is where people from all over the world meet, encounter each other and form a human river.”

The Sangam exhibition spans emblematic spaces throughout the luxury store.

Installations are presented in ten window displays on the Rue de Sèvres, where a series of ten ‘Stitching the Code’ works comprises vintage objects and furniture bound together by cords, echoing French culture and the artist’s fondness for reappropriating ordinary objects. Two monumental installations have been set up under the glass roofs. Sangam I is a traditional Indian pot, while Sangam II is a giant bucket shaped from shiny aluminum cooking utensils. The exhibition space on the second floor features ‘The Proust Effect’, a suspended hut where a ‘making of’’ film is projected at the exit, inviting visitors to continue their experience with a deeper understanding. 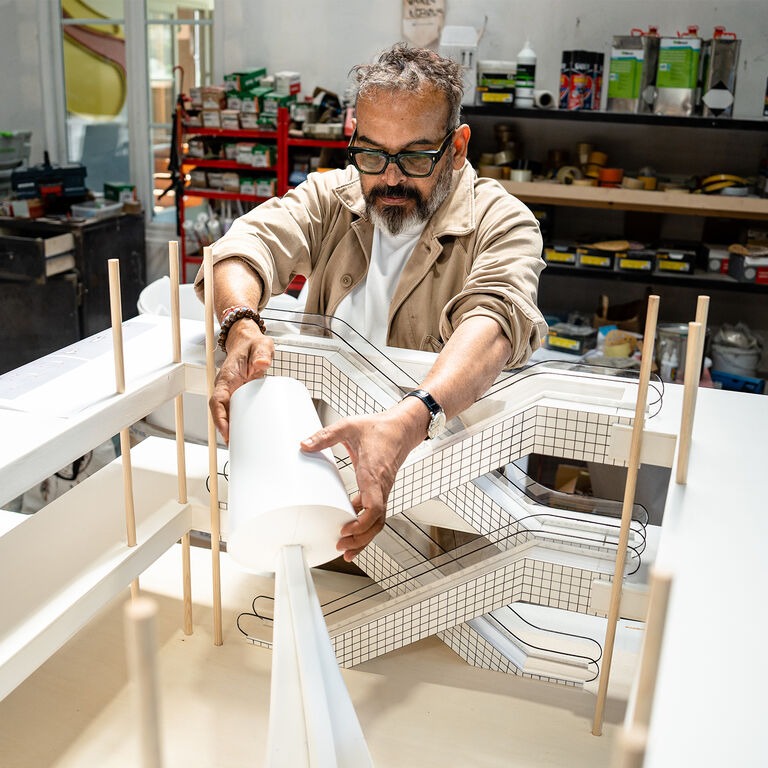 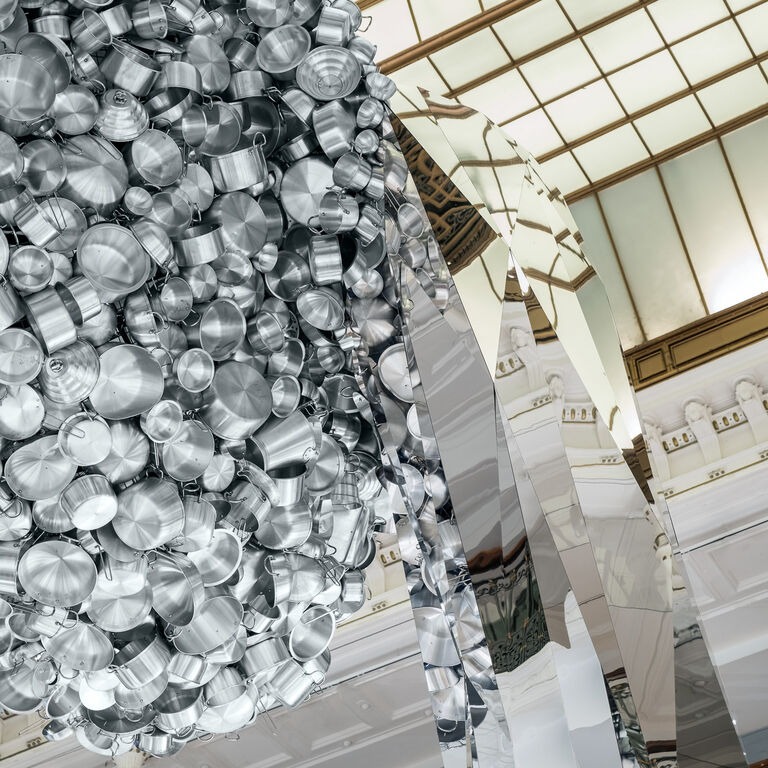 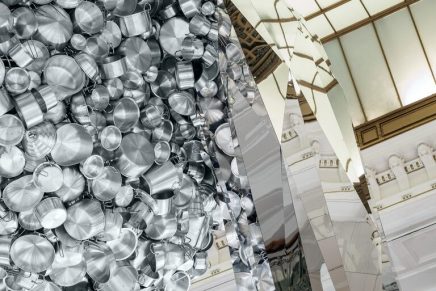 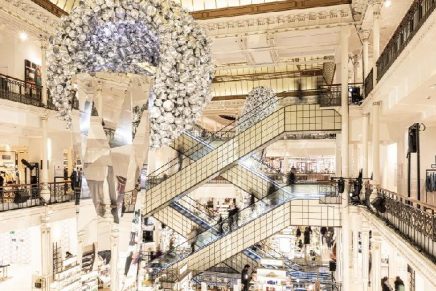 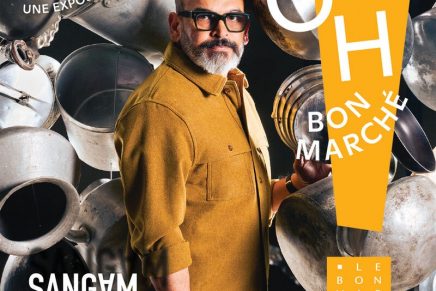 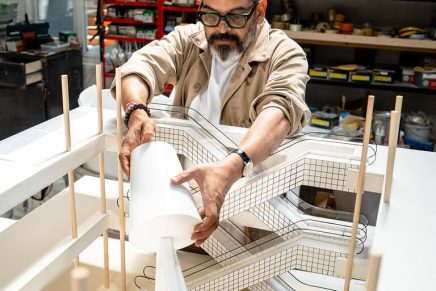