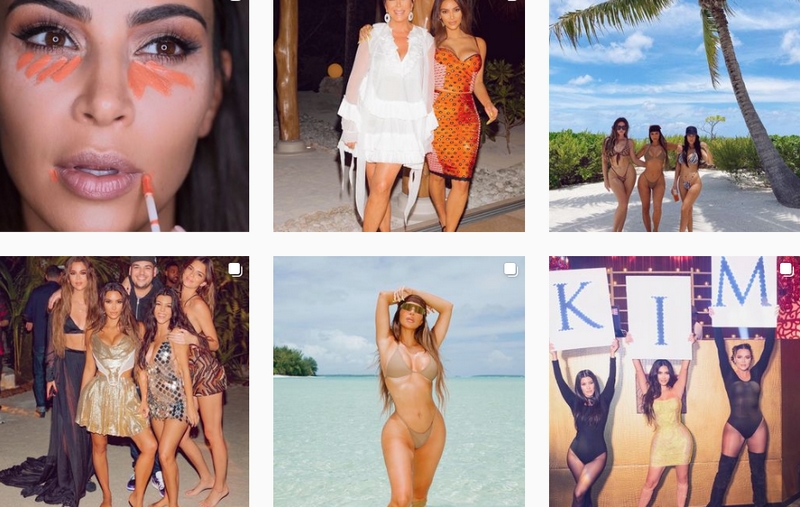 This article titled “Kim Kardashian is having a luxurious lockdown. Why are people so surprised?” was written by Niloufar Haidari, for theguardian.com on Thursday 29th October 2020 13.29 UTC

“After two weeks of multiple health screens and asking everyone to quarantine, I surprised my closest inner circle with a trip to a private island where we could pretend things were normal just for a brief moment in time,” wrote entrepreneur, mother of four, archetypal Libra and newly 40-year-old Kim Kardashian West under her Instagram post yesterday, as she shared footage from her exclusive and intimate island birthday party. It was a textbook offering of the luxury lifestyle content that has earned Kim K 190 million followers.

“I realise that for most people, this is something that is so far out of reach right now, so in moments like these, I am humbly reminded of how privileged my life is,” she added, so that we – the peasants faced with four months of patio heaters and 4pm sunsets – knew that she was very special and lucky. I looked at the hideous gold dress she had chosen to wear for the occasion, and made a reminder to myself to research Sad lamps.

Predictably, in the outpouring of social media reaction, most commentary has fallen into two broad camps: the first is outrage at Kim’s selfishness, often regrettably suffixed by wishing coronavirus on her family and everyone who attended, while the second was to parody the somewhat tasteless post through memes. Much as I would love to, I’m not allowed to tell other people how to feel about things, so fine: you can be angry and horrified and annoyed, and send her tweets about how you haven’t hugged your gran since March if you want to, but at this point I’m a bit suspicious of anyone who is surprised.

I don’t know why it’s taken Covid-19 for some people to realise this, but the super-rich simply do not live on the same planet as the rest of us. Much has been written about the virus being “the great equaliser” – indeed for Madonna, it wasn’t enough to write it, she had to muse it aloud from a petal-strewn bathtub – about how we’re all in the same boat now, rich and poor, cooped up inside knitting or baking bread or going mad or whatever. But we are obviously not all in the same boat, any more than we are all spending quarantine being served cocktails in J-Lo’s back garden.

We know now that Covid has deepened long-term social inequalities, and thanks to Instagram we also know that most of us have spent 2020 wasting away in shared spaces smaller than Stormi Jenner’s life-sized playhouse. To paraphrase a popular line from English literature: all lockdowns are equal, but some lockdowns are more equal than others.

Justin and Hailey Bieber grappled with this knowledge while on Instagram Live with close friend Kendall Jenner, who conceded that they were indeed “so blessed”. Arnold Schwarzenegger did his bit, advising us all to “stay at home” while smoking a cigar in his hot tub.

People who are mad about Kim K forcibly quarantining her 50 nearest and dearest for two weeks so that they could celebrate her birthday (undeniably hilarious and also classic Kim) are fundamentally missing the point about both Kim Kardashian and celebrity itself. Kardashian, her entire family, and anyone else who shares a tax bracket with her, are delusional. They simply do not understand the real world, and what happens in it, or how normal people live.

Why would they? Even the earliest episodes of Keeping Up With the Kardashians (KUWTK) – before the disputed billionaire statuses, 100 million-follower accounts and sold out lip-kits – showed us a close-knit, wealthy family sheltered from many of the hardships and realities of life. That Kim K has now discovered enough awareness to even refer to her “privilege” could indicate some lockdown-induced personal growth and reflection – but then maybe it’s just the latest magical piece of PR. Of course, this awareness does nothing to help anyone, but then empty acknowledgements of privilege without any attempts to address it have become de rigeur recently.

Maybe Kim’s mistake wasn’t having the private island party, or even sharing tone-deaf photos of it with us, but attempting to relate to us. If the super-rich have taken nothing else away from the pandemic, they should by now have realised that their attempts at inclusive “we’re all in this together” relatability are always a bad idea. Kim beneficently “realising” that “for most people, this is something that is so far out of reach right now” – as if swimming with whales and having movie screenings on a private island are things we are only currently unable to do because of Covid – is obviously incredibly out of touch, but when has she ever been anything else? Are there people among us watching KUWTK or following the sprawling moneyed family on social media for their humility and astute observations about life as an every(wo)man?

Laugh at the absurdity of Kim’s post, or rage at the fact that we live in a world in which a tiny sliver of the population can effectively shield themselves from this “great equaliser” of a virus while many of us have lost jobs, loved ones, and our freedom – but please, please, stop being surprised. If you thought Kim Kardashian – one of the most iconic and successful narcissists of all time – was going to let something as small as a global pandemic ruin an opportunity for an extravagant birthday party, then you need to be paying more attention. Or maybe less? As a wise Kardashian once said: “Kim, there’s people that are dying.”

• Niloufar Haidari is a freelance writer from London who has written for Vice, Vogue and Crack Magazine