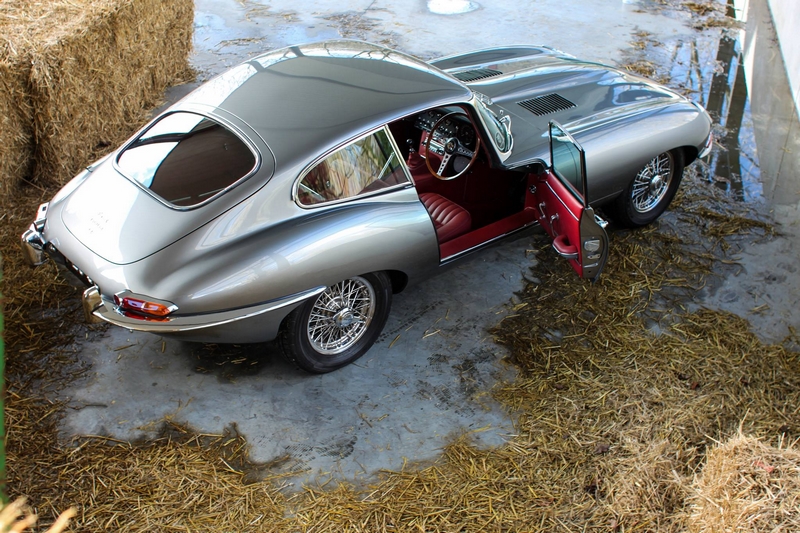 This article titled “Jaguar E-Type: ‘It tops out at a Brylcreem-ruffling 146mph’” was written by Martin Love, for The Observer on Sunday 15th April 2018 05.00 UTC

In the ever-evolving game of Top Trumps which shuffles in my head, there has been one car in poll position for as long as I can remember. But stating that the Jaguar E-Type is the most outrageously stunning car of all time has a lot of the pope/catholic/bears/wood obviousness about it. Even Enzo Ferrari declared it was “The most beautiful car ever made.” It is the ne plus ultra of charismatic classics and its story has become part of automotive folklore. When the silken drapes were pulled from its polished bodywork at the 1961 Geneva motor show, it ushered in an era of unprecedented automotive glamour. It was the car the 60s deserved. Now, almost 60 years later, the detail of Malcolm Sayer’s exquisite original design still has the power to stop you in your tracks.

But admiring an icon from afar is very different from easing into its leather seat and feeling the steel-studded wooden steering-wheel slip beneath your sweating palms. A few years ago I had the chance to drive the very last E-Type ever made. It was built in June 1974 and was the 72,529th vehicle to roll off the production line. Painted black and carrying a facsimile of the signature of Sir William Lyons, Jaguar’s founder, its number plate was HDU 555N. It was a two-seater with a Brylcreem-ruffling top speed of 146mph. It would have cost £3,182. But it was never sold. Instead it became a museum piece from the moment its last nut was tightened, rolling straight from the factory into Jaguar’s own historic collection.

My moment of glory came on the track at Millbrook. Mike, part of a dedicated team who look after Jaguar’s heritage fleet, sat in the passenger seat, unimpressed. “Don’t be shy,” he said, as I gingerly edged the car out of the pits. “Give it some.” So many classics are a bit of a nightmare to drive (though, of course, that is also part of their appeal). With its endless bonnet, you’d think the E-Type would be right up there with the Morgan as a miserable drive. But… Oh my. The gearstick did take a bit of wrangling, but once out on the straight – and with my right foot pressing down to the floor and the 5.3-litre V12 engine burbling like a turbo-charged Jacuzzi – the ride was intoxicating. As I relaxed into it, so Mike eased a sigh of relief, and Jaguar’s most famous big cat stretched out and unsheathed its claws.

One of the wonders of the E-Type was that so many were made in its short 13-year production span and almost all of the cars that still exist are now in the hands of enthusiasts. However, some still do come up for sale. The one pictured here is being offered by the specialists E-Type UK. It’s a Series 1 4.2-litre two-seater which started life in California in 1967. It’s had a raft of upgrades to make it suitable for modern driving in Britain and will cost you about £145,000. Clearly that is way beyond the means of most mortals, but a track day experience in one of the gods of the motoring world starts at less than £90. A bargain for a glimpse of heaven on earth…