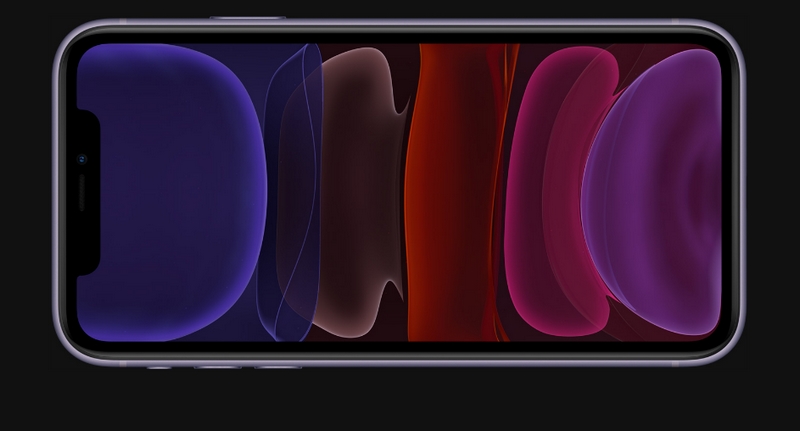 The iPhone 11 is Apple’s latest lower cost smartphone for 2019 that’s clearly aimed at a broader market, offering most of what its top phones do but for £320 less.

Costing from £729, the iPhone 11 is also £20 cheaper than last year’s iPhone XR was on launch – the phone it has now replaced.

In fact the iPhone 11 is identical on the outside to the iPhone XR in almost all the ways that matter. It’s the same size and weight. It’s got the same glass and aluminium design, same 6.1in LCD screen with rounded corners, the same large notch at the top and same thick bezels around the sides.

Flip it over and it’s got the same glass rear, except that “iPhone” is no longer written on the back and the Apple logo is positioned lower. The biggest difference is the new large, square camera lump in the top left corner, which on the iPhone 11 houses a new dual camera system.

The phone is well built, feeling extremely solid and it has the best LCD screen you’re likely to see on a phone although it isn’t as good-looking, colour rich, bright or high contrast as the OLED screens fitted to the iPhone 11 Pro or Apple’s many rivals costing £500 and up.

The iPhone 11 also suffers from the same disadvantages as the iPhone XR before it, namely it’s fairly heavy and wide with rounded edges that provide little in the way of grip. Compared to Samsung’s Galaxy S10, which has the same size 6.1in screen, the iPhone 11 is 5.3mm wider and 37g heavier and significantly harder to use one-handed.

The iPhone 11 shares the same core as the iPhone 11 Pro and Pro Max: Apple’s latest A13 Bionic chip, 4GB of RAM and at least 64GB of storage. It’s the fastest and most efficient of Apple’s chips yet, but the reality is that it’s very difficult to tell. The iPhone 11 doesn’t feel any faster than last year’s iPhone XR/XS, or in fact the iPhone X in day-to-day usage.

That’s not surprising as Apple focuses its chips on doing the things you’d normally do more efficiently, with power to do something unusual if you need it. That means the iPhone 11 should still be a top-performer in two, three, maybe four years from now. So really the only thing you need to know is that the iPhone 11 will handle everything you are likely to do, and then some.

Apple also says that it’s managed to make the iPhone 11 last an hour longer than the iPhone XR, which lasted 32 hours between charges in my testing.

I’m happy to report that’s a bit of an underestimate. The iPhone 11 lasts closer to 35 hours between charges, which makes it the longest-lasting iPhone to have crossed my test bench, getting me from 7am though until 6pm the following day.

That was after the iOS 13.1.1 update, while using it as my primary device without a smartwatch attached, sending and receiving 150 emails and messages, 80 push notifications, listening to five hours of music on Bluetooth headphones, watching an hour of Netflix, and shooting about 10 photos a day.

Charging the iPhone 11 with the included 5W charger is glacially slow, taking well over four hours to hit 100% from zero. Why Apple still ships a £729 phone with such a pathetic charger, I don’t know. With the £29 18W USB-C charger and £19 USB-C to Lightning cable that ships in the box with the iPhone 11 Pro, the iPhone 11 fully charged in just over 100 minutes, reaching 80% in well under and hour, which is more like it. Any USB-C power delivery chargers of 18W or higher will achieve the same results and can be had for one-third less.

It’s also worth noting that iOS 13 includes a battery optimising feature, which is designed to learn your habits and only charge the battery past 80% when it thinks you need it to extend its longevity. Apple is also clearly slowing charging down to a trickle above 95% regardless of charger, meaning that it’s probably not worth trying to charge it much beyond 90% if you don’t need to.

The iPhone 11 came out of the box with iOS 13 but was quickly updated to iOS 13.1 and then iOS 13.1.1, which was a good thing, as prior to the updates it was filled with bugs giving me all kinds of issues on three different iPhone 11 series phones.

First off, the camera confirmation for restoring it from another iPhone didn’t work. Then I was immediately stuck in a password-demand loop for an email account, which ended up with me having to hit the cancel button and then quickly enter one character of my 35-character password before the password demand popped back up blocking me from entering more. Hit cancel, rinse and repeat. Absolutely infuriating.

I had issues with location permissions getting stuck on “ask every time” for some apps. I also had several hard lockups of the phone prompting the three-button combo force restart procedure (up, down, hold power for ages), text in widgets and other areas was compressed and overlapping each other, and sometimes the camera failed to activate when launched.

Most of the problems have been solved since the update to iOS 13.1.1, and it even added an extra hour to my battery tests.

The big new features for iOS 13 are dark mode, which turns the interface from a predominately black text on white background to white text on a dark background, either manually or on a schedule.

You can now also long-press on control centre buttons such as Bluetooth or wifi, first to open a up more detail, then a second time to open up a quick connect menu as well as a button to take you straight to the appropriate place in the settings app for more extensive changes. It is a user-friendly feature that Android has had for years, so it’s good to finally see Apple catch up.

A few new privacy options are welcome, including the ability to silence unknown and spam callers and finer-grain location permissions. Menstrual cycle tracking is now integrated into the Health app alongside headphone audio level, and there’s a new summary view, which makes the app more friendly and useful at a glance.

It’s worth pointing out that Apple still provides the industry’s longest software support lifecycle of about five years from release where the best rivals cap out at about three years. It means you can safely use the phone for longer as you will continue to get important security updates as well as new features via iOS version updates.

The iPhone 11 has a new dual 12-megapixel camera on the back. Oddly you get an ultra-wide camera alongside a standard camera, not the more typical 2x optical zoom camera. That means you’ve effectively got 0.5x and 1x optical zoom then up to 5x digital zoom, which is good, but doesn’t hold a flame to real optical zoom.

Apple has significantly upped its game in the camera department this year, particularly in poor lighting conditions. Photos in good lighting conditions are some of the best on a smartphone, producing detail-rich and colour-accurate photos. The main camera is good, but the ultrawide is arguably the best in its class and is a lot of fun to shoot with.

Other than your typical ultra-wide vistas, you can also use the new camera to photograph more of a building or object you can’t get far enough away from to use the main camera.

Portrait mode is good too, and unlike on the XR can be used on more than just people. Apple’s smart HDR mode is also improved, producing images that are closer to class-leading Google Pixel cameras. But the biggest boost is Apple’s new night mode, which finally brings the iPhone’s very low-light performance up to scratch with the very best.

It’s not as fast as Huawei’s P30 Pro, which doesn’t need a special night mode to shoot similar photos, nor quite as dramatic as Google’s Pixel 3, but produces images that are often lighter and better controlled.

The automatic mode takes multiple frames between one and three seconds when handheld, depending on available light and how much you are shaking the phone. Stick it on a tripod and you can set it to 30 seconds, which is best illustrated with starry sky shots – something I couldn’t test in dank, rainy Britain.

The iPhone still struggles a little with indoor lighting where it’s not quite dark enough to benefit from night mode so produces images that are a little dark and lacking in detail. The selfie camera in particular produces somewhat grainy images here, but shoots great photos in better lighting conditions.

Video capture from the rear camera is fantastic, and easy to use, arguably better than rivals. The front-facing camera can also offers slow-motion selfies, which kids will love.

Overall the camera on the iPhone 11 is a big step up, equalling or exceeding rivals from the first half of 2019 in the most important features, although the lack of an optical zoom is disappointing.

The iPhone 11 is an excellent but boring smartphone. It’s got a three-year-old design, which Apple broke the mould with in 2017 when it launched the iPhone X but now looks dated against the competition, particularly with the thicker bezels on the LCD screen. Things have moved on in the era of the all-screen smartphone.

It’s fairly large, heavy and difficult to grip and use with one hand, but is also extremely well made and feels solid. These are all attributes shared by its predecessor the iPhone XR, as the iPhone 11 is essentially new guts in last year’s design.

At £729 the iPhone 11 isn’t exactly cheap, costing the same as the top-of-the-line phones from competitors. But what you get for your £729 is Apple’s latest top-of-the-range processor with performance to match. Battery life that will easily see you into a second day, maybe a third if you’re careful. Camera performance that is up there with the very best, but lacking an optical zoom, replaced instead by a fun ultra-wide angle camera.

You also get five years of software updates, which can’t be sniffed at. With a battery swap at some point there’s no reason an iPhone 11 won’t last you five years if you’re careful with it. In some tests the glass appears fairly tough to break, but less so in others, so whether it will survive real-world drops remains to be seen.

So the iPhone 11 is the iPhone for people who don’t really care about smartphones and just want a new iPhone. Except that it’s not that simple. Apple still sells the iPhone XR, which is essentially the same phone minus a second camera and one year less of software support, which is still at least four years, for £100 less at £629. And then there’s the iPhone 11 Pro and Pro Max, which have a third camera, a significantly better screen and the cachet of being “the best iPhone”.

Cons: no headphone socket, no fingerprint scanner, dated design, expensive, no fast charger or USB-C cable in the box, no headphones adapter in the box