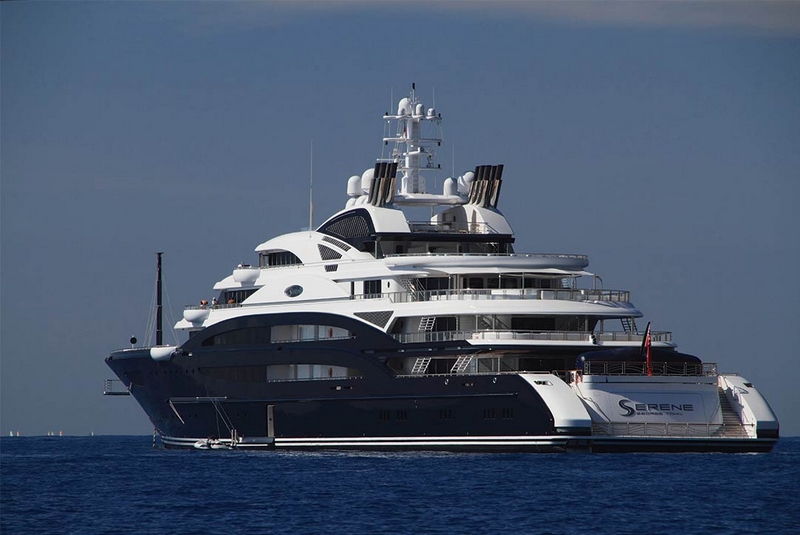 The story of the largest yacht ever sold is a complicated one, involving a Russian billionaire, a Saudi Royal, and many hundreds of millions changing hands between the two. The 134-metre Serene was the first superyacht ever built by the renowned Italian shipyard Fincantieri. Prior to the yacht’s construction, it was a shipyard known more for large commercial ships. Perhaps this is what accounts for the enormous size of the yacht, which has amenities ranging from a salt-water swimming pool to a supersized hot tub and, of course, a fully operational helipad.

The construction of Serene was funded by the Russian oligarch Yuri Scheffler and delivered to him in 2011. As was later revealed, the billionaire has since sold it on to Saudi Arabia’s deputy crown prince, Mohammad bin Salman. The royal spent $458 million acquiring the yacht, which was the largest ever produced in Italy. With her giant size and exterior lines drawn by Espen Oeino, the yacht is unmistakable to all who encounter her.

But the story gets a little more complicated – and a little shadier – than that. Following the sale to Mohammad bin Salman, Scheffler ultimately sued Fincantieri. The reason was another superyacht; the massive Ocean Victory, built by Fincantieri on the same shipyard for another Russian oligarch, namely the billionaire Viktor Rashnikov. Following its construction, Scheffler claimed that the second yacht infringed upon his intellectual property on the grounds that it was built on the same platform as his Serene. Scheffler won and claimed €20.9 million in damages.

But the story doesn’t end there. It is unclear how much Scheffler actually spent funding the construction of Serene at Fincantieri, but it is widely believed that it was sold to bin Salman at a profit. Information gleaned from the leaked “Paradise Papers” revealed that the yacht was sold to the deputy crown prince for €420 million. Around the time of the sale, it was reported in the media that the deal had been closed very quickly, even to the point of bin Salman asking Scheffler to vacate the yacht within hours of the purchase. The paradise papers, however, tell a different story.
According to information released via the leak, the sale took ten days to close, and, suspiciously, Serene had to sail out into international waters before she could change hands. In this wild tale of massive profits, complicated deals, lawsuits, and superyachts, much remains unclear about what exactly went down as this yacht was built and sold between such powerful men.

One thing is clear though: the yacht would not be worth anything like the almighty fuss that has ensued were it not a world-leader in design and luxury. This is no small seagoing pleasure craft kitted out with a handful of amenities, a toilet, and a fire extinguisher for boats in the cabin. This is a superyacht of the first order, the kind that takes a team of staff to run and a host of guests to enjoy. This is a yacht as unmistakable as the convoluted tale of its construction, purchase, and sale. Let us take a look inside.

Serene has six decks, stretched over a beam 18.5 metres long. Such dimensions are all but necessary to accommodate the wealth of amenities and other features found on board. The yacht is composed of a steel hull and an aluminium superstructure; the decking is teak. The 18.5 metre beam is crossed with a draft of 5.5.m Serene provides full luxury accommodation for 24 guests across 12 cabins and requires a crew of 52 to man the vessel at all times. Naturally, it is a motor yacht, no sails could power along a vessel this size, and it is propelled by a twin screw mechanism. With a diesel engine, the yacht has a maximum speed of 17 knots and typically cruises at 15 knots.
Much has been made of Serene’s exterior design, which is the work of world-renowned designer Espen Oeino who is based in Monaco and frequently designs striking yachts for the world’s super-wealthy. The interior design is the work of British design studio Reymond Langton and incorporates and sophisticated combination of light and dark – typically cream and brown – with tastefully positioned wooden fixtures.

For all its obvious beauty, the real attraction of Serene is the astonishing number of luxury amenities that are spread across its six decks. Located on the aft of the sundeck is one of the ship’s most recognisable features – a supersized bathtub offering panoramic sea views takes pride of place in this location, being one of the main identifiers of this remarkable yacht.

The yacht contains seven pools, and another conspicuous feature, a jacuzzi surrounded by a sunbathing lounge, is highly noticeable on the top deck. In front of this jacuzzi is a wet bar (no doubt always fully stocked with the finest beverages) and above is an observational deck with another area for sunbathing.

Moving on to the sundeck, which is at the very top of the vessel, a spa pool can be found surrounded by the usual
sunbathing area. This pool has yet another bar, this time with barstools placed between not one but two additional jacuzzis. In the shaded area of the sun deck is a table for table dining.

Moving inside and into the beautiful Raymond Langton designed interior, one immediately notices that the entire interior has been constructed so as to offer fantastic views, out of broad windows, for every conceivable vantage point around the yacht. All of the most expensive and comfortable furniture is available inside, including broad sofas, chairs, and coffee tables for serving drinks or tea/coffee.

The décor scheme alters somewhat as we move into the main lounge, which is designed to be a slightly more formal
setting for the wining and dining of large numbers of guests at once. Here, the darker tones are prioritised, and cocktail tables are elegantly spread around a piano at the centre. This main lounge is situated over the main dining area, to which it is connected by an atrium. The main dining room is the centerpiece of the yacht’s interior and is surrounded by ceiling to floor windows; it has a broad layout that can be adapted to either seat 24 guests at individual tables or to host larger banquets in the centre.

With amenities and features stretching far beyond those described here – such as many more swimming pools, lounges, and specialist luxuries – this superyacht is the very epitome of luxury seagoing. With such a remarkable craft at the heart of it, it is no wonder that the drama surrounding its sale and construction could at times become a little fractious. 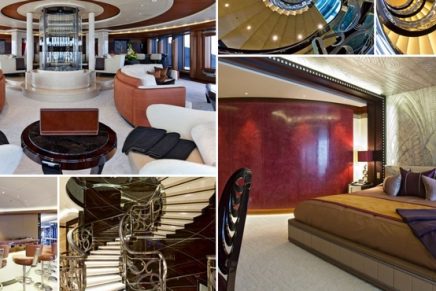 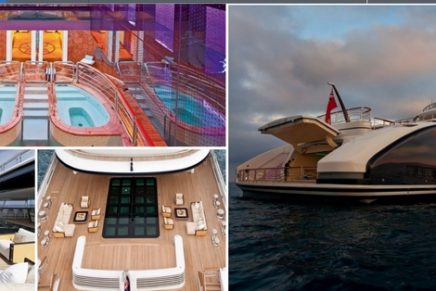 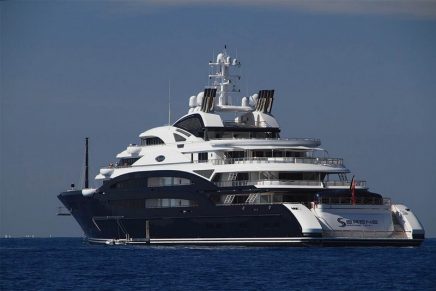