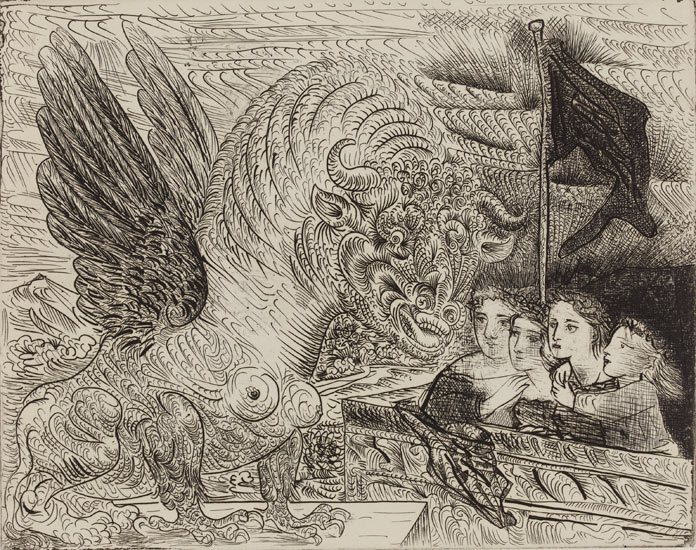 This article titled “How the Vollard Suite draws us into the dark mind of Picasso” was written by Jonathan Jones, for guardian.co.uk on Wednesday 25th April 2012 12.35 UTC

Pablo Picasso‘s greatest achievement of the 1930s was his painting Guernica – right?

Wrong. Picasso’s masterpiece of the 1930s is the Vollard Suite, a series of etchings that lay bare his imagination and his creative energy like nothing else he ever did. If every painting by Picasso were to vanish, and only this series of prints survived, his genius would still be obvious from this work alone. Guernica grows out of its imagery: in a sense (especially with its black and white palette) this famous painting is simply a translation to mural scale of the intense symbolism and mythic power of the etchings in the Vollard Suite.

A copy of this phenomenal work of art has been acquired by the British Museum and goes on display for free in its print gallery next week. This is truly one of the art events of the year, and offers more inspiration, stimulation and sheer excitement than almost any other art I can think of.

Ambroise Vollard was a gifted art dealer who had the foresight to back Cézanne in the 1890s and who also had a passion for creating artist’s books (as they are now called). Renoir, one of the artists he represented, portrayed him in a painting now in the Courtauld Gallery. It shows him contemplating a statuette, an archetypal connoisseur with a fondness for fine things. Picasso started out as a rebel, but by the time he began a suite of etchings for Vollard in 1930 he was rich and famous and nearly 50 years old. It might have seemed that he was settling into a respectable mature period, making classy, conservative prints for the luxury art market.

Nothing could be further from the truth.

In the images he etched for Vollard to publish, Picasso explores the furthest reaches of his psyche. He delves into his darkest places. It is a phantasmagoria of sex and violence. In one of the images (above), four girls with innocent faces that might have been drawn by Rossetti gaze over a parapet at an immense monster with a bull’s horned head, female breasts, wings and clawed feet. This incredible chimera is not just monstrous in outline but internally: its form is created by churning, spiralling, ornately involved black lines that seem to swarm and change before your eyes to create a truly spectral being. In fact, the previous picture shows the old master Rembrandt in a similarly grotesque style, facing a neatly drawn classical artist over a drink: Picasso is playing with, joking on, the extremes of artistic style.

That may sound a bit arty, but wait. Here is a bullfight. In a nightmare corrida, a horse raises its throat in a dying scream as it is gored by a bull in the arena. The bull, too, is injured, a spear in its side. At least, these are the details that start to emerge as you contemplate a tangled confusion of heads and limbs, a cubist chaos of flesh and death. At the heart of it all, her eyes closed, floats a woman bullfighter.

This is just one of the bullfight scenes in this amazing series. In the Vollard Suite, Picasso works out his imaginative and emotional response to bullfighting, finding in it surrealistic images of cruelty and ecstasy. This is what I mean by Guernica growing out of these prints: they are the laboratory in which his images of the horse and the bull, so powerfully used in his anti-war painting, are created and developed. This is also where he is most explicit about his sexuality and relationships with women: one section is called The Battle of Love. Yet he also creates lyrical, tranquil scenes of lovers at peace here.

Above all, the Vollard Suite is about metamorphosis – the ability to change one form, one idea, into another that is the essence of Picasso’s genius. Here, in one compact set of images, you can watch the mind of Picasso at work.

And it is quite a show.