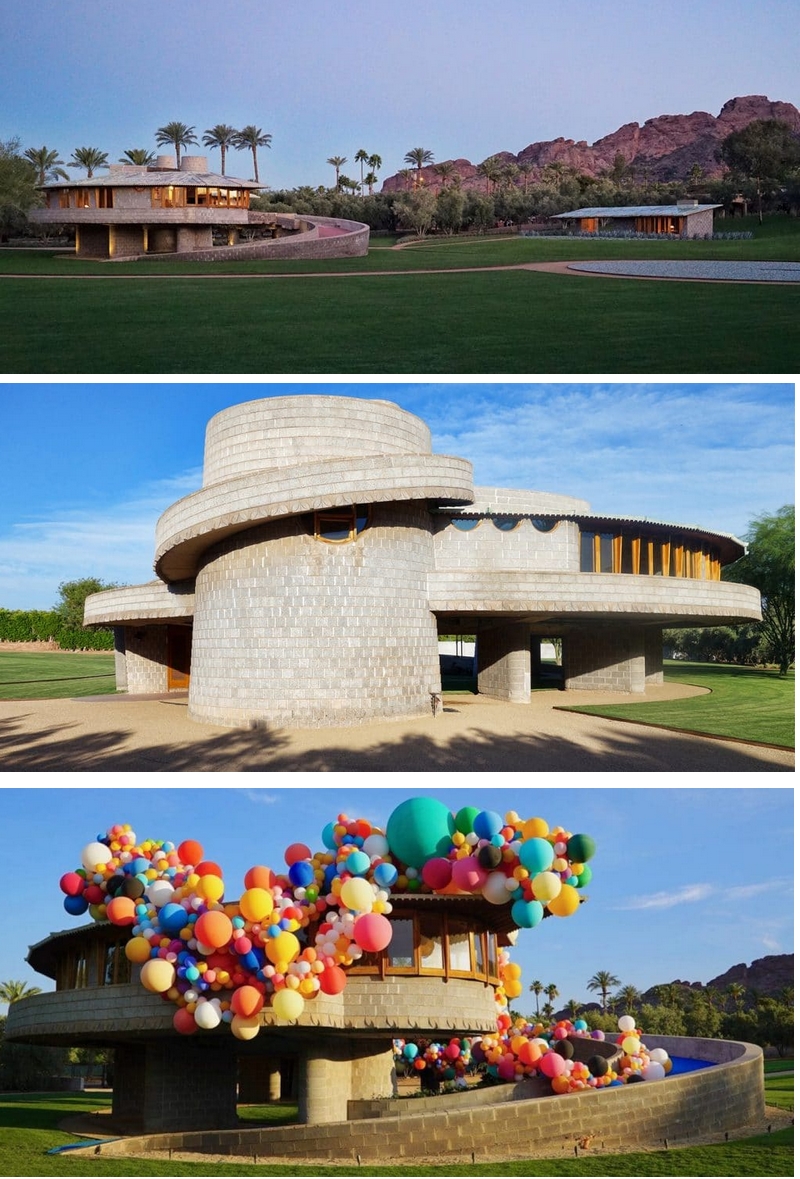 David & Gladys Wright House. Built for his son David and daughter-in-law Gladys, this Phoenix residence is one of Wright’s most innovative and unusual works of architecture. photos @franklloydwright.org/site/david-wright-house/

This article titled “Frank Lloyd Wright home in Phoenix set for new lease of life after $7.25m sale” was written by Guardian staff and agencies, for theguardian.com on Tuesday 1st September 2020 06.45 UTC

A desert home designed by Frank Lloyd Wright in Phoenix has sold for more than $7m.

Related: Doggy style: homes of the pampered pooches of Palm Springs – in pictures

The David and Gladys Wright House sold for $7.25m, the Arizona Republic noted on Monday in a paywalled report.

The group of buyers include businessman Jim Benson and architects Bing Hu and Wenchin Shi, who apprenticed at Wright’s Taliesin West architecture school and home in nearby Scottsdale.

Wright’s best-known creation is the Guggenheim museum in New York.

Russ Lyon Sotheby’s International Realty said the sale went through after the buyers said they intended to preserve and restore the house.

Bob Hassett, a Sotheby’s agent, says several offers in the last few years were rejected because the buyers only wanted to tear it down.

Built in 1952, Wright designed the home for his son and daughter-in-law. David and Gladys Wright lived on the then 10-acre property in Phoenix’s Arcadia neighborhood until they died in 1997 and 2008. Family members sold the house after Gladys Wright’s death.

A developer bought the house in 2012 with plans to tear it down. Their plans immediately drew an outcry from architects and historical-preservation advocates.

It was spared the wrecking ball when another developer bought it with the intent of preserving it.

But the new owner’s proposal to expand the home with a garden pavilion and underground museum failed to be realized, partly due to opposition from surrounding residents, and the property found itself on the auctioneer’s block in August.

The mid-century contemporary home has spectacular views of the distinctive Camelback Mountain that forms a dramatic backdrop to the Phoenix metropolitan area.

It was one of the last homes designed by Frank Lloyd Wright, who died in 1959.

Hassett said: “We had several offers over the past few years, but the buyers always wanted to only tear down the house and build all new ones.

“The sellers wanted nothing to do with those proposals, as their intention from day one when they purchased it back in 2012 was to make sure the home and its integrity would be preserved as such a historic Frank Lloyd Wright masterpiece should and will be.

“These are the perfect buyers for this property, and we are all extremely happy that we were able to put this all together.”

Azbigmedia.com reported that the buyers plan on personally restoring the Wright House including installing a new copper roof which was part of Frank Lloyd Wright’s original plan.

It was announced in January that Wright’s architecture school, with students based at Taliesin West and other locations, was to close this summer.