Did you know that you can’t use a regular pen in the space? Only Forever Pininfarina Space with Ethergraf allows you to write in space.

A space mission is in the making for Napkin and Pininfarina, which in recent years have given life to futuristic projects in the world of writing instruments. Thanks to ALTEC (the Aerospace Logistics Technology Engineering Company), the new, innovative stylus from the Forever Made in Italy line, bearing the evocative name of Forever Pininfarina Space, will accompany the crew of the International Space Station (ISS) on their mission.

The astronauts were given the stylus and during the course of their mission, which took off with the Russian rocket Soyuz on 29 July, and will continue till the end of the 2017, they will have a chance to test it and assess its potential in a unique environment, characterised by extreme conditions such as the absence of gravity.

Innovation and incessant research are the elements at the basis of the collaboration between Napkin and Pininfarina. Thus, when, in 2017, the partners sought the involvement of ALTEC, the Italian centre of excellence for the supply of engineering and logistic services in support of the operation and use of the ISS, as well as the preparation and launch of planetary exploration missions, it all seemed part of a natural evolution.

Like all the products in the Forever Made in Italy range, Space, that will begin to be marketed at the end of the mission, is characterised by its writing tip made of Ethergraf, the innovative metal alloy (patent pending) conceived and produced by Napkin drawing its inspiration from Leonardo da Vinci’s silver tip. The Ethergraf tip oxidises the paper, leaving a mark that is as soft as graphite and as indelible as ink, without requiring either: this is why it is ideally suited for the environmental characteristics of a space station, where, for example, the micro detritus produced by graphite may pose a hazard for the filtration system.

The collaboration between NAPKIN and Pininfarina got underway in 2014, with Forever Pininfarina Cambiano, a stylus that was met with great favour by consumers (more than 60 thousands pieces sold the world over) and by critics alike. Cambiano received from the prestigious international trade magazine “Le
Stylographe” the trophy for 2014 best writing instrument for its design and its innovative content. In Italy it was among the products nominated for the Compasso d’Oro 2016. Then came Forever Pininfarina AERO, which, in 2017, won the prestigious Red Dot Design Award in the Product Design category. 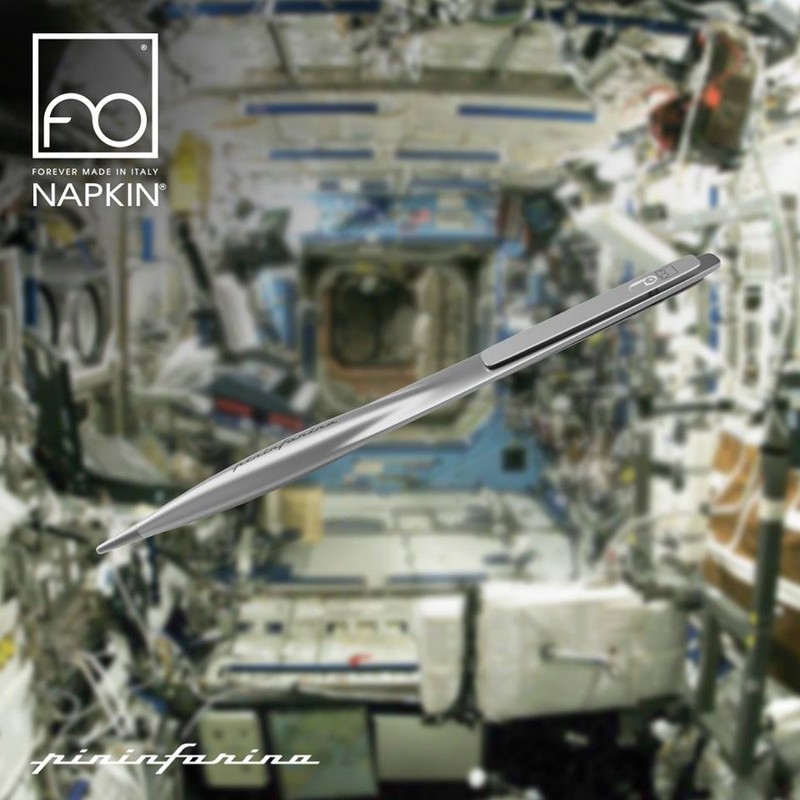 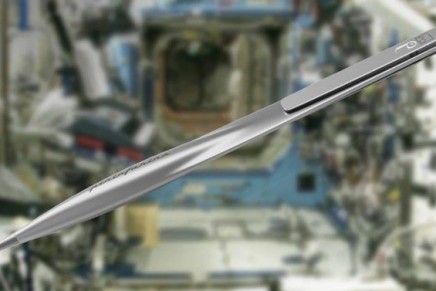 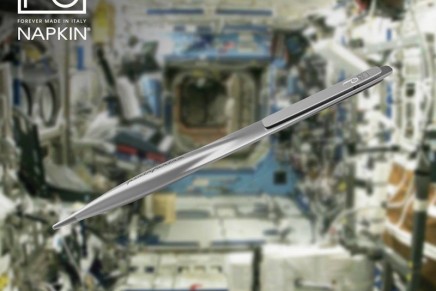