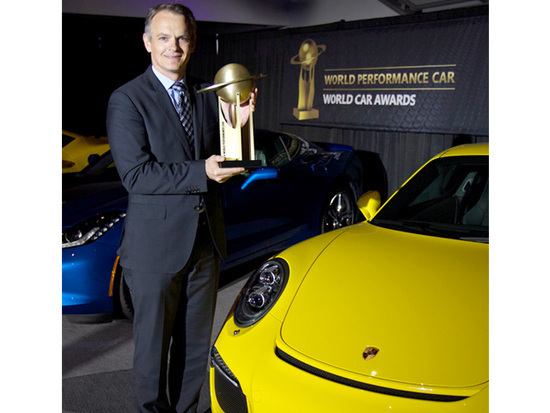 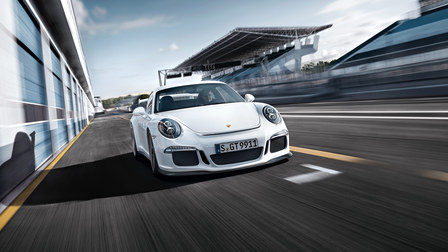 The Porsche 911 GT3 was named the 2014 World Performance Car at a ceremony at the New York Auto Show. The World Car Awards (WCA) are presented annually in four categories – Car Design, Green Car, Performance Car and Car of the Year. Winners are determined by an international panel of 69 automotive journalists from 22 countries. Jurors are appointed by the World Car Awards’ Steering Committee based on automotive expertise, experience, credibility and influence.

“To be chosen as the winner of the World Performance Car by this global jury is extremely rewarding,” said Detlev von Platen, president and CEO of Porsche Cars North America. “Each generation of the 911 GT3 epitomizes our vision of the ultimate pure bred, track ready sports car. And our newest iteration is no exception. To be elected against such formidable competitors by a large number of auto experts pays a huge compliment to our designers and engineers.”

Since the inception of the World Car of the Year Awards, Porsche has won World Performance Car three time; for the Boxster and Cayman 2013, 911 in 2012 and for the Cayman, again, in 2006. The fifth-generation 911 GT3 is the latest top performing naturally aspirated 911 from Porsche. Completely redesigned, it is lighter, more powerful and more fuel efficient than its predecessor. A wider front track and advanced technology like active rear wheel steering enhance the driving experience.

Delivering 475 hp, the 3.8-liter horizontally opposed rear mounted 6-cylinder engine is mated to a seven-speed Porsche-Doppelkupplingsgetriebe (PDK) transmission which drives the rear wheels. Acceleration from zero to 60 mph is just 3.3 seconds and top track speed is 195 mph. The 911 GT3 MSRP in the U.S. is $130,400, not including a $995 destination charge.

Watch also the other winners of The World Car Awards 2014.