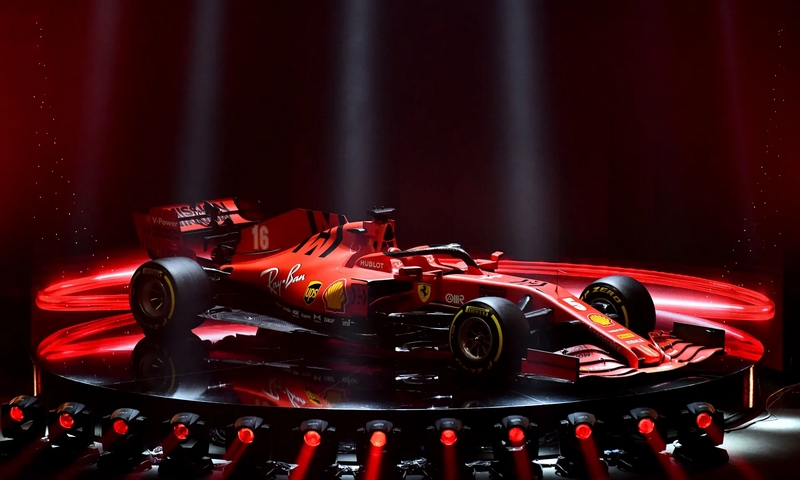 Ferrari have unveiled the SF1000, the new Formula One car; @Scuderia Ferrari

Ferrari have unveiled the SF1000, the new Formula One car they hope will end Mercedes and Lewis Hamilton’s dominance on the track.

The new machine was unveiled at the Teatro Municipale Valli in Reggio Emilia, Italy. Sebastian Vettel, a four-time world champion still waiting for his first title with Ferrari, said “I like it a lot. I can’t wait to drive it.”

“It is impossible to predict what will happen but I see a lot of hours that went into the car,” Vettel added. “I think it is a step forward and I hope it feels like that to drive. Part of the adventure is we have to be patient and we have to wait.”

Related: Toto Wolff will ‘give 100%’ to keep Lewis Hamilton at Mercedes

The SF1000 will continue to be developed in advance of the season-opening Australian Grand Prix in Melbourne on 15 March. Fans will get their first look at the new car in action when testing begins in Barcelona on 19 February.

Last season’s model, the SF90, struggled with aerodynamic issues as the wait for a Ferrari world champion continued. Kimi Raikkonen was the last driver to bring the title back to Monza, 13 years ago. The team will continue with Vettel and Charles Leclerc as drivers this season.

Ferrari’s launch comes amid progress towards a new agreement between F1, the FIA and the 10 current teams. The current Concorde agreement concludes at the end of this year, but senior team members are confident that a new deal will be struck.

Negotiations are continuing but the McLaren chief executive officer, Zak Brown, considers that one of the most contested problems – the fairer distribution of revenue – has been addressed, and it is likely all 10 teams will stay on the grid for the 2021 season.

The Concorde agreement is the contract between the commercial rights holder, now Liberty Media, the sports governing body, the FIA, and the competitors. Included within the new deal, as well as technical and sporting regulations, governance and a budget cap, is the distribution of just over $1bn (£772m) to the teams and engine manufacturers. Wide variances in payments based on the last Concorde agreement have long been a bone of contention.

Brown, who will oversee the launch of this season’s McLaren, the MCL35, on Thursday, believes the new agreement and its new revenue deal will be accepted. “I think it will go through, I would be surprised if all 10 teams on the grid this year are not on the grid next year,” he said.

The revenue is distributed among teams via a range of payments. Each receive approximately $35m (£27m) for taking part, then a secondary sum based on their championship position in the previous season. Beyond this, however, there is a series of supplementary payments.

Ferrari receive a longstanding team fee of what is understood to be around $73m. Four teams – Ferrari, Mercedes, Red Bull and McLaren – also receive a constructors’ championship bonus of between $30m and $40m. Further additional payments are also made to Red Bull, Mercedes ($35m each) and Williams ($10m).

The revenue differential between the top teams and the midfield can be of almost a factor of four. Liberty’s new structure is believed to address these inequities in an attempt to ensure every team are financially viable and better able to compete with far greater weighting geared to performance.

“I believe everyone is going to accept the revenue distribution as proposed,” Brown said. “It is a much more balanced. Special payments, other than Ferrari’s which is reduced, are gone and the gap between the best paid and least paid has closed up.”

Ferrari will receive a historical payment but it is understood it must be taken in the form of profit rather than toward funding their F1 activities. Equally, teams will still be recognised for longevity but must continue to perform to maintain a greater share of the pot.

Brown suggests it will represent almost a financial form of relegation or promotion. “They have come up with a clever way to address historical performance,” he said. “It doesn’t feel quite right that a new team should be on the same financial playing field as McLaren or Red Bull.”

Under the new system Mercedes, Red Bull and Ferrari will experience the biggest fall in income, with Brown believing McLaren would remain approximately at the same level. However with a budget cap of $175m set to be imposed the flatter distribution rate will not impact as heavily on the big teams. It will bring the rest of the grid much closer to them in funding and, it is hoped, their ability to compete.