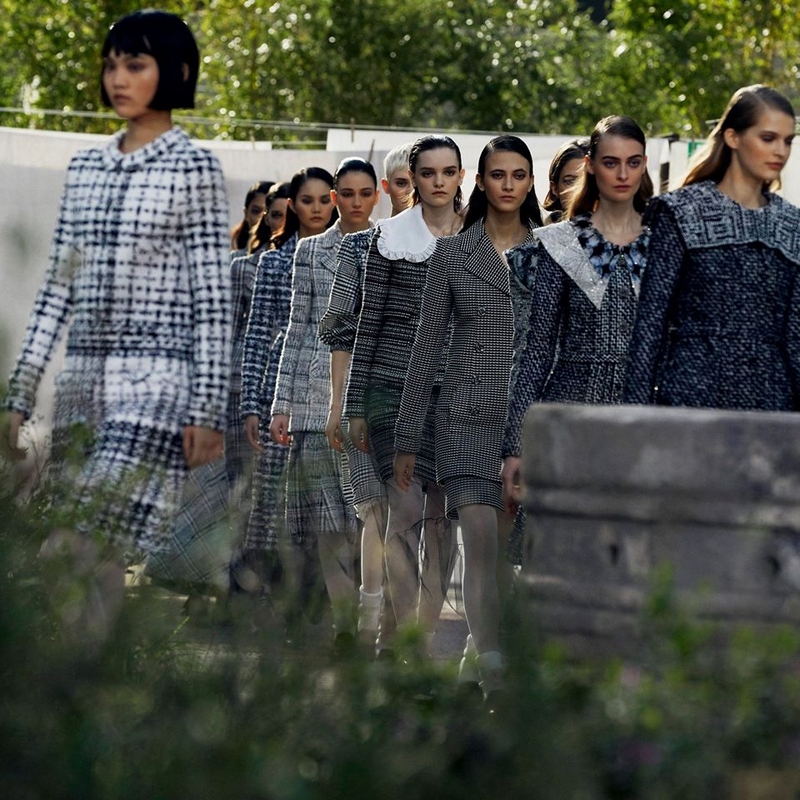 This article titled “‘The fashion show is over’: what I have learned from 20 years of catwalks” was written by Jess Cartner-Morley, for theguardian.com on Monday 8th June 2020 06.00 UTC

Fashion people love to exaggerate, but I have been to a lot of fashion shows – about 3,000, by according to my back-of-envelope maths. Mostly in London, Paris, Milan and New York, but also Tokyo and Rio de Janeiro, Berlin and Edinburgh, Marrakech and Reykjavik. Twenty years of pret-a-porter and haute-couture collections – two of each every year, give or take two maternity leave gaps, a bout of appendicitis and the time I messed up my US visa – adds up to a lot of catwalk time.

But now, suddenly, the fashion show is over. No more impossibly beautiful people in ridiculously gorgeous (or just ridiculous) clothes. No more seating squabbles, no more front-row gossip, no more writing copy in the back of a minicab between shows. There are no real-life catwalks this season, with the first all-digital London fashion week kicking off on Friday, and online-only events scheduled for Paris and Milan next month. Most probably no physical shows for the rest of the year, with September’s fashion weeks looking unlikely. And after that, who knows? Will social distancing and recession kill the catwalk for ever?

The squash and squeeze of fashion week makes watching football from my seat in the west stand at the Emirates look like a Glyndebourne picnic, and is at odds with new protocols about how we navigate each other. But long before the pandemic it was clear that fashion shows were out of control. Fashion weeks in cities throughout the world, brands presenting six or eight collections a year rather than two, with lavish production and international travel added up to an indefensibly large carbon footprint. If the combined impact of social distancing, travel restrictions and recession is that the fashion week is reinvented as a virtual moment, there will be much to celebrate in that.

But I will really, really miss fashion shows. They have brought me so much joy. My entry to fashion week coincided with the moment the catwalk was evolving from its second half of the 20th-century form – a chic but rule-bound, elite, inward-focused parade that served a clique of editors and buyers – into a stadium-sized pop cultural carnival.

The first fashion week I attended, as this paper’s new deputy fashion editor, was New York in September 1999. My trusty pre-Google paperback Dictionary of Fashion and Fashion Designers in no way prepared me to report on what I found. I remember Donatella Versace’s Versus show, where Madonna sat next to Rupert Everett on the front row – both in cowboy hats, I think – applauding Kate Moss as she strutted past us in white hot pants and gold boots. At Calvin Klein, Trish Goff wore a pencil skirt and plain fine-knit sweater with the sleeves pushed up and I had the feeling (one I have had many times since) of finally knowing exactly how I wanted to dress thereafter. Watching Naomi Campbell at Marc Jacobs, and that season’s new face – Gisele Bündchen – in a zebra-print bikini at Michael Kors, I was knocked out by the visceral power of the supermodel, goddess-made-flesh. And then there was a hurricane, and shows started getting cancelled. But the Alexander McQueen event went ahead, even though it took place on a pier in the Hudson.

Around the time of the millennium, McQueen was at the forefront of reinventing fashion as theatre. His rival for fashion’s attention was John Galliano, who had begun turning Christian Dior Paris catwalks into psychedelic costume parades. McQueen and Galliano had very different aesthetics – Galliano vibrant and supersized, McQueen dark and lean – but both loved to shock their audiences.

That night in New York, the models walked through a catwalk submerged in water. (Nothing to do with the hurricane, that was just the way that McQueen, with his uncanny instinct for the zeitgeist and apparently the weather, had planned the show.) After the model finale, a field of iron spikes rose up from the ground, their points skywards, and a troupe of dancers in burqa-like coverings pirouetted above them, suspended by silk ropes – an allusion to western fear of Islam that was made all the more unsettling when McQueen took his bow and dropped his baggy jeans on the catwalk to display stars-and-stripes boxer shorts. It was my first taste of the appetite-jolting salty-sweet lick of beauty and bombshell that a fashion week can be, and I was blown away. I suspect my reports were hopelessly breathless. I remember being halfway through reading one down the phone to the office in London, when the copytaker interrupted me, not unkindly, to ask: “Is there much more, love?” before sighing and audibly lighting another cigarette.

Fashion shows are as much about drama as they are about clothes. I have admired hundreds of perfect bouclé tweed suits, but the Chanel shows I will never forget are those staged in a giant supermarket where Rihanna pushed Cara Delevingne down the soft-drink aisle in a shopping trolley, the one where a space rocket launched during the finale – and the one where a voice informed us just before the show that M Lagerfeld was indisposed, and would not be attending that morning. He was 85, and had never missed one of his own shows before that; a month later, he was dead.

There is a special thrill in the expectant wait for a debut show to begin – Raf Simons at Dior, where the atelier was wallpapered with thousands of fresh blooms; Nicolas Ghesquière at Louis Vuitton, where an earnest note from the designer was on every seat; Lindsay Lohan at Emanuel Ungaro – of which, well, the less said the better. There is the camp, Strictly-final emotion of a farewell show. (After two decades of these I can tell you that nobody blinks back tears as prettily, in immaculate black tie and with a poignant half smile, as Tom Ford.)

On stage at Sadler’s Wells in 2000, Hussein Chalayan transformed chairs into dresses and a coffee table into a hooped skirt. When Marc Jacobs was at Louis Vuitton, a courtyard of the Louvre was decked out as a belle époque railway station, and we sat on benches waiting for the show to begin. Then a real train trundled down the tracks and the models got out of it. That was eight years ago, and I still wonder how they did it.

In 2007, Prince got up out of his front row seat at Matthew Williamson and did a set on the catwalk. In 2018, the actual Queen turned up at London fashion week. And yet for all the hoopla, some of the most perfect fashion moments have been those shows that are pure, old-school chic. Christian Lacroix’s catwalk shows in Paris, when a red rose was left on every seat and his seamstresses cheered from the back rows. Yves Saint Laurent’s final shows before his retirement, the audience squished on to tiny benches but thrilled to be there, the elegance austere and intoxicating as cold vodka. In recent seasons, The Row have conjured that same chic mood at their sublime New York fashion shows.

There are cultural issues with fashion shows that run deeper than the logistics of social distancing and are as problematic, in their own way, as the events’ carbon footprint. Whether you look on the catwalk or the front row, or at the Instagram influencers, the world view of fashion weeks skews sharply towards skinny white women. There is still a huge amount of work to be done on diversity, not just on model casting but in ensuring that people of colour are represented within brands’ creative teams, and in audiences. There are still too few women at decision-making level within the fashion business. However, it is not true that fashion shows have nothing interesting to say. Jean Paul Gaultier was challenging gender stereotypes on the haute-couture catwalk back in 2002. Raf Simons used his debut at Calvin Klein in February 2017 to challenge Trump culture with a homage to an alternative vision of Americana. Maria Grazia Chiuri’s Christian Dior shows have consistently placed feminism at the forefront of fashion-week conversation. Vivienne Westwood has made London fashion week a platform for climate activism. At New York fashion week, Pyer Moss designer Kerby Jean-Raymond has shown the power of being both an activist and a designer. In 2016, his collection was accompanied by the screening of a powerful film about police brutality against people of colour.

Just as even a top-flight sports match is not the same when played without fans, fashion week will be very different without a live audience. The synchronised intake of breath that would sweep around the Tennis Club in Paris during a Phoebe Philo Celine show on first view of a particularly delicious polo neck. The camaraderie and hysteria that builds over the course of a month on the road. The time Anna Wintour jumped up and led a standing ovation for McQueen’s They Shoot Horses Don’t They? The backstage scrum to get close to a designer for a quote, which is usually mumbled or Delphic or both. (One season, I thought Miuccia Prada said her collection was about moccasins and another broadsheet fashion editor thought she had said it was about democracy; either was equally believable.) I will even miss people unfathomably bursting into tears at Comme des Garçons. All of this has been, frankly, a blast.

But fashion must move with the times, Otherwise it’s not fashion. The catwalk has reinvented itself a hundred times over, swapping ballgowns for streetwear, ditching stuffy salon shows in favour of popcorny clickbait. Digital is how we live now – so that’s where the fashion show needs to live, too. The catwalk has a fabulous history, but fashion is about the future. So I’ll be binge-watching the next season of fashion from here, at home on my laptop. And I can’t wait.