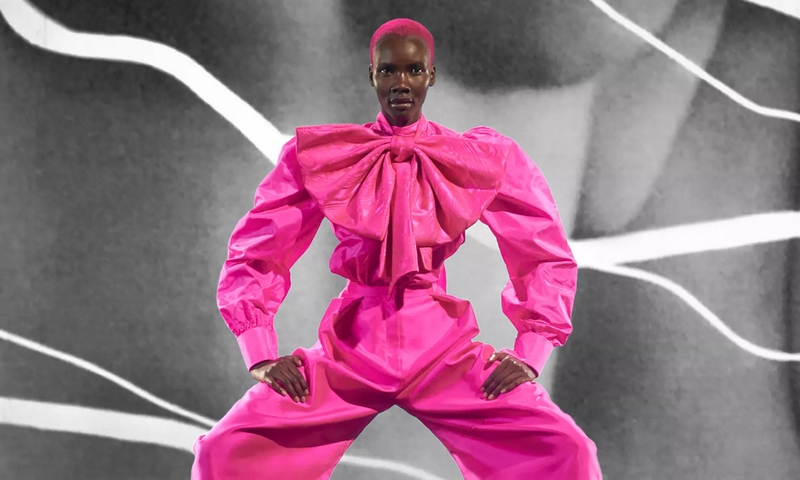 This article titled “Fantastical frocks rule in off-the-peg Schiaparelli range” was written by Jess Cartner-Morley, for The Observer on Saturday 29th September 2018 17.16 UTC

Can you make surrealism real? That is the question for the house of Schiaparelli. The Paris couture house founded by Elsa Schiaparelli almost a century ago has launched its first collection of ready-to-wear clothes and handbags. For a label that has always celebrated the fantastical rather than the wearable, it is a concept almost as far fetched as Elsa Schiaparelli’s famous hat in the shape of an upturned shoe.

Yet despite its long history of eccentricity, there is something very modern about this fashion house. The aesthetic is emoji-like, all lobsters, hearts and eyes. Schiaparelli designed the first jumpsuit, in 1930, and was the first designer to set a catwalk show to music. It was Schiaparelli and her friend Salvador Dalí who invented the art-fashion collaboration, as currently espoused at Calvin Klein and Raf Simons with US artist Sterling Ruby. (Legend has it that Dali wanted the lobster-embroidered evening gown he and Schiaparelli created to be displayed in the salon with a dressing of real mayonnaise, but he was overruled.)

“We wanted to revisit this idea of collaboration, which is such a part of Schiaparelli history” said Bertrand Guyon, creative director for the past three years, speaking at the house’s salon in Place Vendôme.

For the ready-to-wear collection, he took as a starting point Schiaparelli’s friendship with Man Ray and created clothes based on iconic artworks, in partnership with the Man Ray Foundation. Glass Tears, the artist’s famous close up of a pair of eyes, appears on a white T-shirt studded with Perspex teardrops, while the floating red lips from Observatory Time: The Lovers appear on a collaged, silk-screen shift dress.

One of Elsa’s quirks was a superstitious devotion to the letter S. Shocking pink, her signature colour, inspired her perfume, Shocking. The first Schiaparelli handbag, designed by Guyon with a keyhole design on the clasp, is called Secret. It will retail at the fantastical price of £5,000.

The surreal side of Paris fashion week was also on display yesterday at a pop-up shop in a warehouse on the left bank of the Seine, selling €100 rugs from Virgil Abloh’s soon-to-be released collection for Ikea. Half an hour before the opening time, a 500-strong queue of Abloh’s young fans stretched along the quai, excited by the prospect of buying one of his designs without the price tags that come with his Louis Vuitton menswear. For Abloh, the project keeps communication channels open with a broader audience than can afford luxury fashion or designer furniture. “No one owns anything any more, but if you have knowledge of a certain chair, then it is part of your dinner conversation. That is the millennials’ train of thought,” he said recently.

By the time models began zooming past the audience on skateboards in a garage in the Marais, it was clear that this was not a day for ordinary catwalk shows. Andreas Kronthaler, Vivienne Westwood’s husband and a designer in his own right, took Jessica Fulford-Dobson’s portraits of female skateboarders in Kabul as a starting point for a collection that saw men and women in colourful loose robes. Some women – and a few men – skated in heeled mule sandals, although those in vertiginous platform boots stayed on foot. Westwood, who watched from the front row in a horse-print dress from the collection and an orange cardigan tied around her waist, joined her husband on the catwalk for his final bow, where he presented her with a bouquet of flowers.