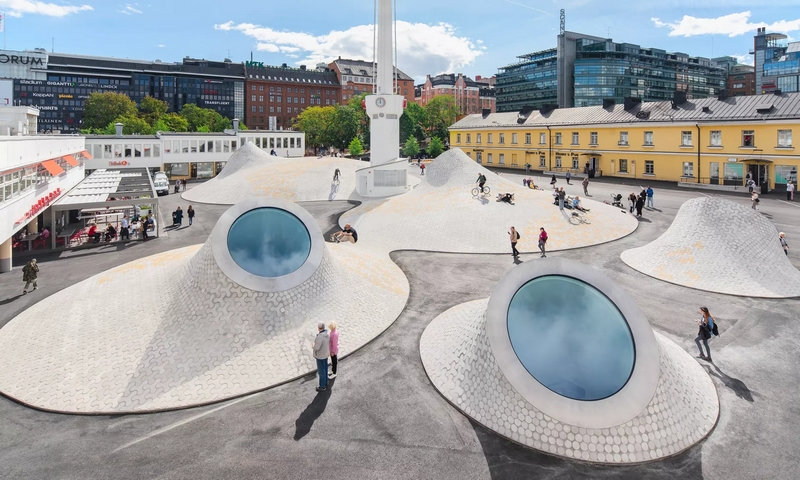 Bulging white mounds rear up out of the ground in the middle of Helsinki, tapering to circular windows that point like cyclopean eyes around the square. Children scramble up the steep slopes while a skateboarder attempts to glide down one, past a couple posing for a selfie at the summit.

This curious landscape of humps and funnels signals the arrival of Amos Rex, a €50m (£45m) art museum for the Finnish capital, which opens this week in a vast subterranean space beneath a former bus station parking lot.

“It is as if the museum didn’t quite agree to go underground,” says Asmo Jaaksi of local architecture firm JKMM, which masterminded the project, “and it’s somehow bubbling up into the square.”

It is a suitably truculent metaphor for this forthright city, which in 2016 turned down the prospect of having its own Guggenheim Museum, after five years of bitterly contested public debates. While the Guggenheim’s mooted harbour-front location remains empty (earmarked as a potential site for a new architecture and design museum, announced last week), the opening of the privately funded Amos Rex adds convincing weight to the argument that Helsinki is a world-class cultural destination in its own right, without the need for a branch of the US franchise.

Beneath the lumpy landscape stretches a gargantuan 2,200 sq m flexible exhibition space (almost twice the size of the V&A’s new underground gallery), which has been cleverly excavated in the centre of town, between a former army barracks and the Lasipalatsi, or glass palace, a 1930s entertainment and retail complex. This glory of Finnish functionalism has been immaculately restored, with timewarp interiors of fleshy salmon columns, a sweeping spiral staircase and spherical glass light fittings that dangle like clumps of frogspawn from bright red and blue ceilings. Its 500-seat cinema is a wonder of the period, with chrome-edged red upholstered seats, flying saucer lamps and pleated mustard-coloured curtains. Outside, the building’s former boilerhouse chimney stands proudly in the centre of the new square with a nautical air, like the funnel of a ship now cast adrift in the churning sea of paved mounds.

Designed by three radical young architects when they were still students, the Lasipalatsi was intended to be temporary, giving them a freer rein to let rip and allowing them to incorporate such details as first outdoor neon sign in Finland. Eighty years on, the streamlined white building provides a stylish foil to the futuristic underworld that JKMM has concocted.

Entering off the city’s main Mannerheimintie avenue, visitors are greeted with a big picture window that frames one of the new mounds in the square beyond before descending down a broad staircase to a bright white foyer. The ceiling is covered with spirals of white illuminated fabric that gently throb, giving the impression of being beneath some ethereal cloud canopy (a welcome sight in Helsinki’s dark winter months), while two great conical voids plunge down from the piazza, framing views of surrounding buildings through their circular windows. It is a world apart from the former home of the Amos Anderson Art Museum, founded on the legacy of the property speculator turned media mogul and patron of the arts in his former newspaper offices in 1965.

“Art used to be something you hung on the wall and went respectfully to contemplate,” says the museum’s director, Kai Kartio. “Today it is increasingly interactive and conversational, something people make and experience together. We realised that if we wanted to meet the challenges of the future, we had to have something different from our charming old office building.”

The resulting space is as far away from the 1913 art nouveau block as could be imagined. It feels like a group of conjoined circus tents that form a single undulating ceiling above the expansive hall, clad in a continuous skin of circular white disks, and soaring up and swooping down from the gaping round roof-lights. Or at least that’s what you would see if the place hadn’t been divided up and blacked out for the opening exhibition, Massless, a virtual reality spectacular by Japanese group TeamLab.

It is an odd decision to launch an airy top-lit gallery with a black-box installation, but the interactive, hi-tech bonanza promises to be a crowd-puller. Featuring 140 projectors, and an entire room of supercomputers and servers, the series of hypnotic environments transports you to another realm. A “digital ecosystem” of butterflies, frogs and geckos multiplies around one mirrored labyrinthine space, the psychedelic jungle responding to visitors’ movements. Kids can draw animals, scan them and have them added to the fairytale forest; some will delight in chasing these creatures around and stamping on them to release digital splatters of paint. Stand still for long enough and bunches of flowers begin to bloom at your feet, mingling with the technicolour flotsam of pulverised bugs.

Elsewhere you can marvel at a flock of Yatagarasu, the three-legged crows of Japanese myth, as they glide around an infinitely black room at nauseous speeds, weaving neon vapour-trails in knotted loops to the sound of trance music. The crescendo comes in the biggest room of all, where the team of programmers has simulated a biblical flood of water gushing up from the ground and spiralling around the conical ceiling in a great vortex, as if the whole building had been tipped upside down, the roof-light transformed into a monumental plughole.

After all this digital wizardry, the small room dedicated to a permanent exhibition of post-impressionist paintings seems like an afterthought, tucked into a low-ceilinged windowless space – something the architects had to include but didn’t quite know how.

The large column-free hangar has become the default desire for most new museum extensions – but it so often ends up being compartmentalised and blacked out. It will be interesting to see how Amos Rex’s next two exhibitions, spanning the diverse poles of surrealist painter René Magritte and experimental Dutch art collective Studio Drift, make use of the great concrete tent.

Up above, more families are clambering on the mounds and peering in through the windows to get a glimpse inside their new cultural bunker. The architects hope their sloping landscape will become a spontaneous auditorium for outdoor concerts and events, but even without any performances it has already become a magnet of activity in the middle of the city, whose oversized squares often feel a bit windswept. And there’s a spectacular gallery underneath it, to boot.