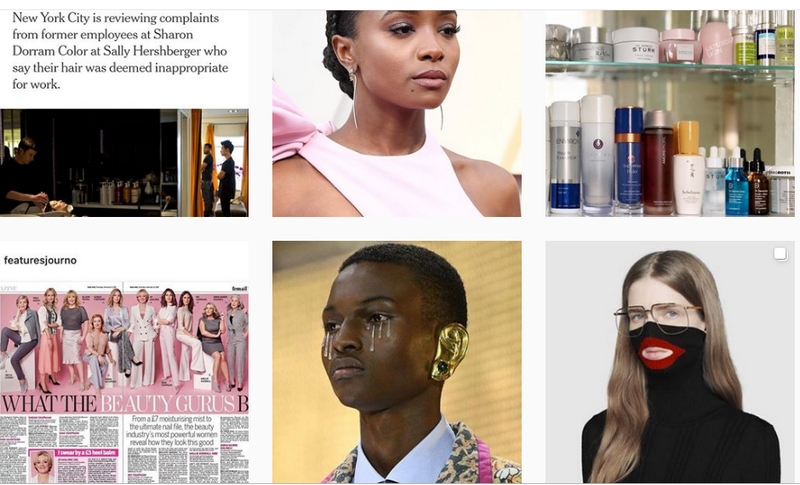 This article titled “Estée Laundry: the Instagram collective holding the beauty industry to account” was written by Lisa Niven-Phillips, for theguardian.com on Wednesday 10th April 2019 16.01 UTC

Criticism over the cultural insensitivity of the name was reassuringly swift – most notably on social media – and within a week, the brand had apologised on Instagram, and pulled the product “until it can be renamed”.

Among the first to call out Fenty was Instagram account Estée Laundry. Like its fashion industry equivalent, Diet Prada, this account made its name flagging up copycat behaviour, as well as cultural appropriation, lack of diversity and unsubstantiated product claims from major brands. As beauty brands navigate, often clumsily, a world in which a lack of inclusivity, transparency and accountability will no longer fly, the anonymous collective has become the beauty industry’s unofficial watchdog.

“The worst thing brands and targets of negative criticism can do is to stay silent and hope for things to blow over. The internet never forgets,” says Estée Laundry, which describes itself as “a small beauty collective devoted to bringing transparency, honesty and equality” to the beauty industry. “We were surprised and delighted by Fenty’s immediate response. Most brands get defensive and try to attack us.”

Estée Laundry’s almost 60,000 followers include beauty editors, a strong contingent of PRs (appearing on Estée Laundry is presumably a publicity nightmare), and even Victoria Beckham – wise, perhaps, considering the upcoming launch of her own beauty line. Posts are regular, and followers, or “Laundrites”, are invited to weigh in on the day’s offending items.

If its followers are well known, it remains insistently anonymous because “it’s important to make sure the focus is not on us, but the topics we cover”. Instead, it is run by a collective who work in the beauty industry, either full- or part-time. While Diet Prada revealed themselves to be a duo from New York City, Estée Laundry says it’s “a handful” in number, based in “a combination of places”. Tracked down through Instagram direct message – their preferred medium – they respond as one, rather than identifying their separate voices.

The account began due to a perceived lack of accountability within the industry – but also a rise in what is referred to as “call-out culture”. “Brand founders were bullying customers on social media, brands were knocking each other off, there was no diversity, and sustainability was completely ignored by most brands,” Estée Laundry says. It “watches the beauty industry closely”, but also relies on user-submitted content. “Our army of Laundrites are constantly notifying us of new stories,” it says.

Brands’ responses to Estée Laundry’s ire have not always gone down quite as well as Fenty Beauty’s. Skincare brand Drunk Elephant, a new line that purports to selling “clean skincare” and is predicted to exceed $100m in sales, has a more fractious relationship with the collective, its founder Tiffany Masterson having clashed with a Laundrite via direct messages which were then posted to Estée Laundry’s Instagram Stories. Estée Laundry claims that Drunk Elephant has now blocked its account.

It’s called out millennial beauty brand Glossier for erroneously marketing its mascara as vegan, Beautyblender for its limited foundation shade range, and Kim Kardashian-West for her widely derided appetite-suppressing lollipops. Some brands have apologised, some have doubled down on their original statements and others have ignored it altogether. Estée Laundry doesn’t work with a legal team in advance of posting and as yet nobody has sued, though it says it has “had threats” and “gets legal counsel when required”.

The issue of accountability within the beauty industry has always been murky. The advent of blogging in the early noughties called into question the extent to which magazines were beholden to high-value advertisers, whilst the rise of Instagram has led to new regulations on the influencers sharing gifts and paid-for content on their pages. Accounts such as Estée Laundry (and fellow Instagram beauty custodian Gelcream) pride themselves on a no-ad policy.

Call-out culture is, of course, controversial. The presence of Estée Laundry and its peers surely makes brands think twice about campaigns that could cause offence, and rightly so. But on some occasions, can it be a bit, well, mean? The collective readily admits that it has been quick to judge on some occasions. “While we always try to do the right thing, there have been a couple of times where we had to delete a post after hearing the other side’s perspective,” it says.

“In the age of Instagram, where there are no secrets, people expect authenticity and honesty from brands,” it says. “It’s holding brands and celebrities accountable and creating a culture of transparency. Of course, with power comes responsibility, but if used fairly, it can be a force for good.”

• This article was amended on 16 April 2019. An earlier version stated that Drunk Elephant founder Tiffany Masterson clashed with Estée Laundry directly, when she in fact clashed with one of its social media followers.