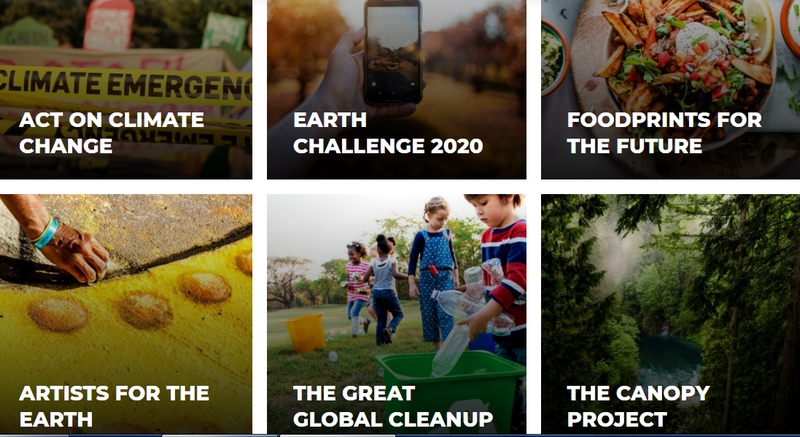 Greta Thunberg has urged people around the world to take a new path after the coronavirus pandemic, which she said proved “our society is not sustainable”.

The Swedish climate activist said the strong global response to Covid-19 demonstrated how quickly change can happen when humanity comes together and acts on the advice of scientists.

She said the same principles should be applied to the climate crisis.

“Whether we like it or not, the world has changed. It looks completely different now from how it did a few months ago. It may never look the same again. We have to choose a new way forward,” she told a YouTube audience in a virtual meeting to mark the 50th anniversary of Earth Day.

“If the coronavirus crisis has shown us one thing, it is that our society is not sustainable. If one single virus can destroy economies in a couple of weeks, it shows we are not thinking long-term and taking risks into account.”

The teenage campaigner, who initiated the global school strike movement, was filmed at the Nobel Prize Museum in Stockholm in digital conversation with Johan Rockström, the earth systems scientist and director of the Potsdam Institute.

He said there was a strong correlation between the pandemic and the environmental crisis: deforestation and the wildlife trade heighten the likelihood of viruses leaping the species boundary; air pollution increases human vulnerability by weakening respiratory systems; and the expansion of air travel allows epidemics to spread more quickly. “The scientific evidence shows they are interconnected and part of the same planetary crisis,” he said. “We are living beyond the carrying capacity of the planet so we are putting human health and the health of nature at risk.”

The lockdown has reduced emissions and hurt the oil industry, which is the biggest source of the greenhouse gases that are heating the planet to dangerous levels. But the two speakers stressed the virus should not be seen as an environmental panacea because it has brought immense human suffering, provided only temporary respite and distracted from campaigns, research and international meetings that aimed to find a smoother transition to a clean economy.

The key lesson from the pandemic, they said, was the need for governments to pay more heed to scientific warnings.

“We have underestimated the shocks. We need to build more shock absorbers into the system,” Rockström said. “Around the world, people are recognising the uncertainty and are being cautious. Also regarding the climate, we cannot know for certain how far we can push up global warming. So I hope that we come out of the pandemic with the recognition that science shows: it’s not worth taking the risk … I believe that something new is coming from the ashes of the corona crisis. We’ll rise out of this, but not by bouncing back to the old world.”

He said there was more support now for green new deals in Europe and South Korea and for China to go beyond the economy when setting priorities.

Related: Earth Day 2020 could mark the year we stop taking the planet for granted

Neither speaker mentioned the US president, Donald Trump, Brazil’s president, Jair Bolsonaro, or other leaders who have either dismissed the risk of the pandemic or used it to relax environmental protections and health standards in the name of economic recovery. But Thunberg alluded to these dangers.

“During a crisis like this there is a big risk that people try to use this emergency to push their own agenda or their own interests. We need to make sure that doesn’t happen,” she said. “I cannot stress enough how important it is that we are active democratic citizens so a crisis like this doesn’t slide in the wrong direction.”

Elsewhere, the UN secretary general, António Guterres, marked Earth Day by declaring the pandemic to be the biggest threat the world has faced since the second world war, though he said the environmental emergency was deeper.

He said post-pandemic recovery should focus on six goals: the creation of clean, green jobs; taxpayer support for sustainable growth; an economic shift from grey concrete to green nature; investment in the future rather than the past with an end to fossil fuel subsidies; the incorporation of climate risk into the financial system, and international cooperation.

A new opinion poll suggests there is strong support for this view. Sixty-six per cent of Britons believe the climate is as serious a long-term crisis as Covid-19 and 58% agree it should be prioritised in the economic recovery. The survey of 14 countries by Mori found even higher levels of support in China, Germany, France, India, Italy and Japan. Even in the least enthusiastic nations – the US and Australia – a majority supported green priorities in stimulus programmes.

Public opinion has shifted dramatically in the past two years as a result of increasingly grim climate studies and high-profile campaigns by groups such as FridaysForFuture and Extinction Rebellion. Big strikes and marches have been postponed but Thunberg vowed they will return once it is safe to return to the streets.

“We have to adapt. That is what you have to do in a crisis,” she said. “People are thinking we will get out of this and then we will push even harder.”