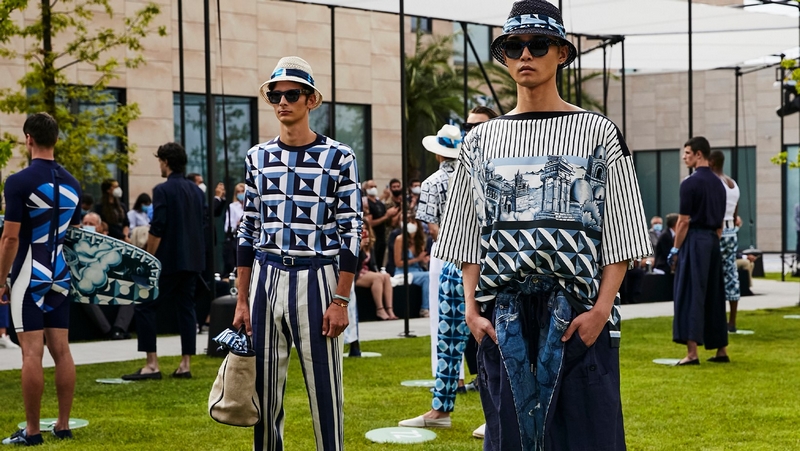 As the fashion industry grapples with how to turn a new leaf in the wake of Covid-19, Dolce & Gabbana became the first major fashion house to revive the physical catwalk show. Its menswear event on Wednesday was staged in the grounds of Milan’s Humanitas University, where research into a coronavirus vaccine is currently taking place.

The 260 guests, mostly although not exclusively Italian, were asked to keep a 1-metre distance from fellow show-goers, wear a mask at all times, and warned that if their bodily temperature exceeded 37C on arrival, they would be refused access.

“We can’t imagine a fashion world without live shows; designers, journalists, buyers and all of us need them,” Domenico Dolce told the Guardian. “Slowly we have to start over, totally respecting the safety regulations in force. To us the live fashion show is fundamental, it’s part of the dream.”

Backstage, usually open to the press, was closed with hair and makeup artists wearing face masks and shields. Attendees, a mix of editors, clients and celebrities, including the singer Elettra Lamborghini, mostly – but not all – wore face coverings during the show while models removed their masks for the catwalk.

In March, Dolce and his designer partner Stefano Gabbana made a substantial donation to support Humanitas University’s research program, aimed at clarifying the immune system’s responses to Covid-19. Alberto Mantovani, the institution’s scientific director, said that “four months later, the programme has contributed to the greater knowledge of the disease”.

Two of the university’s recently graduated doctors welcomed the audience, announcing: “The day can serve as a reminder of our determination to move forward.” Above them, an English sign translated Italy’s widely adopted mantra: “Everything is going to be all right.”

The risks of putting on a show so soon have been hotly debated. Fellow luxury labels including Prada, Dior and Gucci all opted for digital presentations at this Milan fashion week in lieu of a live event. Fellow Italian brand Etro, meanwhile, held a live outdoors show in the city, which attracted criticism as images of audiences members not wearing masks began to circulate.

Of the D&G event, Paul Hunter, professor in medicine at the University of East Anglia, said that “all of the steps that Dolce & Gabbana have put in are sensible and will certainly reduce the risk somewhat, providing people follow the advice, but nothing is an absolute guarantee”. Hunter added that social gatherings after such events exposed a risk of transmission, since people “tend to meet up afterwards in bars and cafes and it is this sort of wider socialising associated with large events that could increase transmission”.

At a post-show cocktail reception held in the university canteen, trailed as “socially distanced” on the invitations, distancing guidelines could be seen to be only patchily observed.

Dolce & Gabbana told the Guardian that during lockdown in Italy “preparation went on” for the 103-look collection, inspired by the architectural lines and nautical-hued ceramics at the 1960s Parco dei Principi hotel in Sorrento, designed by Gio Ponti. This was a pared-back offering of layered linen suits and mosaic prints with a Neapolitan theme. The designers, who were forced to cancel a show in China in 2018 following accusations of racism, stuck to Italian themes.

On Tuesday, the mayor of Milan, Giuseppe Sala, welcomed the return of fashion activity to the city, saying that while the Italian fashion industry was vital for the economy, it must “[not just] come back to business as usual as soon as possible [but] look for a new and different normality,” adding: “Milano is fashion and fashion is Milano.”