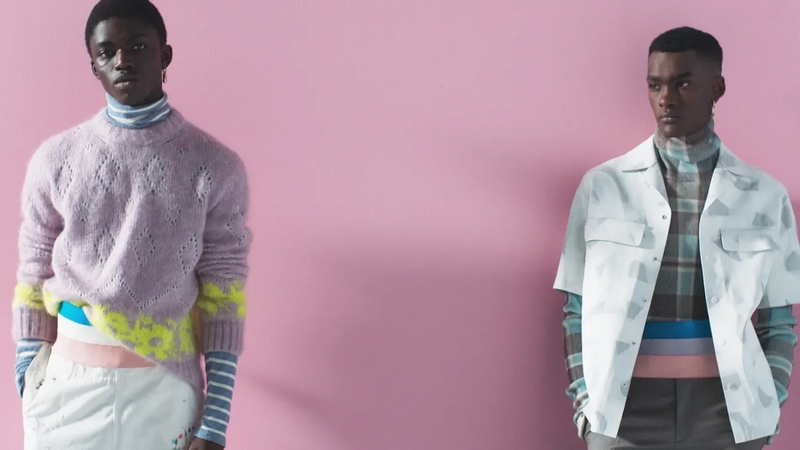 As luxury fashion tries to adapt to the coronavirus crisis with a run of digital events, the Dior men’s collection showed another timely shift as it confronted the issue of diversity on the catwalk.

One week after the brand was criticised for casting an all-white ensemble of models for its womenswear couture presentation, the artistic director of menswear, Kim Jones, featured only black models in his spring/summer 2021 collection, which was designed in collaboration with the acclaimed Ghanaian portrait painter Amoako Boafo.

“It’s not political: we started this back in December,” said Jones, speaking from his London home. “But one of the things designers can do is [reflect] the time they are in. For me, diversity is a natural thing; a reflection of the wider world.”

The collection, titled Portrait of an Artist, was shown as a two-part presentation that began with one film shot in London and at Boafo’s studio in Ghana by video artist Chris Cunningham, and a second, showcasing the clothes, which was filmed in a catwalk-like setting to a Max Richter soundtrack.

Jones was inspired by Boafo’s Black Diaspora series, which explores his identity and black masculinity. The artist’s influence was ubiquitous, with Jones transposing the works on to clothes, in some cases hand-painting the portraits on to coats and knitwear or simply borrowing from the print or mood of a portrait.

There were tailored shorts of varying lengths and ribbed knits in neon yellow and pink. Sheer shirts, trenchcoats and parkas came in pastels, while jacquard patterns mimicked a painted canvas. The models wore desert boots or socks and sandals, most sported a single earring and several wore a Stephen Jones beret.

The latter accessory provided the show’s talking point. The collection’s e-invitation featured Boafo’s Green Beret portrait of a man in an ivy leaf print shirt and green beret. His earlier work has referenced the Black Panther movement, for which berets and polo necks, another feature of the collection, have become emblematic.

Boafo, 35, is known for his large oil portraits of friends and campaigners, whom he renders in thick, gestural strokes using his fingers, while using a brush to paint the clothes. “I love fashion; fashion inspires my work. But the interesting part for me is how they are able to transfer my technique on to clothes,” he said.

Early signs are that the collection and film were well received on social media. Pam Boy, a senior editor at Love magazine, pointed to the fact the Dior designer had spent part of his childhood in various African countries. “Kim Jones is part of the very exclusive club of white Africans, that’s why he didn’t miss a beat with his Dior SS21,” he tweeted.

Formerly of Louis Vuitton, Jones has become well known for merging suiting with streetwear, and reworking tailoring for a modern audience. These commercially successful partnerships have helped to make Dior the world’s biggest luxury brand.

Despite remaining in London since March, Jones has worked on three collections in lockdown. He says his team at the Dior workshop in the capital followed coronavirus guidelines throughout.

“I’ve seen very few people apart from the team that are in England. We’ve been isolating so we could work together,” he said. “My main concern is how young designers and businesses will be affected and what we can do to support them.”

But Jones remains hopeful the industry can overcome the economic fallout from the pandemic. “Let’s not forget Christian Dior was born out of the ashes of the second world war,” he said.