Designed by Clare Waight Keller, the Givenchy Haute Couture Fall Winter 2018 collection was created as an homage to Monsieur Hubert de Givenchy, not only for the timelessness of his creations but as a tribute to the innate elegance of the man himself and the grace with which he lived. 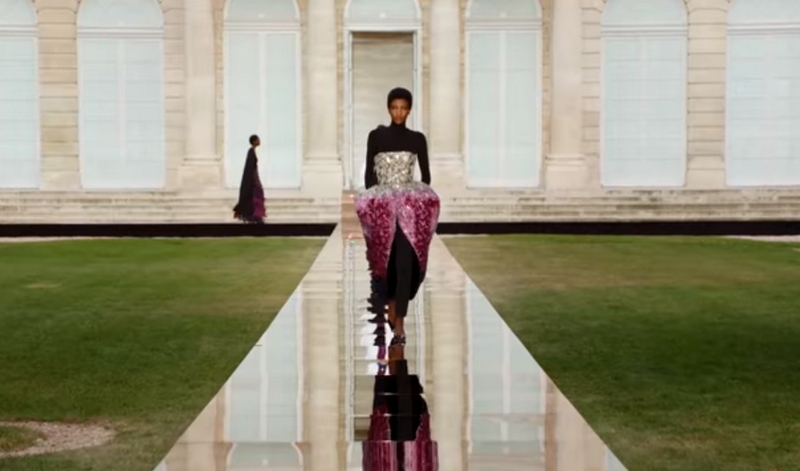 Clare Waight Keller’s autumn 2018 couture show, which took place in Paris on a hot Sunday night, capped off quite the summer for the British-born artistic director of Givenchy. Or, as she is perhaps more widely known, the woman who designed the Duchess of Sussex’s wedding dress.

This was only her second couture show, though in her 16-month tenure at the French fashion house she has already proven to be a lot of firsts: the first of Givenchy’s artistic directors to dare to bring couture back after the house dismantled it in 2012. And the first woman appointed to head the storied house that Hubert de Givenchy built. But, as she said backstage, she was also the first artistic director to meet the founder and designer who died three months ago: “and so having met him and spoken to him and the fact that he passed only three months ago, I realised his legacy needed to be celebrated”.

And so, in what also became a day of posthumous celebrations at Paris’s couture – first at Sonia Rykiel whose collection was a stylistic homage to the work of Rykiel who died in 2016, and then here – Waight Keller also became the first person at Givenchy to address his legacy in full. Both by rifling through his archive, and in a collection which concentrated on the pas de deux between the designer and his muse, Audrey Hepburn, and a relationship upon which the entire Hollywood fashion industry was arguably built. How? Most obviously via an unambiguous finale which finished with both a Holly Golightly-esque sleeveless black dress and Hepburn’s rendition of Moon River playing overhead.

Set in the grand gardens behind the Archives Nationales, and based around a bronze metallic catwalk which reflected both the chestnut trees and partially clouded sky, the show was otherwise an unabashed celebration of 50s and 60s glamour. This was key, she said: “we all know the big stars of couture but Hubert was the other star of the 50s and 60s that came out”.

Givenchy has a history of connecting women to shape, and the collection focused on the singular aesthetic of Hollywood glamour, realised in complementary ways. Either via sharp, clean tailoring or through grand, floor-sweeping gowns. Both were predominantly monochrome with the odd flash of emerald green, icy pastels or dark mineral palette. There wasn’t a whiff of duchess Meghan’s ultra-simple dress – and no questions asked – although most of the drama did centre around the shoulders, in true Givenchy style. Sturdy capelets dominated the first half, appearing in full-length silken versions or more cropped and structured shapes with several models wearing them ‘robe’ style, to leave them hands free. Elsewhere, shoulders rose up from tulip-shaped dresses which sat off-shoulder, or were visible above coat-like dresses, and came with another Givenchy/Hepburn tic – the bow.

Waight Keller was keen to look to the past, and to the symbiosis between Givenchy and Hepburn, but recast it in her vernacular “so as not to let her overwhelm it” she said. “I didn’t re-watch anything, I just wanted to absorb what I knew”. She trawled through his archives and came across “capes, the peekaboo necklines, and the architecture. There were things I didn’t know he did.” Most eyebrow raising was the use of metal, which was beaten into shape to form warrior-like chokers, and crescent-shaped hair pieces, and which was a central if underdocumented part of the Givenchy archive. Perhaps the greatest reminder of past and present came when a drone flying overhead to film the show narrowly missed a gull.

If the collection felt almost architectural, Waight Keller was the first to admit it: “it is very difficult to get the shape and line with feathers.” The challenge, she said, was to create “a floorless feeling – to create something that floats” but using modern materials not available to Hubert, she said, alluding to rich silks, French velvet, soft leathers, Japanese bonding techniques and sequins designed to move like liquid. “It made everything feel much more modern.” Even the Hepburn-esque black dress came updated, with a crossed back and monastic black hood.

With sales split 50-50 between men’s and women’s, she also included menswear in her show, although the structured variations on black tie were far from distracting. That one male model carried a dog chain suggests the Givenchy couture man is more of a plus one. Still there is a lot riding on Waight Keller’s work. The brand has revenues near enough to €600m (£530m). When she joined, Bernard Arnault believed she would increase revenue further still – the aim, it’s said, is to reach the Dior “billion dollar club” as the press sometimes calls it.

Prior to her role at Givenchy, the designer had worked her way up fashion’s hierarchy, working on menswear at Ralph Lauren, and then at Gucci, Pringle of Scotland and most recently, Chloe. Predictions that she would bring the soft-focus breeziness of Chloe – where she was creative director for six years – to Givenchy and perhaps bring back the brand’s “Hepburn history” have been heard in the wings; reductively or not, both women are routinely described as gamine.

The show notes mentioned Hubert de Givenchy’s “mythical oeuvre”, and the relationship between “noble fabrics” and “an untouched natural beauty”. In short, the past of Givenchy reimagined for the present for the first time in the label’s history.