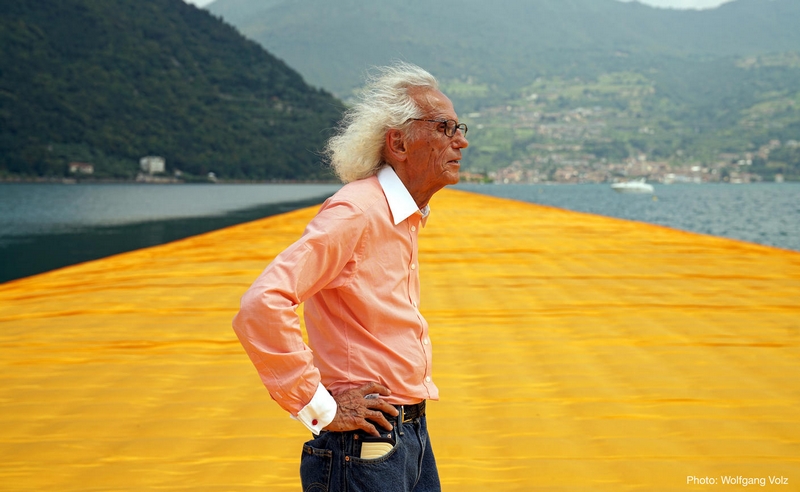 This article titled “Christo obituary” was written by Charles Darwent, for The Guardian on Monday 1st June 2020 12.06 UTC

On 25 February 1994, the Bundestag sat in extraordinary session in Bonn. Arguments were heated. The chancellor, Helmut Kohl, chose not to speak; he did, however, toy with the red card used in Germany’s parliament for the casting of no votes. After 70 minutes’ bad-tempered debate, Kohl’s party was defeated, 292 to 223. The project under discussion would go ahead, more than two decades after its inception.

As Christo Javacheff, who has died aged 84, liked to point out, it was almost certainly the first time an artwork had gone to parliamentary division. Christo, as he was usually known, had conceived the idea of wrapping the Reichstag more than 20 years previously. The building’s appeal to him lay in its history. It was, as Christo remarked, the only structure in a still-divided Berlin “that was under the jurisdiction of the Americans, the Soviets, the English, the French and the two Germanys”. Like the artist himself, it sat on a no-man’s land between warring political systems. “To me, as a Bulgarian refugee who fled communism, east-west relations are very important,” he said.

The once and future German parliament had not been his first choice of wrapped building. In 1961, Christo’s wife and collaborator, Jeanne-Claude (Jeanne-Claude Denat de Guillebon), had suggested he parcel a prison. “It’s much easier to wrap an art gallery, though,” Christo reasoned, “so we started with the Bern Kunsthalle in 1968.”Sy

This interaction would be typical of their relationship. Although the couple’s work was initially attributed only to Christo, it had always been, to a degree, four-handed. “It is also Jeanne-Claude’s,” Christo said of their oeuvre. “All I do by myself are the drawings.”

After 1994, their projects were signed “Christo and Jeanne-Claude”, and their earlier works retroactively catalogued as such. It was a postcard from a friend in Berlin in 1971 that drew their attention to the Reichstag. Christo set about sketching the building the following year, then, in 1975, negotiating with German authorities for its wrapping. In 1977, these plans were turned down, as they were again, with deadening regularity, in 1981 and 1987.

It was the support of the former chancellor Willy Brandt that gave the couple the will to go on. Shortly after the second refusal, Brandt had climbed the five floors to their studio in an old factory in the SoHo district of New York and knocked on its door. “[He] explained that the project was so important that we should not give up,” Christo recalled. Brandt, who died in 1992, did not live to see the fruits of his tenacity.

Wrapped Reichstag, Berlin (1971-1995), as with all of Christo and Jeanne-Claude’s projects, was variously epic. It took 26 years to get permission for The Gates (2005), the 7,503 gates in Central Park, New York, a decade for The Pont Neuf Wrapped (Paris, 1985), eight years to be allowed to put up 3,100 Umbrellas, simultaneously in Japan and California (1991). Each umbrella in this last work was the size of a small house, six metres high by nine wide. The workforce employed in erecting them was 2,500 strong.

Wrapped Reichstag would take this taste for big numbers to its apogee. At dawn on 24 June 1995, 90 professional rock-climbers abseiled from the roof of the Reichstag, un furling 100,000 sq metres of aluminised fabric as they went.

At a stroke, the hulk built under Wilhelm I was transformed into a piece of classical sculpture, the folds of its new skin like the drapery of a Hellenistic statue. The point of this aesthetic reinvention, in the minds of Christo and Jeanne-Claude, was to put the building back into public ownership. The wrapping of the Reichstag had only been made possible by the support of the people. Christo had visited Germany 50 times between 1971 and 1994, canvassed 350 deputies directly. The Reichstag, he reasoned, was owned not by Kohl but by “the German nation, by 80 million Germans”.

Much of the meaning of this and other of Christo and Jeanne-Claude’s works lay in the fact that they were too big to fit in a gallery, too expensive to own – the Reichstag project cost $7m – and short-lived: like most of their pieces, Wrapped Reichstag was up for just two weeks.

These rules were established early on, in works such as Wrapped Coast (1968-69), in which a million sq ft (92,900 sq metres) of the coastline near Sydney was shrouded in fabric by the Australian Army Corps of Engineers, or Valley Curtain (1970-72), where 99 construction workers and helpers pulled a 19,000 sq-metre orange scrim between two mountains in Colorado. (Thanks to an unseasonal gale, this piece lasted only 28 hours.)

For Christo, the more people involved in a project – rock-climbers, fabric makers, MPs, steeplejacks, soldiers, visitors – the more democratic it became. It was a point of honour that these works would be seen by large numbers of people – an estimated 5 million, in the case of Wrapped Reichstag – and for free. Refusing any form of sponsorship, the couple set up the CVJ Corporation in 1982 to negotiate credit lines directly with banks, with the works themselves as collateral. “I use a capitalist system,” Christo said, happily. “Marxist educated, I understand the capitalist system.” That contradiction lay at the heart of both the man and his work.

Born in the small town of Gabrovo in the Bulgarian Balkans, Christo followed a path that seemed predestined. His chemist father, Ivan Javacheff, ran a state fabric factory; his Macedonian mother, Tzveta (nee Dimitrova), was a secretary at the Academy of Fine Arts in Sofia. Their milieu was as progressive as the hardline communism of the People’s Republic of Bulgaria allowed.

At 17, their son signed up as a student at the art school where his mother worked; in his four years there, he would be an ardent exponent of Soviet socialist realism. It was only when he left to study theatre design in the Czech capital Prague in 1956 that Christo at last encountered European modernism.

“When you are young and you discover the relatively small freedom of western art in Czechoslovakia and Prague in the late 1950s, suddenly you dream of going to Paris,” he recalled.

Escaping to that city via Vienna in 1957, the now-stateless Christo was asked to paint the wife of an aristocratic French general. Meeting her daughter, Jeanne-Claude, born on precisely the same day as himself, he invited her out, though she was already engaged, to Philipe Planchon. She went through with the marriage to Planchon, but left after three weeks, and the following year, to the deep disapproval of Jeanne-Claude’s parents, she and Christo were married and had a son, Cyril. In 1964, they moved to New York, spending their first three years there as illegal immigrants.

In the more than five decades of their collaboration they would complete 22 projects; rather more – 37 – were still unrealised at the time of Jeanne-Claude’s sudden death at the age of 74. Christo persevered in bringing to completion projects left unfinished at that time. One exception was Over the River, 15 years in the planning and destined for Arkansas, which Christo cancelled in protest at Donald Trump’s election in 2016.

The London Mastaba – the flat-topped, 20-metre pyramid of 7,506 red, blue and mauve barrels that appeared on the Serpentine in Hyde Park in 2018 – had first been conceived in 1962.

In that year, too, the pair had set out plans to wrap the Arc de Triomphe in Paris. Due finally to appear this year, but delayed by the Covid-19 pandemic, L’Arc de Triomphe, Wrapped is set to be in situ for 16 days from 18 September 2021.

As the years went by, Christo spoke increasingly in the first-person plural, as though his wife were still alive. “We are missing her all the time, you know?” he said in an interview in 2014. “You should understand that living with one person for more than 50 years, we miss many, many things. How vigorously we argued with each other – almost fighting! This is the thing I miss the most.”

He is survived by Cyril, and his brothers, Stefan and Anani.