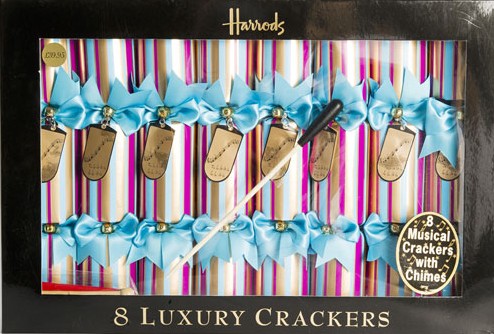 With Britain basking in record temperatures, and 151 days to go until Christmas Day, it may seem rather odd timing for upmarket retailer Harrods to throw open the doors of its festive shop on Thursday.

But as shoppers sizzle in the sunshine, a suited and booted Father Christmas will arrive in style in his sleigh at the Knightsbridge store to try and tempt them into starting their Christmas shopping a little earlier than normal.

As usual, Harrods’ Christmas World department will boast an over-the-top range with eye-popping price tags. The new 8,000-square foot department will have a festive display at its centre incorporating a snowglobe village, a pop-up gingerbread Harrods shopfront, a full-size alpine ski chalet and even a replica of the Tower of London.

Inside the tower will be its most expensive set of crackers – retailing for a whopping £1,299 – although cocktail crackers are more of a snip at £14.95.

Harrods is among department stores, including Selfridges, which have started selling Christmas products even earlier than usual to cater for increasing demand from international shoppers on holiday in the UK.

Many shoppers are Muslims who do not celebrate Christmas, but like to take English-themed decorations home with them. This year, retailers are also hoping to capitalise on the record numbers of international visitors coming to the UK for the Olympics.

Britain should attract a total of 30.7 million visitors in 2012 – spending £17.6bn – according to the tourism body VisitBritain. And Euromonitor International expects 330,000 international visitors to attend 2012 London Olympics and Paralympics. The Department of Transport said it expects 500,000 tourists in London between 17 July and 18 August, with an additional 70,000 athletes and officials. That means an extra 260,000 visitors to the capital compared with the same period last year.

Harrods has been opening Christmas World in the summer since 1998, but changing consumer trends means it has gradually made it even earlier. This year the opening date is the earliest ever for the retailer.

David Miller, director of Harrods Home, said: “Some of our international customers may only visit the UK once this year and so the summer opening of Christmas World is to cater for this seasonal demand.”

A spokeswoman for the research organisation Mintel said: “This is all about capitalising on the sheer volumes of tourists expected over the next few weeks. Harrods is right at the top of the list of destinations and must get a higher proportion of its business from tourists than any other department store.”

Harrods expects to sell more than 250,000 hanging decorations (with prices staring from £1.95) and more than 4,000 boxes of crackers. The union flag is a popular theme for this year and its union flag crackers and 2012 union flag baubles, which are already in store, are selling well.

The store will also be launching a Christmas hamper worth £10,000, although prices for the other 70 hampers in its collection will start from £20.

It is not clear whether Christmas World customers will be treated to the same festive-themed ice creams as last year, which included flavours such as Brussels sprouts, mince pies and mulled wine.